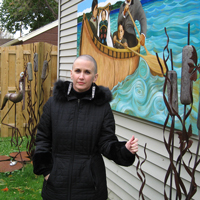 The Grosse Pointe Park ordinance used to prosecute an artist’s husband because paintings were displayed in the couple’s yard is unconstitutional, a Wayne County judge has ruled.

Score one for the First Amendment.

Erica Chappuis and her husband, Laurent Chappuis, have had her bold, colorful pieces at their house for years, and dog walkers, bike riders and other passers-by often stop to admire, discuss and ask about them.

But the city didn’t appreciate them. In fact, they wrote the couple a letter ordering the outdoor art removed two years ago. Under the city’s ordinance, officials said, the paintings are signs which require permits.

When the Chappuises refused, the city charged Laurent with violating the city code. The couple owns the home together, but only Laurent was named in the case, which city attorneys have never explained.

After a November 2007 trial in Grosse Pointe Park Municipal Court, Judge Carl Jarboe found Chappuis guilty in October. Chappuis immediately appealed to Wayne County Circuit Court, the next higher level. In a January hearing before Judge Bruce Morrow, the attorney representing the city contended that Grosse Pointe Park requires permits for signs for public safety reasons, and that, under the statute, paintings are signs.

Morrow, who has paintings and tapestries around his courtroom, issued his brief but effective two-page ruling this week. He found the city ordinance to be “unconstitutionally vague” and reversed the Grosse Pointe Park Municipal Court ruling that found the Chappuises in violation of the city code.

“Reading the entire text, this code does not alert a reasonable person that a permit is required for ‘art’” Morrow ruled.

The Chappuis’ attorney, William Burdett, says he’s “obviously” pleased with the ruling. “The Wayne County Circuit Court has confirmed valuable Constitutional principles that protect everyone’s ability to express themselves on their own property without fear that a vague statutory regime could be applied to squelch that expression,” Burdett says.

City attorney Dennis Levasseur says he just received the opinion, is studying it, and hasn’t discussed any possible steps with city officials.