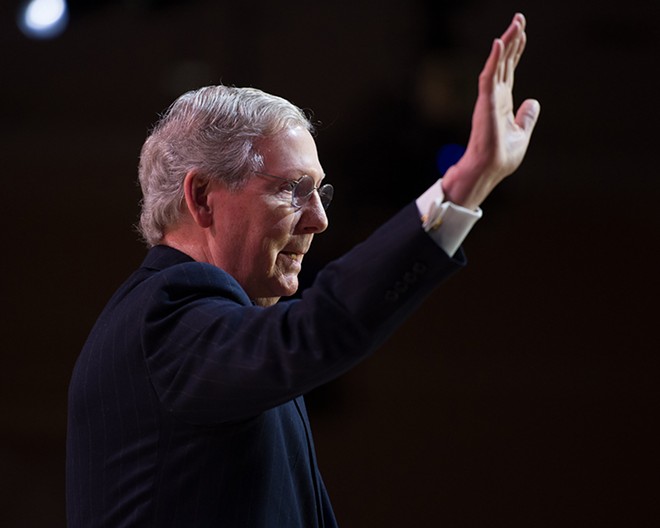 Christopher Halloran / Shutterstock.com
This year, Republicans control neither the House nor Senate. But they’re still planning to drive the country off a financial cliff.

Not without cause, there have been more than a few “Dems in disarray” headlines lately. On Friday, President Biden admitted that intra-party negotiations over his domestic agenda have reached a “stalemate,” with a handful of moderates threatening to sink the $3.5 trillion reconciliation bill if progressives don’t water it down and progressives pledging to sink the bipartisan $1.2 trillion infrastructure deal if reconciliation doesn’t pass.

Failure to pass either would mean failure to pass both, a self-inflicted wound bordering on political suicide. For that reason alone — Democrats need a W — it’s more likely than not to get resolved somehow, this week if Speaker Nancy Pelosi gets her way. Progressives might not like the outcome, but unless they’re willing to take their ball and go home, they’re at the mercy of Sens. Joe Manchin and Kyrsten Sinema.

No matter how much moderates trim the Build Back Better legislation, of course, Republicans will label them tax-and-spend commies anyway.

Even if Democrats navigate those tumultuous waters, they’ll be staring down a more immediate problem. The federal government will shut down on Friday, when its funding expires. A few weeks later, it will begin defaulting on debts, leading to a “cataclysmic” recession that potentially wipes out 6 million jobs and $15 trillion in household wealth.

That would be the most pointless own goal in American history. It would be an end result perfectly befitting this political moment.

In 1917, Congress established a debt limit to prevent agencies in the Wilson administration from effectively spending whatever they wanted. For most of the debt ceiling’s lifespan, it’s was a nonentity. Whenever the national debt neared the self-imposed credit limit, Congress almost always raised it with bipartisan majorities; doing otherwise was too stupid to contemplate. But when the Newt Gingrich-run GOP took Congress in the 1990s, Republicans found in the debt ceiling an opportunity to score political points. After Republicans won the House again in 2010, they went a step further, taking the country to the brink of default while using the debt ceiling as a hostage to extract spending cuts from the Obama administration.

This year, Republicans control neither the House nor Senate. But they’re still planning to drive the country off a financial cliff.

On Monday night, every Senate Republican voted to kill legislation to keep the government open and raise the debt ceiling.

That argument collapses with even the slightest scrutiny. For starters, Republicans aren’t merely saying they won’t raise the debt ceiling. They’re deploying a parliamentary tactic to prevent Democrats from raising it, either. They’re not even allowing a vote.

No less important, Republicans pushed through a massive tax cut—via reconciliation—in 2017 that has added more than $3 trillion to the national debt. President Trump tacked on $7.8 trillion to the debt in just four years, nearly as much as President Obama did in eight after inheriting the Great Recession. Yet Democrats never once played chicken with the global economy.

The American Rescue Plan spent $1.9 trillion; the slimmed-down infrastructure bill will add about $256 billion to the deficit. While its details have yet to be finalized, the reconciliation package will likely contain enough tax increases to fund most if not all of Biden’s climate and social initiatives. In other words, Biden’s entire domestic agenda won’t put as much on the country’s tab as Trump’s tax cuts did.

But hypocrisy isn’t even the point. Raising the debt limit doesn’t spend a dollar or encourage future extravagance. It allows the government to pay off debts it already incurred: bloated Pentagon budgets, wars in Afghanistan and Iraq, Trump’s tax cuts, Bush’s tax cuts, Reagan’s tax cuts, COVID relief packages, the Great Recession, the rising costs of Social Security and Medicare, and so on. It averts a completely unnecessary catastrophe.

The debt limit’s continued existence — a periodic time bomb that serves no purpose other than chaos — is absurd. Absurd options to get rid of it shouldn’t be ruled out: Minting trillion-dollar platinum coins, for example, would allow the Treasury to continue paying debts instead of going into default or halting funding on key government functions. (The White House denies it’s pursuing this Obama-era chestnut, at least for now.) The Biden administration could also invoke the 14th Amendment to say the debt ceiling is unconstitutional — “The validity of the public debt of the United States … shall not be questioned” — declare that ignoring the debt ceiling is its “least unconstitutional” possible action, or create a “special-purpose entity” to issue new securities instead of Treasury bonds, effectively bypassing the debt ceiling.

And Senate Democrats could carve out an exception to the filibuster to raise the debt limit to infinity — or eliminate it altogether — which would be simple enough.

But Democrats rarely do the simple thing. While the Biden administration says it won’t negotiate with hostage-takers, the likeliest scenario still looks like concessions in the reconciliation bill in exchange for Republicans backing down. Indeed, Senate Minority Leader Mitch McConnell is playing chicken with the global economy because he expects Democrats to blink. Unless Democrats are willing to break with anachronistic norms to fight extremism, paying a ransom will be the path of least resistance.

But paying another ransom now will only encourage more hostage-taking.

Mint the coin. Invoke the 14th. Eliminate the filibuster. If all else fails, shoot the hostage. If Republicans are willing to spark a recession, let them — and make sure the world knows it’s on their heads. Extremism — and extreme recklessness — should have consequences.

Get more Informed Dissent at billman.substack.com.