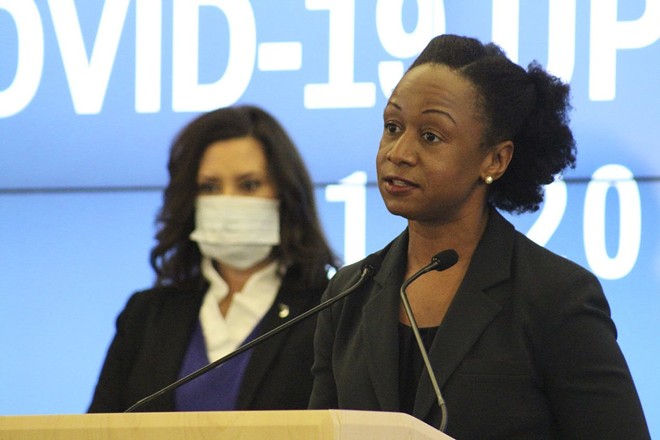 Dr. Joneigh S. Khaldun has resigned from her roles as the chief medical executive for the state of Michigan and chief deputy director for health in the Michigan Department of Health and Human Services, according to a statement sent from Whitmer's office.

According to the press release, Khaldun — affectionately referred to by Governor Gretchen Whitmer as "Dr. J" during the many press conferences they held together during the pandemic — will take on an undisclosed new role in the private sector after more than two years with the state of Michigan.

Her resignation is effective at the end of the month.

"This work has been the honor of my life," Khaldun said in a statement. "I've been inspired by the entire MDHHS team and their expertise and dedication to serving the people of Michigan. ... This is very bittersweet, but I am excited for this new and unique opportunity to continue doing my life's work of advancing bold programs and policies that promote the health of all communities."

Before her stint as the state's chief medical executive, Khaldun was the director and health officer for the Detroit Health Department. Whitmer lauded Khaldun's help in forming a task force to address COVID-19 disparities in communities of people of color, and President Joe Biden eventually selected her to join a national COVID-19 Health Equity Task Force. While serving in those roles, Khaldun continued to work as a part-time emergency medicine physician at Henry Ford Hospital in Detroit.

"Thanks to Dr. J’s around-the-clock leadership, our state acted quickly with the best available data and science to slow the spread of COVID-19 and save countless lives during the pandemic," Whitmer said in a statement. "Michigan has one of the lowest number of cases per capita, and numerous studies show that the tough decisions we made helped save thousands of lives."

However, the pandemic isn't over. In an interview with The Detroit News, Detroit Mayor Mike Duggan warned that Michigan was likely to see a COVID-19 surge this fall as the colder weather forces more people indoors.


"October and November are the beginning of our natural flu season," he said. "The kind of stories you've seen in Florida and Texas, you're going to see in Michigan. This is compounded by the fact the hospitals are talking about being full now — they're not full because their beds are full, they’re full because they can't fill staff positions."

He added, "If you combine a surge in patients with the difficulty filling staff, I think we're going to have a major problem in Michigan in the next couple of months."

He also warned that the surge will be particularly devastating in Detroit, where only about half of the eligible population is vaccinated.

"I'm not sure what there is to do beyond what we're doing," he said of the city's vaccination efforts. "I'm not sure that repeating the same stuff has a cumulative effect. When the COVID rate starts to climb in this state in the next month or two, you're going to see what you saw in Florida — the vaccination rate is going to start to climb."

In the meantime, Whitmer appointed Dr. Natasha Bagdasarian to serve as chief medical executive. Bagdasarian has a background in epidemiology and has served as a senior public health physician with MDHHS for the past year, helping implement a COVID testing strategy for the state.

It appears to be an interim role; according to the press release, Michigan has begun a search for a chief medical executive.

According to MLive, MDHHS director Elizabeth Hertel plans to hire someone separate to serve as the chief deputy for health.

Earlier this year, Dr. Robert Gordon resigned as director of MDHHS. No reason was given, and a confidentiality clause as part of Gordon's $155,000 severance payout prevented either Whitmer or Gordon from discussing the split. Gordon said he was the victim of harassment from anti-vaccination groups.