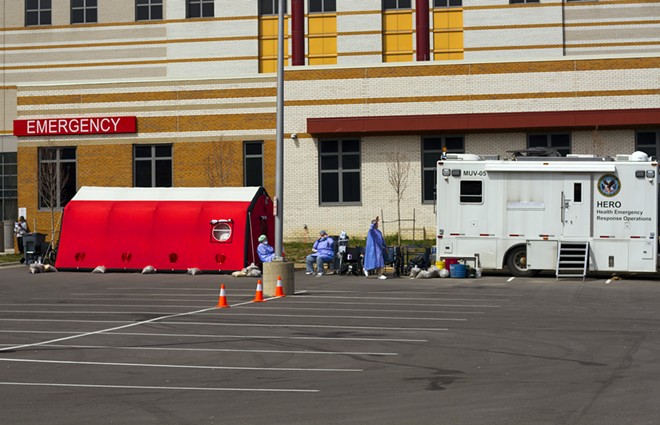 For the third straight day, Michigan reported more than 100 deaths from the coronavirus, bringing its total to a sobering 959.

The 114 new deaths is the second-highest daily increase since the outbreak began last month.

But there is good news: The death toll is not doubling every two days like it was last month. It’s now doubling every five days. A new model from NPR predicts coronavirus deaths in Michigan may peak on Thursday.

Michigan has the third highest number of deaths in the U.S., behind New York and New Jersey.

The increasing number of infections is taking a toll on hospitals, which are running out of ventilators, intensive-care beds, and personal protective gear like masks, gloves, and gowns. Hundreds of health care workers also have been infected with COVID-19.

More than 3,600 coronavirus patients have been hospitalized statewide, and nearly 1,400 are on ventilators, state health officials said Monday. Of those hospitalized, 89% are in southeast Michigan, which continues to see a disproportionate number of new cases and deaths.

The state has significantly increased its testing capacity. So far, more than 45,000 people have been tested in the state.

The coronavirus continues to hit Wayne County the hardest, with 44 new fatalities, bringing its death toll to 446. The county now has 9,626 positive cases, up 581 on Wednesday. Making up 18% of the state’s population, Wayne County has 47.3% of the deaths and 46.5% of the confirmed infections. Wayne County has the highest number of deaths in the nation outside of New York City, the epicenter of the crisis.

Detroit, which has a higher coronavirus death rate than New York City, reported 26 new deaths, bringing its total to 247. The city now has more than 5,800 positive cases, averaging 500 new confirmed infections a day as Detroit increases its testing capacity.

Public health officials believe Black people are generally more susceptible to the coronavirus because they disproportionately rely on public transit, live in closer quarters, and have jobs that require a lot of contact with the public. Poverty and health care disparities also appear to be playing a role in the number of people dying.

"What the coronavirus is doing is exacerbating the racial health gap that has existed in this country for a very long time," Mayor Mike Duggan said during. a press conference Wednesday. "We know that members of this city are more vulnerable to dying from COVID-29 than Caucasians."

Duggan added, "I hope this causes the country to really examine the question of why these racial disparities are allowed to persist."

Eleven of the state’s 83 counties have yet to confirm a COVID-19 case.

Outside of metro Detroit, Genesee County has the most deaths, at 39. The county’s deaths have doubled over the past four days.

Globally, there are 1.5 million coronavirus cases in 184 countries, and more than 87,000 deaths as of Wednesday afternoon, according to Johns Hopkins University & Medicine. The U.S. has more positive cases than any country in the world, with 419,975 confirmed infections and more than 14,200 deaths.