Michigan militias are a grave threat that must be confronted, Nessel to testify 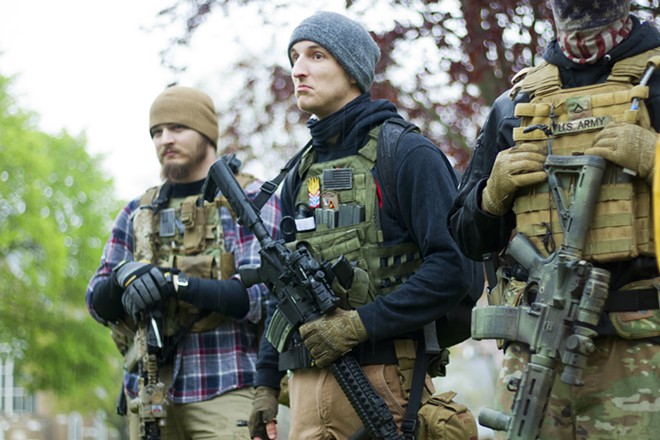 By Steve Neavling
Armed protesters at a rally against Michigan's COVID-19 restrictions in May 2020.

COVID-19 wasn’t the only serious threat to Michigan last year.

In Oct. 14, leaders or associates of Wolverine Watchmen, a militia group, were charged with plotting to abduct Whitmer, take lawmakers hostage, and start a civil war.

About three weeks later, the alleged leader of a militant neo-Nazi movement, The Base, was arrested after authorizes say he tried to terrorize a popular podcaster who discusses the threat of white nationalism. The group was planning to create a heavily armed white nationalist compound in the Upper Peninsula to wage a race war.

These incidents underscore the rising threats of domestic terrorism from militias and white supremacists nationwide, Michigan Attorney General Dana Nessel says in written testimony to the U.S. House Committee on Oversight and Reform. The committee meets Wednesday to examine the increasing dangers of the militia movement and its ties to white supremacy.

“Michigan is the original home of the militia movement and no stranger to the threat of domestic terrorism by violent militia extremists,” Nessel says in the testimony.

“Legitimizing militias, combined with the toxic partisan rhetoric of today and fed by misinformation and disinformation, has led to a marked rise in militia extremism. It has helped to create a climate that nurtures and fosters the deep sense of grievance that extremists hold, which often manifests in violence.”

“Combatting this common threat will require bipartisan support, aggressive solutions, and ample funding,” Nessel says. “Finally, and most importantly, we must acknowledge the impact of the problem: acts of domestic terrorism do not just harm the target of the crime, they threaten the very foundations of our democracy.”

Six months before the Oklahoma City bombing in April 1995, Metro Times investigative reporter Beth Hawkins wrote "Patriot games," an October 1994 article about Michigan's militia movement. Hawkins quoted militia expert Chip Berlet saying, "I personally do not sleep well with groups of armed paranoids who believe the government is behind a totalitarian conspiracy. ... Eventually, they will have a confrontation. It's inevitable."