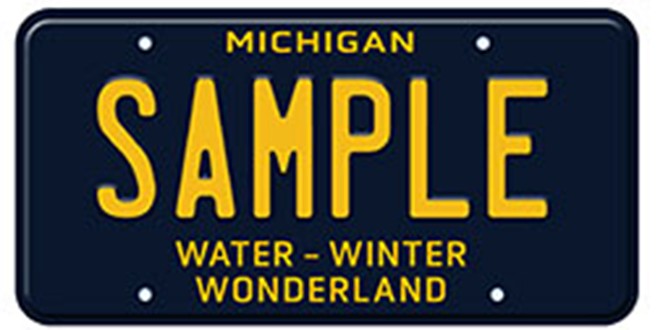 Michigan drivers can now once again rock those old-school license plates that celebrate our "Water-Winter Wonderland."

Secretary of State Jocelyn Benson announced the return of the plates, which feature yellow characters on dark blue and were first issued in 1965, when the National Voting Rights Act became law.

"I am proud to give Michiganders back a longtime favorite license plate that also marks a critical moment in the history of our nation’s democracy," Benson said in a statement. "In 1965, we worked together as a nation to protect and advance voting rights in pursuit of a more perfect union, just as today we must come together as a nonpartisan, pro-democracy coalition to protect and advance our elections."

The plate costs an extra $5, in addition to registration fees. It's also available for disability plates and can be personalized, though it's limited to six characters due to the font used.

The plate is available to order at michigan.gov.

Last year, State Sen. Mallory McMorrow, a Democrat from Royal Oak, introduced legislation to bring back the iconic blue plates with white characters used from 1983 to 2007, as well as the even older black plates with white characters used from 1979 to 1983. Under the proposal, the retro plates could be ordered for an extra $100 to help fulfill Gov. Gretchen Whitmer's pledge to "fix the damn roads."

"Any Michigander who grew up here in the '80s and '90s remembers the simple, iconic design, and knows bringing back the blue plate is a no-brainer," McMorrow said at the time adding, "Classic plate designs give Michiganders the ability to celebrate our unparalleled car culture. Bringing back the blue plate offers a creative way to generate much-needed revenue to help fix the roads without raising taxes."

Earlier this year, McMorrow's office told Metro Times that they were trying to request a hearing this fall to move the proposed legislation forward.