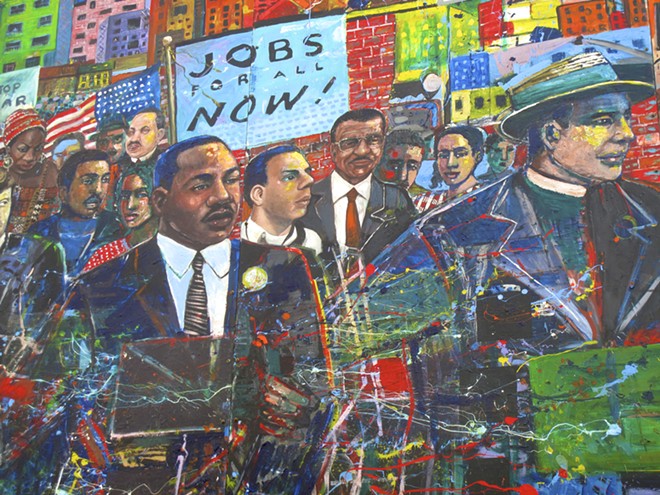 The Michigan AFL-CIO on Tuesday continued its call for a repeal of the state’s Right to Work legislation.

“The teachings of Dr. Martin Luther King Jr. remain at the forefront of our work, and Michigan’s labor movement reminded state legislators of his pro-worker message yesterday,” said Ron Bieber, Michigan AFL-CIO president. “Dr. King’s message was simple: the purpose of so-called ‘right-to-work’ laws is to destroy unions and our ability to improve wages and working conditions for all people. Every MLK Day we see politicians on both sides of the aisle quoting Dr. King. This year they have an opportunity to heed his message by repealing the anti-union ‘Right-to-Work’ for Less policies and fighting for the betterment of all working families.”

King, a civil rights activist, was killed on April 4, 1968, during a visit to Memphis, Tenn., to support striking sanitation workers.

“We’ve got to give ourselves to this struggle until the end,” said King during that visit. “Nothing would be more tragic than to stop at this point in Memphis. We’ve got to see it through.”

Republicans passed Right to Work in 2012 in a lame duck session and GOP Gov. Rick Snyder quickly signed it. More than 10,000 union members and supporters protested the move at the Capitol, which made international news.

Democrats now hold majorities in the Michigan House and Senate for the first time in decades. State Rep. Regina Weiss (D-Oak Park) and state Sen. Darrin Camilleri (D-Trenton) have introduced legislation to repeal Right to Work laws in both chambers. Democrats emphasized their first bills of the new session would protect the rights of workers, women and LGBTQ+ people.

“To truly honor the legacy of the Reverend Dr. Martin Luther King, Jr., we must continue his work toward justice for all working people,” said state Rep. Karen Whitsett (D-Detroit) a co-sponsor of the legislation. “While we reflect on how far our nation has come in the fight for racial and workplace equality, we must also acknowledge how far we’ve yet to go. In Michigan, we can continue to heed Dr. King’s words by repealing so-called ‘right-to-work’ and passing policies that will bring racial and economic justice to the forefront of Michigan decision making.”

The AFL-CIO delivered to legislative offices posters that included a comment by King in 1961 on Right to Work laws:

“In our glorious fight for civil rights, we must guard against being fooled by false slogans such as ‘right-to-work.’ It is a law to rob us of our civil rights and job rights. Its purpose is to destroy labor unions and the freedom of collective bargaining by which unions have improved wages and working conditions of everyone. … Wherever these laws have been passed, wages are lower, job opportunities are fewer, and there are no civil rights. We do not intend to let them do this to us. We demand this fraud be stopped.”

Many Michigan Republicans and business groups remain staunchly opposed to repealing the law. This week, the National Right to Work Committee, represented by John A Kalb, registered with the state as a new lobbying entity.