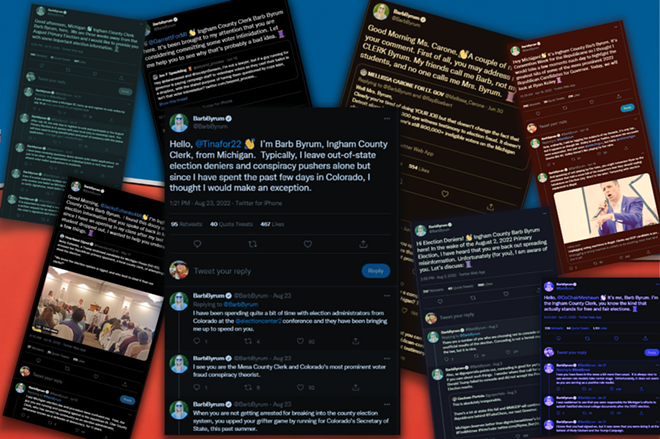 This story is part of a project called Democracy Day, in which newsrooms across the country are shining a light on threats to democracy.

In her free time, she also schools misled and conspiratorial political figures in Michigan with zingy, informative Twitter threads that have earned her online microcelebrity status.

Byrum, a Democratic former lawmaker well-known for performing the first same-sex marriage in Michigan, has amassed even more of a following over the last year for her popular election law threads.

From Michigan GOP Attorney General nominee Matthew DePerno to U.S. Rep. Lauren Boebert (R-Colo.), no public figure is safe from rebuke and a large dose of election knowledge if they spread false information publicly. Some politicos are even copying her signature tweet style that’s known as getting #Barbed.

Many Republicans in Michigan, both currently in office and running for various offices statewide, continue to fuel the false claim that widespread voter fraud was the sole cause of Republican former President Donald Trump losing the 2020 election to President Joe Biden. This, as Byrum and Secretary of State Jocelyn Benson have repeatedly stated, is false.

“In the beginning, I thought there’s no way people actually believe this,” Byrum said of the conspiracy known as the Big Lie. “Now I am of the belief that we have to meet it head-on and aggressively. We need to take on the lies immediately and loudly.”

Before her Ingham County clerkship, Byrum served in the Michigan House from 2007 to 2012 and chaired the House Elections Committee. She showcases her in-depth knowledge of Michigan election law not just with informative threads correcting specific misinformation, but also with deep dives into certain candidates and the lies they have told.

Those include deep dives into all of the GOP gubernatorial candidates pre-August primary, what they polled at, damaging rhetoric they have used — she noted transphobic comments from GOP gubernatorial nominee Tudor Dixon, conspiracy theories peddled by other former candidates like Ryan Kelley and more. Other threads fact-check well-known 2020 election conspiracists like Mellissa Carone, or call out DePerno in July for misleading statements he made about voting tabulators and ballots. 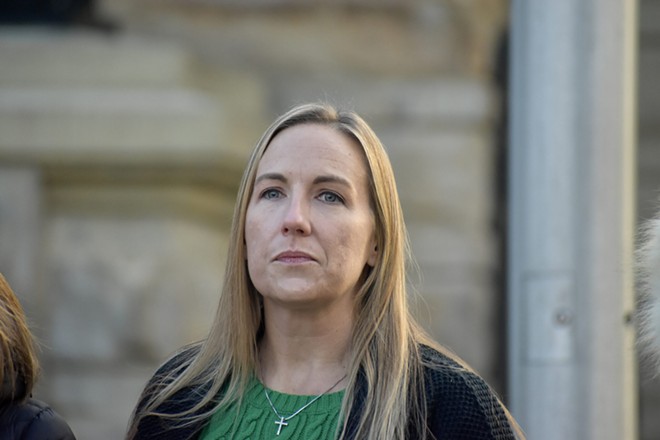 Nancy Wang, executive director of Voters Not Politicians (VNP) which spearheaded the 2018 ballot measure that established Michigan’s first independent citizens redistricting commission and backs the 2022 Promote the Vote constitutional amendment, told the Advance that Byrum is doing something that “needs to be done.”

“She’s educating, in a way where it’s accessible, the information that she’s providing, both to candidates but also to the larger public,” Wang said.

“ … What we have found, and what election administrators have found, is that once people actually go and see how the voting system works, then they understand that our system is secure and it is safe and secure because they can see it for themselves.”

Wang added that she’s “hoping that her tweets can be a way to pique people’s interest, and then have them then take the next step to get more involved in the elections process so they can see for themselves that the way we’re running them right now — the way that clerks and poll workers are running them — is safe and secure.”

The Advance spoke with Byrum about engaging and educating people via social media, what she’s most concerned about leading up to the November election, the most common mistakes candidates make and whether Byrum has her sights set on a potential secretary of state run in 2026.

Hi Election Deniers! 👋 Ingham County Barb Byrum here! In the wake of the August 2, 2022 Primary Election, I have heard that you are back out spreading misinformation. Unfortunately (for you), I am aware of you. Let’s discuss: 🧵

The following are excerpts from the interview:

Michigan Advance: We’ve all seen your Twitter threads where you tell GOP candidates how they’re misunderstanding or violating basic parts of election law, then break down the facts for them. How did you start doing these and what inspired you to?

Byrum: Well, educating candidates and voters one at a time is a slow process. And I had found over the past few months that some of the election conspiracy believers and pushers don’t care to understand, but rather care about forwarding the conspiracy. And quite frankly, with the candidates, I continue to see the same mistakes. Many candidates are making the same mistakes over and over again, so I figured I would utilize social media to try to help them help themselves.

Michigan Advance: What mistakes are you seeing over and over again?

Byrum: Failure to file timely, total misunderstanding of the election process and continuing to spread the narrative that the November 2020 election was anything but fair, secure and accurate.

Michigan Advance: What’s the most egregious one?

Byrum: Well, I think the Big Lie is the most egregious one. And candidates like [GOP Secretary of State nominee] Kristina Karamo, Matt DePerno, [GOP gubernatorial nominee] Tudor Dixon are all adding on and continuing the Big Lie — and as a result, attacking our democracy and putting our democracy at real risk.

Michigan Advance: And aside from that, there’s also just a lot of minutiae to campaign finance and running for office. Your threads are an interesting way to break it down.

Byrum: And elections are run differently depending upon the state. So the states run their elections under state law, so what may happen in one state may not necessarily happen in another state. And I think one of the ways the Big Lie has been able to continue is because people don’t people don’t fully understand election law and election procedures and policies. And then if they do, they understand their state’s specific [rules]. I think that has played a part in allowing these conspirators to continue pushing their lies.

Michigan Advance: Tell me about your #JokeThenVote tweets and how that started.

Byrum: I started that before the 2020 election, because I was waking up already angry. And I decided if I can just have a bad joke every morning, that would help. And that helped for a while, but now I’ve resorted to Twitter threads. But I’m still keeping up on the jokes. And the running. And the coffee.

… My aim is to educate in an engaging way. And if this is how I am able to engage voters and citizens and candidates, then this is what I will do.

Michigan Advance: What issues are you expecting with the 2022 election coming up?

Byrum: CNN just released some video footage of [GOP former state Sen.] Patrick Colbeck ‘training’ these secret operatives — and training is definitely in quotes — these secret operatives to infiltrate the polling locations as precinct workers. So precinct workers are employed by the local city or township clerk, and Colbeck encouraged these individuals to bring their cell phones into these places. Oftentimes cell phones are prohibited because for an absentee county board, ABCB, they’re sequestered. So that’s a concern.

Also, continuing to push the narrative that our election was rigged may disenfranchise voters. They may opt not to participate in the November election. And no matter how safe and secure the election is, there will be people who claim fraud.

Michigan Advance: How do we deal with potentially another year of widespread election misinformation?

Michigan Advance: Are you interested in running for Secretary of State in 2026?

Byrum: That’s a long way away, and right now I am focused on the November 2022 election and getting through this year.

Originally published Sept. 15 by Michigan Advance. It is republished with permission.