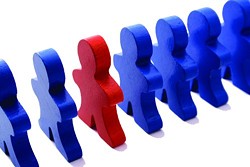 In the article, the author writes “There’s an undercurrent of race in this year’s mayoral race.” An undercurrent, excuse me; there’s more than an “undercurrent” of race — it’s right-in-our-face racial politics!

When mayoral candidate Mike Duggan moved from Livonia, which was tagged as being the “whitest city in America,” moved into Palmer Woods, Nolan Finley, editorial page editor and columnist for The Detroit News, played the “race card” when he wrote an article [asking], and I’m paraphrasing, “Will Detroit voters go for a white mayor,” talking about the possibility of Mike Duggan, at that time an undeclared mayoral candidate, running for mayor.

Finley recently wrote an article that appeared in the Sunday edition, on the Op-Ed page, where he alluded to “us vs. them,” meaning the development going on downtown — white — versus the neighborhoods — blacks.

There are a concentrated number of different ethnic groups who live in the neighborhood — not just African-Americans. This is definitely not an “undercurrent of race,” it’s right-in-your-face racial politics!

Regarding the solution of the reuse of automobile and truck tires, there is an article from a steel trade magazine, called Forward, addressing this issue. (The online archive does not go back far enough for me to provide a link.)

We still have a lot of steel mills in the area, which would give her a ready market for all the abandoned tires. With a little luck, the steel mills wouldn’t have to either grind the tires or remove the steel belts. This would simplify things for recycling.

I wonder if people like those on the Board of Directors of DTE Energy have children and grandchildren. They must be smart or they wouldn’t be on the board; so they’ve got to know the health repercussions from burning coal — the asthma, cancer, mercury poisoning, etc.

Why don’t they insist that DTE Energy move to clean energy? Why don’t they stop sending Michigan money out of state to buy coal instead of spending it in Michigan to build infrastructure for all forms of green energy? I’m an old woman who’s probably not going to be around a lot longer. But I have children and grandchildren who need a planet they can live healthy lives on. And I care about that.

The author is a member of the activist group Raging Grannies of Metro Detroit.