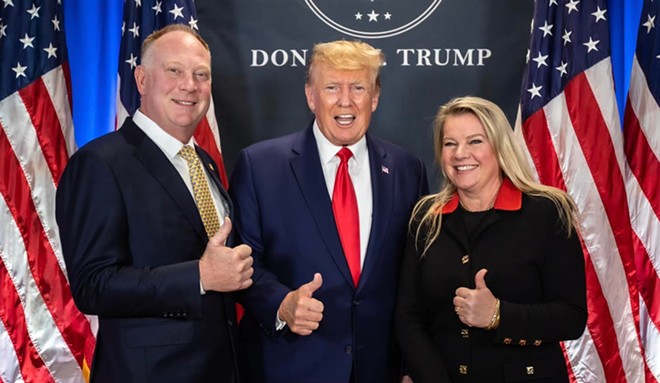 The finger-pointing is intensifying within the Michigan Republican Party as leadership seeks to explain their historic losses on Nov. 8.

Meshawn Maddock, who co-chairs the state party, told supporters in Wayne County last month that the party’s major donors stayed on the sidelines for the election because they “hate” former President Donald Trump.

That’s according to The Detroit News, which says it obtained a recording of the Nov. 22 post-election strategy meeting at a Northville restaurant that also featured her husband, state Rep. Matt Maddock (R-Milford).

The Maddocks are stalwart Trump supporters, who assisted the former president’s efforts to overturn his loss in the 2020 election by participating in a scheme to seat an “alternative slate” of electors on Jan. 6, 2021.

Attorney General Dana Nessel and Secretary of State Jocelyn Benson, both Democrats, also bested their Republican rivals, Matt DePerno and Kristina Karamo respectively, while Democrats took control of both the House and Senate for the first time in nearly forty years.

However, the GOP defeat went even further, as Democrats consolidated their majority on the Michigan Supreme Court and swept every statewide education seat on the ballot.

In the aftermath of that electoral beating, leadership within the Michigan Republican Party quickly tried to affix blame on the candidates, a process that reportedly continued at the Wayne County strategy session.

The Maddocks’ comments came after a memo from Michigan Republican Party Chief of Staff Paul Cordes just 10 days before indicated a split emerging within the party over fealty to Trump and his priorities moving forward.

Cordes also called out Dixon for her lack of fundraising and hardline anti-abortion position — something shared by Republicans up and down the ticket.

While Cordes cast blame on the candidates’ lack of experience and fundraising ability, he indicated that their total adherence to Trump was at least partly to blame.

“Donors for the most part decided against supporting Trump’s hand-picked AG and SOS candidates from the April convention,” said Cordes. “In what many of them saw as sending a message to Donald Trump and his supporters, longtime donors to the Party remained on the sidelines,” adding that “countless hours” had been spent by the party courting donors who expressed concern about “Mar-a-Lago’s influence [Trump] over our process, Party and voters.”

The Maddocks had a decidedly different take.

Maddock, who admitted she did not vote for Dixon in the five-way August GOP primary, told the approximately 60 people in attendance that the gubernatorial candidate failed to raise the kind of money needed for a statewide campaign and might have been more effective setting her sights lower.

During the campaign, Maddock trumpeted Dixon as a “younger, smarter and hotter” version of Whitmer.

Maddock also blamed absentee voting and the turnout among female voters eager to pass Proposal 3, which enshrined abortion rights in the Michigan Constitution. The MIGOP opposed the measure.

“It was mail-in voting that killed us,” she’s reported to have said, adding that it was “painful” to watch “young girls fighting to be able to kill their babies.”

Proposal 3 passed with nearly 57% approval, winning by a 13-point margin.

Meanwhile, Matt Maddock took aim at the family of Trump’s former Education secretary, Betsy DeVos, saying they “screwed” Dixon by not funding her campaign at the level pro-Whitmer groups were toward the general election. The DeVoses were some of Dixon’s earliest and most prominent supporters.

Maddock, who earlier campaigned to be the next GOP House leader, was among eight Republicans who signed a letter in July asking Trump not to work with DeVos, who had already signaled her support for Dixon.

“There is a war going on for the soul of the GOP in Michigan with Trump-endorsed candidates on one side and the establishment DeVos family on the other,” said the letter.

Despite that plea, Trump ended up endorsing Dixon just days before the August primary. He had previously endorsed both DePerno and Karamo, definitively tying his brand to the top of the GOP ticket.

While Meshawn Maddock tried to deflect blame away from Trump during the Nov. 21 meeting, Cordes’ memo was a scathing indictment of the former president and his allies.

Meanwhile, Dixon, DePerno and Karamo have pointed the finger of culpability right back at state party leaders like Maddock and Chair Ron Weiser.

While Weiser has said he will not seek another term at the GOP convention in February, both DePerno and Karamo have jumped into the race, joining Tuscola County Republican Party Chair Billy Putnam, who announced his candidacy in August.

Also running is Lena Epstein; whose last success was running Trump’s Michigan campaign in 2016 before losing a bid for Congress in 2018 and for the University of Michigan Board of Regents in November, and Michael Farage; president of the Grand Rapids Taxpayers Association, who co-chaired the Kent County Trump campaign in 2016 and 2020.

All five are Trump acolytes, an indication that the former president’s influence over the Michigan GOP is likely to remain strong for the foreseeable future.