For generations, parents have embraced the “Golden Rule” as a standard for how to raise kids to be empathetic and respectful adults, even when others may disagree with them. As a father of three children under the age of 8, every day, my wife and I work to do the same. We teach our kids the impact that their words — and actions — can have on those around them.

That is why, as both a father and president of the state Senate, I am so disturbed by the divisive and aggressive rhetoric we continue to hear from the Republican Senate Majority Leader Mike Shirkey.

Over the past year, the Senate Majority Leader has developed a pattern of using sexist and inappropriate language when referring to the governor — the second woman ever elected to the office in this state’s history.

In April, he shared a stage with members of a violent militia group that later plotted to kidnap and murder the governor, and went on to meet privately in his Capitol office with violent militia groups about their efforts to undermine Michigan’s government. Recently, he went so far as to claim the insurrection at the U.S. Capitol last month was a staged “hoax.”

As elected officials, what we do and what we say matters. This is true now more than ever, as Michiganders look to us for leadership in steering the state through this ongoing pandemic and economic recovery.

But rather than focus on these issues — by helping people get the safe and effective vaccine, getting our kids safely back in the classroom, and helping our small businesses survive — the Senate Majority Leader has chosen to spend his time and energy fanning the flames of dangerous conspiracy theories about the 2020 election and the Jan. 6 insurrection in Washington, D.C., alongside continued aggressive, sexist threats and statements about the governor.

This behavior is beneath the office he was elected to and the standard of decency that the people of our state deserve.

As a parent, I would never tolerate this kind of language from my kids — and we certainly should not tolerate it from the highest-ranking Republican elected official in our state.

The Senate Majority Leader’s words and actions are even darker considering we continue to face an ongoing global pandemic that has claimed the lives of nearly 15,000 of our neighbors and loved ones throughout Michigan. In my own life, I have lost 27 friends and loved ones to this deadly virus.

Despite the staggering impact that this virus continues to have on us all, the Senate Majority Leader is shirking his responsibility to model how best to face the crisis at hand, refusing to consistently follow basic public health protocols like wearing a mask, and instead doubling down his focus on attacking Governor Whitmer — literally threatening her to a fistfight on the Capitol lawn — and emboldening violent extremists.

While the Senate Majority Leader made a half-hearted attempt to address his inexcusable language and behavior on Tuesday, and an even weaker attempt during a prayer in Wednesday’s state Senate session, his comments toward me on the Senate floor Wednesday morning tell a different story — as he insisted, he does not take back what he meant in his statements.

It is clear that his so-called apology was not heartfelt, nor did it come from a place of humility and understanding. Rather, it was an empty gesture made for political expediency, and one that the people of Michigan can see right through.

It is time for Republican leaders in the Legislature to publicly denounce these types of conspiracies, attacks against the governor, and divisive, violent rhetoric. And it is long-past time for the highest-ranking member of the Legislature to grow up and join the people of Michigan in fighting our common enemy, COVID-19.

We are ready to turn the corner and end this pandemic — to pave the pathway to recovery for our people, kids and businesses. That will happen more quickly, and allow us to save more lives, if and when we work together.

Garlin Gilchrist II is the 64th Lieutenant Governor of Michigan. 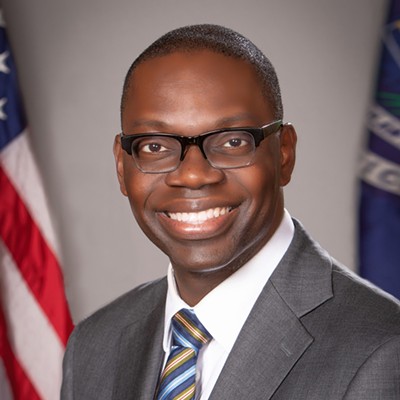