Long before online dating, there was the era of alt-weekly personal ads

Looking back on 40 years of MT 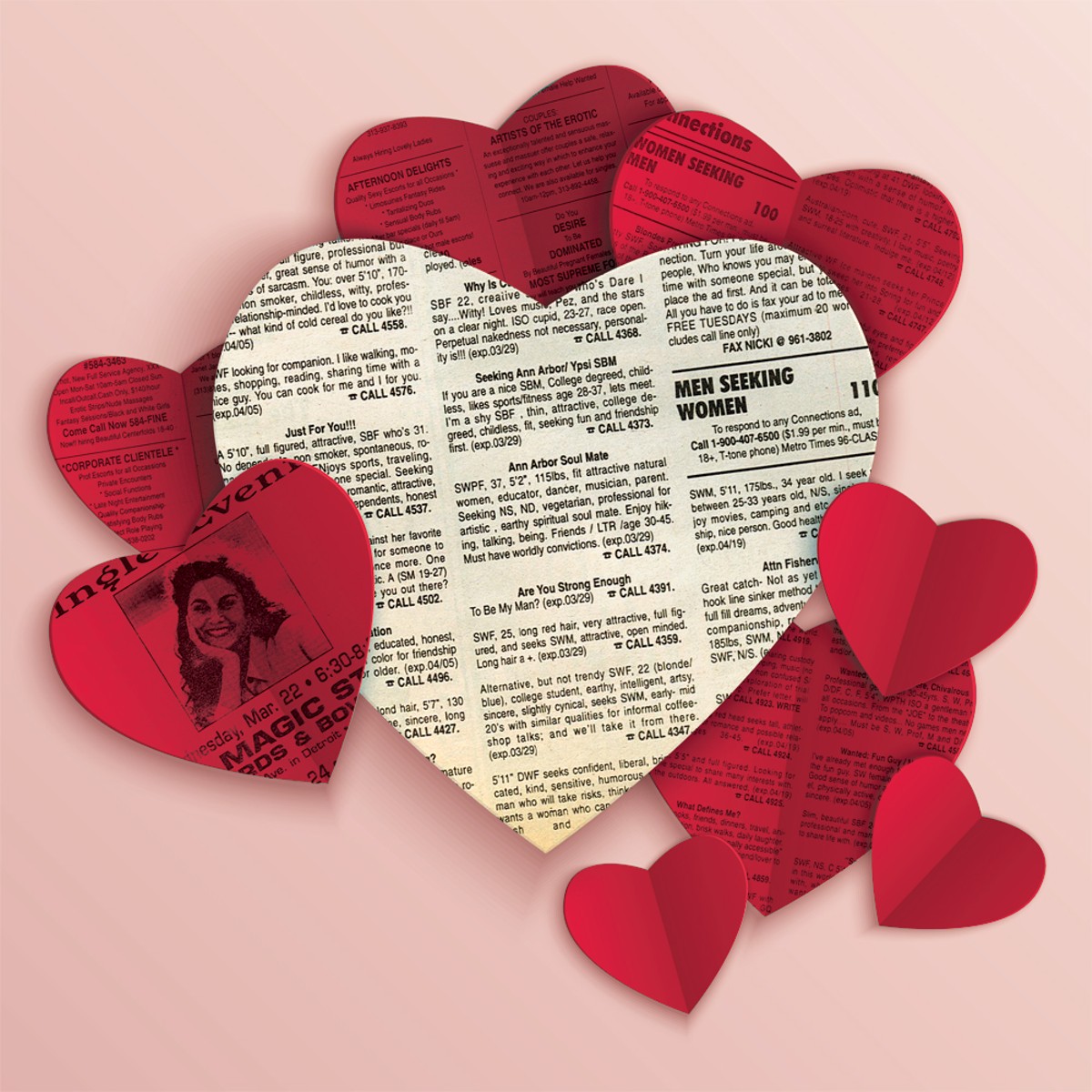 Looking back on 40 years of MT

As we count down to our 40th anniversary in October, we've been revisiting our archives to highlight Metro Times stories that resonate in 2020.

Whenever we flip through our archives of old print issues of Metro Times, we often find ourselves lingering a bit too long in the classifieds section — specifically, the personal ads.

Of course, there's nothing for us here, at least as the ads were originally intended. These people all shot their shot for love a generation ago. Still, we can't help it: Even though the ads are just brief blurbs, it's great people-watching, so to speak. In the heyday of the alt-weekly, the personal classifieds were like the seediest pickup bar where anything goes.

Here's how it worked, at least according to this issue from 1990: For $5 you could place a 15-word classified ad printed in the back of MT, plus another $5 for each additional set of 15 words. For $10 you got a P.O. Box, where interested parties could send correspondence, and each Wednesday MT would send you a manila envelope filled with the responses, which could include photos. If you were high-tech, you could pay $9.95 to get a (then-) all-new Metro Times Romance Hotline, where you were assigned a 5-digit code and password to access a voicemail where interested parties could leave you 60-second message (which you could access for 95 cents per minute).

In today's age of online dating — of sexy selfies and seemingly unlimited options, the next one just a swipe or a click away — the idea of using only words to generate interest seems a bit, well, quaint. And the brevity of the ads dictated an economy of words: no room for Shakespearean sonnets here. Of course, personal ads developed their own secret language of abbreviations: a single white male in search of a single Black female who doesn't smoke for a long-term relationship was thus a SWM ISO SBF N/S for LTR. Beyond that, there was just a little bit of room to get creative.

We're not alone in our gawking. Lisa from Waterford, a self-described "OK Boomer," says she and her friends used to love to browse the classifieds just for amusement. While she never placed an ad herself, her friend Kim met the man she's still married to through Metro Times. It was the first ad she posted.

How did Kim get so lucky? Well, 99% of her responses were from dirty old men. "There were a lot of dick pics," she says. "But looking back, I know why I got so many dirty responses. Lisa and I had a few drinks and we wrote, 'Working girl works too hard. Give me a reason to blow off work.'" Ugh, men.

Kim says she liked George's simple, humorous approach: he sent a photo of himself at a golf driving range with the caption "It takes a lot of balls to answer a personal ad. So here's a few hundred."

"It was meant for fun," Kim says. "And it ended up being true love."

We asked other readers to send us their stories of using MT's personals. One reader says she met her wife through an ad placed in MT in late 1989. "I had to wade thru many women that wanted to have sex with another woman," she says via email. "Sometimes fun, sometimes scary (when the boyfriend came home and got pissed!) Older, younger, Black, white. It was quite a ride! Finally I got a letter (this was the era before VM) and had to chase down this woman who wrote me."

The ad, she recalls, read something like this: "I like football, going to the movies, and watching Murphy Brown! I like to cook, in the kitchen and the bedroom!" She says they've been together for 30 years in October and married for five — and were among the first 300 to be married when same-sex marriage was legalized in Michigan.

Former Metro Times copy editor Vic Doucette says he met his wife through MT's classifieds. "Both Cindy and I had difficulties in the traditional dating scene," he says. "She's fat. I have cerebral palsy, grew up awkward and clumsy and have a permanent limp. A high school classmate once said she wouldn't go out with me because I walked funny. Each of us chose to mention these physical issues in our ads, believing that a self-selection process would eliminate people who couldn't deal with us as we were. It worked." They married in 1992 and have been together since.

Andrea Rude says she used to love to read the ads. "I always checked them. There were some that were really bizarre," she says. "One was like, 'Man seeking sex slave.'"

She says that while she placed an ad, nothing really panned out. "I went on a lot of interesting dates," she says.

But when she started a public access TV show called Regenerate TV, she used her experiences as inspiration for a recurring comedy segment called "Personal Ad" inspired by MT's ads.

"It was about this girl who couldn't afford to eat out anymore," she says. "She hated to cook. So she decided to place an ad in order to go out on dates and get free dinner."

Of course, hilarity ensued. "It was like all the dates that she went on, and they were all, like, stereotypical people," she says. "Like there's this philosopher guy who, you know, she just couldn't understand the word he was saying. Then there was a cheap date night who took her to American Coney Island and ended up skipping out on the bill. There was like this 'Italian Stallion' guy." In one episode, she gets in a road rage thing with somebody on the highway on the way to Como's — and then that ends up being her date.

The classifieds peaked in the '90s, with pages and pages of personal ads, withered in the 2000s with the rise of websites like craigslist, and dried up even more in the era of dating apps and social media. But for a while, there was something magical about the classifieds.

After Rude lost her passport at Pontiac's Industry nightclub in the early 1990s, she placed a lost ad in MT and renewed it every week for six months to no avail. But a year later, somebody who found the passport that night contacted her after they saw an old issue of MT at a friend's house.

"I had given up completely," she says.

Sometimes someone finds that message in the bottle.

The best of our back pages

Here are some of the ads that stopped us in our tracks while flipping through our archives:

ATTENTION! ATTENTION! ANY FEMALE WHO ATTENDED OR THOUGHT OF ATTENDING THE BUTTHOLE SURFERS CONCERT, OCT. 14: I am a SWM, 27 years, 6’0’’, 180 lbs., I appear to be a normal, upstanding citizen but actually am an interesting person. Send me a humorous letter and I will reply with an original song. Hey, you can’t lose, at least you get a free cassette tape. (Nov. 1-7, 1989)

George Costanzaesque
SJM, 24, ISO his Elaine Beneseque NS-SWF. This sit-com will include: spontaneous conversation and adventures, late night coffee and most important, sharing all the humor life has to offer. (Feb. 12-18, 1997)

Looking for a gothic romance worthy of chills and shivers. Intelligent SF with wicked looks and a killer personality seeks a pale boy with dark eyes to conjure up a bit of smoke and thunder. Enjoy classical music in minor, B&W horror movies, castles and gardening. (June 4-10, 1997)

Why Are We
Writing magazine copy for them? Shrewd sexy PF, amazed/appalled at this, other Americana while park jogging, cooking Thai/Mex, going out alone. PM’s 30-45, hunky and argument deprived invited to jointly intellectualize. (Sept. 17-23, 1997)

STRAIGHTEDGE
Old skool sk8 betty/19yrs old ISO other edgers to just hang out with, go to shows, whatever. This is what it takes to find drug free youth? (June 4-10, 1997)

What’s The Point
No matter what you write, people respond. GWM 28, brown/blue, good looking, seeking someone who is both good looking and has a good head on his shoulders for possible relationship. That’s the point! Honest and sincere 29-39. (Sept. 17-23, 1997)

WHY, WHY, WHY
Why do I watch Nickelodeon? Why do I like walking in the rain at night? Why am I an engineer? Why do O listen to Ace of Base, Phillip Glass, U2, Grand Funk, Wolfgang Press and the Cure? Why do I like long conversations in front of the fireplace with a good friend and a bottle of wine with munchies? Why do I like dining out and seeing movies, plays and concerts? Why am I a 40 YO DWM? Why am I 6’ and 200lbs? Why am I open minded and sincere? Why is race not important? Why am I home alone on Friday (and every other night?) Did you ever wonder why? Call and maybe together we can answer our questions together. (Aug. 6-12, 1994)

Artsy, intellectual, Sci-Fi loving SBF of 24 seeks creative, SM 23-30 who knows the difference between fantasy and reality, but doesn’t care. Must know enough about the real world to live productively in it, but have enough imagination to survive it. (June 1-7, 1994)

Homely, smelly SWM, 50, seeks homely, smelly WF for companionship. (This ad ran for months until it stopped. We assume he found his true love. ❤️)