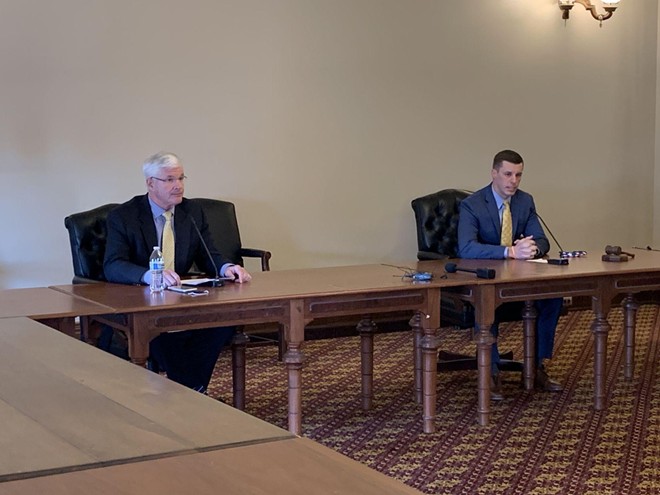 The Michigan House and Senate filed a lawsuit Wednesday in the Court of Claims challenging Gov. Gretchen Whitmer’s authority to extend the state of emergency unilaterally.

The debate hinges on whether Whitmer can extend a state of emergency without the legislature.

Chatfield said it was “very clear" she couldn’t.

"Only the legislature has the power to extend the state of emergency," he said.

The legislature on April 7 approved an emergency declaration through April 30, but declined to extend it further. Lawmakers instead passed a bill seeking to codify many of Whitmer’s executive orders into law.

Whitmer extended the order herself through May 28, citing a 1945 law that she said allows the governor to extend the emergency for as long as necessary.

Whitmer vetoed the legislation this week. She's said that health experts, science, and data would lead her decisions instead of negotiations.

The lawsuit argues that the 1945 law governs only local emergencies.

Republicans say Whitmer’s blanket actions are smothering Michigan’s economy. COVID-19 cases have been concentrated near Detroit, a small part of the entire state.

Shirkey said some emergency action was still necessary, but that Whitmer has refused to work with the legislature in making decisions.

"We can't see behind the secret curtain," Shirkey said. "Information is not being shared with us. The decision processes are a mystery to us."

Chatfield said that Michiganders are bearing the brunt of the orders.

“Local communities have been devastated even in areas where the virus has hardly made an appearance,” Chatfield said in a statement. “Thousands of small family businesses have been shut down unnecessarily and with no benefit to the public health."

"The people we represent need a better plan, and we want to work with the governor to help her do better," he said.

The suit seeks an immediate declaratory judgment against Whitmer’s orders.

“We firmly believe the governor is acting beyond her authority and has left us no choice other than to seek clarification from the courts,” Shirkey said.

“Let us be abundantly clear: this lawsuit is driven solely by legislative Republicans and has no support from the Senate Democratic Caucus,” they said in a statement. “We are appalled that those across the aisle are choosing a global pandemic as the time to pick political fights with the governor instead of focusing on what we can do to help the people of our state.

“The Senate Democrats aren’t taking their eyes off the ball. Finding solutions for Michigan families and workers remains our number one priority.”


Chatfield said that the suit was “very avoidable” but “necessary.”

“It’s a sad day for our state because we truly should all be working together,” he said. “We should be partnering together rather than having a battle in court, because no one truly wanted to have that.”