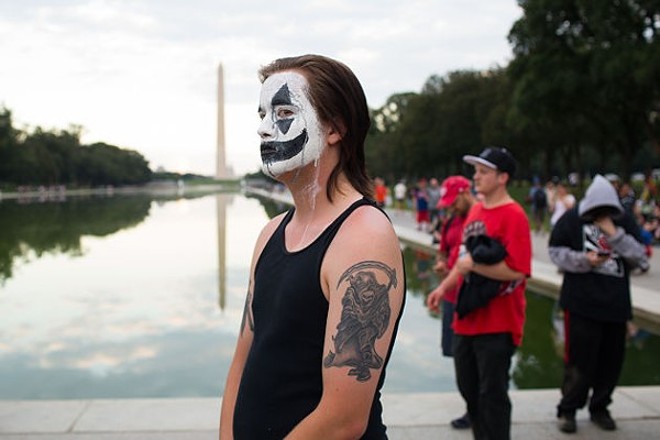 Photo by Daniel Shular
Rusty is having serious second thoughts about going through with this. A large man with wire-frame glasses and a goatee — clad in an Insane Clown Posse shirt, naturally — he's traveled more than 2,000 miles from what he refers to as “a little podunk town that’s 30 minutes from the Colorado border” to be in Washington, D.C., today. Still, he’s not without reservations. “The only reason I’m here is my buddy paid for my ticket, you know what I mean? It was non-refundable,” Rusty explains. “Because I would have told him, ‘Never mind, I ain’t gonna go deal with all that. It’s not gonna turn out how you guys want it.’” That friend’s reply to the oversized Rusty was, he recalls, simple: “You’re my riot shield.”

It is the afternoon of Saturday, September 16, and Rusty is riding in an Uber to the Lincoln Memorial along with a man named Mike, who is also quite large and also clad in ICP gear. They are only two of the thousands of Insane Clown Posse fans — more commonly known as “juggalos” — set to descend on our nation’s capital today for the “Juggalo March on Washington.” Rusty’s apprehension stems from the fact that there is a nationalist pro-Trump event billing itself as the “Mother of All Rallies” also scheduled today at the National Mall. Anti-fascism activists already have that event in their sights and are making plans to counter-protest. In the wake of the violence and chaos surrounding the recent “Unite the Right” rally in Charlottesville, anxiety has been running high in the juggalo community in the weeks leading up to the big day.

Photo by Anjeliqa Pratt
The pro-Trump "Mother of All Rallies" was scheduled for the same day as the Juggalo March,.
They are, after all, the only group out of the bunch that the FBI officially considers dangerous. In its 2011 threat assessment report, the law enforcement agency branded juggalos as a "loosely organized hybrid gang," claiming they "exhibit gang-like behavior and engage in criminal activity and violence." The members of Insane Clown Posse took issue with the label and joined forces with the ACLU, filing suit against the FBI in an effort to get it removed. A Michigan court threw the case out in July 2014, saying the band and its fans could not prove harm had been done by the classification. In September 2015, that finding was overruled by the U.S. Court of Appeals. A new court date has not yet been set. It's true that Insane Clown Posse's music is vulgar, even violent. Since ICP got its start in the early '90s, the duo has peddled shock-rap with horror themes — your average ICP song tends to clock a pretty substantial body count. Even the group's biggest mainstream single to date, 1997's "Halls of Illusions," sees one man's throat ripped out, one man's throat cut out and a third man with a broken bottle shoved through his ear before the song is over. But all that blood was spilled as punishment for each victim's sins — one a bigot, one a wife beater, one a child abuser. ICP songs often see evildoers getting their comeuppance. The members of the group have referred to these stories as "parables," and their 2002 release The Wraith: Shangri-La even includes a song called "The Unveiling," which explicitly states that the band's secret message since the beginning has always been to follow God. It's also true, though, that some juggalos have committed acts of real-life violence. One fan of the group was sentenced earlier this year to three and a half years in prison after he chopped off a woman's pinky finger with a machete. He then sliced his own arm, and hers, and the two of them drank their own blood out of a shot glass as a tribute to a juggalo who had died. (The pinky was put in the freezer, to be consumed later.) Then there were the two Maryland men who attempted to carve and burn a juggalo-related tattoo off of their housemate's arm in 2014, saying he hadn't "earned" it yet. Those outlandish acts of violence are outliers, the group argues. The March on Washington aims to show the world that juggalos aren't the criminal gang-bangers that the FBI claims them to be. But Rusty is afraid the whole thing is going to backfire. "I think it's gonna go south," he says. "It's gonna set that gang label in stone. That's just my opinion. Because then obviously we can't come to a peaceful protest without something breaking out. "If it doesn’t I'll be surprised," he continues. "Especially with as drunk as I’ve seen a few people this morning, and acting a fool already. It was at 8 o'clock this morning, already drunk, and they’re like, 'You want a beer? You want some edibles?' I’m like, 'Oh god, no dude, wrong thing to do.'"

Photo by Daniel Shular
The towering statue of Abraham Lincoln perched on the east side of the National Mall has seen many historic sights over the years, but the large group of face-painted, self-professed "wicked clowns" gathered before Honest Abe today would surely give him pause. After all, their assembly is quite a thing to behold. KRS-One's "Sound of Da Police" plays from a stage facing the reflecting pool at the bottom of the stairs at Lincoln's feet. Thousands of juggalos fill the space, carrying signs with slogans such as "Clown Lives Matter," "Faygo Not Fascism" (a nod to the group's carbonated beverage of choice) and "Grab America by the Posse" (featuring a photo of Donald Trump altered so that he appears to be wearing juggalo face paint). Some entire juggalo families are in attendance; some infants are even painted up like clowns as well. A young girl, no older than ten, is here with her wicked clown parents. Her sign, which she made herself, is punctuated with hearts surrounding a simple message: "Juggalos should be treated better. Don't judge a book by its cover."

Photo by Daniel Hill
Close to 2:30 p.m., Kevin Gill, host of a juggalo-affiliated internet radio show and master of ceremonies for today's events, takes the stage. He is wearing Psychopathic Records' "hatchetman" logo — according to the FBI, a gang symbol — on his hat, shirt and two separate necklaces. "Juggalos and juggalettes, welcome to the most important day in juggalo history," he begins. "There's been a lot of monumental events and gatherings and moments and all that shit, but none of it can hold a candle to what we are all doing right now. Can I get a 'whoop whoop' that you can hear in the White House?" The crowd responds thunderously with a hearty "whoop whoop" — a common greeting among juggalos. "Today, as you know, is the Juggalo March," he continues. "We've got incredible speakers from in and around the juggalo world that are gonna drop knowledge. They're gonna share their testimonials about their experiences, what has happened to them. And that's why we are here today: to change this bullshit classification, to end profiling of juggalos and to give us back our fucking civil rights and our first amendment rights. Whoop whoop!" Turn the page as the juggalos make their case they've been harmed by the FBI's designation