Judge strikes down gun ban at Michigan polls, so maybe you should just vote early before all the nuts come out 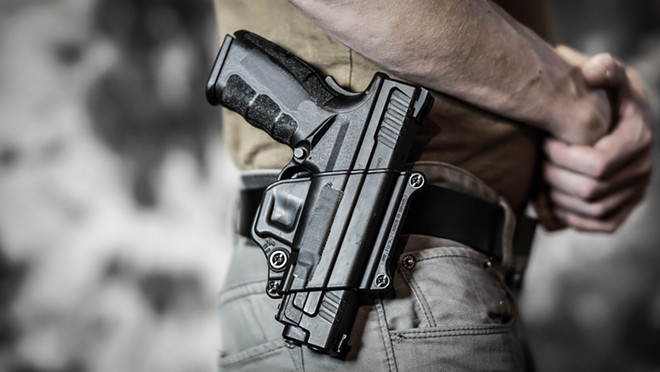 On Tuesday, a Michigan judge struck down Secretary of State Jocelyn Benson's directive banning the open carry of guns at polling places on Election Day — increasing the potential for violence under already explosive circumstances.

Benson issued the directive earlier this month following President Donald Trump's campaign calling for an "Army of Trump" to monitor the polls, and after law enforcement officials said they thwarted a domestic terrorist plot against Gov. Gretchen Whitmer.

A recent report placed Michigan among five states with the highest risk of violence during and after the election. Another report predicted the U.S. is especially susceptible to violence due to the widening chasm of inequality. (Hmmmm, if only there was a candidate who ran explicitly on fixing that...)

Due to the increased demand for absentee voter ballots, officials say we're unlikely to see results on Election Day, and are urging people to be patient while they tally every vote. This could also fan the flames of civil unrest, especially if Trump casts doubt on the legitimacy of the process. (He already has.)

Attorney General Dana Nessel ordered Michigan State Police troopers to help keep the peace at polls, and the NAACP also said it will also monitor the polls for voter intimidation. Benson and Nessel both said they will attempt to appeal the decision blocking the open-carry ban, but with less than a week until Election Day, who knows what will happen.

Anyway, with all the threats of chaos on Election Day, you might want to consider voting early so you don't have to deal with any of these armed nutjobs.

Given Trump's cuts to USPS, it's too late to send your absentee ballot by mail. (It needs to arrive by Election Day.) But you can still request an absentee ballot and return it to your local clerk or a designated drop-box.

See our voter guide for more information — and please be careful.