Judge rules for tribe in Line 5 suit, says Enbridge is trespassing and must pay damages 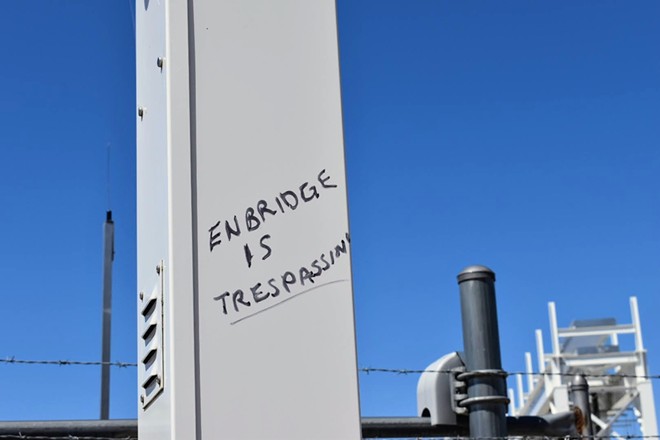 Short of an order to decommission the Line 5 pipeline, an Ojibwe tribe on the south shore of Lake Superior secured a different legal victory Thursday in its federal lawsuit against Canadian pipeline company Enbridge.

The Bad River Band of the Lake Superior Tribe of Chippewa Indians has been locked in a legal battle with Enbridge since July 2019 over the company’s continued operation through 12 miles of Bad River Reservation land, despite a major easement between the parties being expired since 2013.

The embattled Line 5 pipeline originates at the tip of Northwest Wisconsin and continues for 645 miles into Michigan’s Upper Peninsula, under the Straits of Mackinac and out into Canada near Detroit. The pipeline corridor that traverses through the Bad River Reservation is approximately 60 feet wide and transports about 23 million gallons of crude oil and natural gas liquids daily.

In the 56-page ruling in Wisconsin’s Western U.S District Court, Judge William Conley found that Enbridge has been trespassing since then and should pay damages to the tribe. He at one point called one of Enbridge’s arguments “tone-deaf and meritless.”

Conley did not move to immediately decommission Line 5, as the tribe had ultimately hoped, for “public policy reasons” that require the input of more parties. But the judge did put a five-year timeline in place for Enbridge to build an off-reservation reroute — which the tribe also opposes for environmental reasons — or face increased monetary penalties.

“This ruling is a turning point in the battle to protect Indigenous rights and the Great Lakes — it underscores again why Enbridge Energy should shut down Line 5,” said Beth Wallace, Great Lakes freshwater campaigns manager for the National Wildlife Federation (NWF).

“This is a major victory in a battle that should have never taken place. The ruling shows that Line 5 should have been shut down in 2013. Enbridge does not deserve additional time to inflict harm on the Bad River Band,” Wallace continued.

Since the tribe did not request a specific amount of monetary relief and neither side addressed how a profits-based remedy should be calculated, Conley said parties will now submit supplemental briefings on how the court should determine the monetary relief to which the tribe is entitled, and whether the ultimate decision of a dollar amount should be resolved by the court or a jury.

A virtual status conference in the case is scheduled for 2 p.m. Friday.

Enbridge also claimed victory in the case on Thursday, with spokesperson Ryan Duffy saying in a statement that Conley’s ruling “affirmed” the “importance of Line 5” and “recognized that the Line 5 relocation project needs to move forward in a timely fashion.”

“Enbridge remains open to resolving issues amicably with the Bad River Band of the Lake Superior Tribe of Chippewa Indians as we also continue to focus on providing consumers and industry in the region with safe, reliable energy,” Duffy said.

Enbridge and the Bad River Band have been involved in easement dealings since Line 5 was built in 1953. The U.S. Bureau of Indian Affairs (BIA) oversaw two 20-year easements that covered all panels on the tribal reservations.

Enbridge, seeking a longer easement on 13 parcels owned by the band itself by the time the second easement was set to expire, was advised by the BIA in the 1990s to negotiate directly with the tribe.

The remaining 15 parcels of land, then owned by tribal members and some in part by the tribe, had a separate agreement the next year. The easements in 1993 stated that Enbridge would pay $179,000 total to the individual owners of each parcel for a 20-year easement. Those easements ended in 2013.

At that time, Enbridge attempted to renew the latter agreement but failed to prove that the owners of the parcels had consented to a renewal.

The tribe was also now newly concerned about the environmental safety of Line 5, given that just three years earlier Enbridge’s Line 6B pipeline had caused a catastrophic crude oil spill in a tributary of Michigan’s Kalamazoo River.

Discussions between the tribe and Enbridge continued in subsequent years, and the tribe eventually stated in 2017 that it was unwilling to consent to new easements. It also stated that the Bad River Band would take steps to initiate the pipeline’s decommissioning.’

The tribe also argued that Enbridge has been trespassing on the 12 parcels since the easement’s 2013 expiration, and was required by the agreement to remove the pipeline within six months of expiration.

Nonetheless, Enbridge has refused to remove the pipeline from the reservation and continues to transport oil across the lands.

The Bad River Band filed suit against Enbridge in federal court in July 2019 over claims of trespass and unjust enrichment in regards to 12 former allotment parcels which the band now has full or partial ownership, and which Line 5 continues to operate through.

The tribe also raised claims of nuisance, ejectment and violation of regulatory authority against Enbridge for continuing to operate Line 5 on the tribal trust parcels that are under the 50-year easement.

In response, Enbridge filed counterclaims for breach of contract and its underlying duty of good faith and fair dealing. The company contends that the 50-year agreement implicitly obligates the tribe to consent to renewed easements over all parcels in which the band has ownership, including the other 12 parcels that were privy to the since-expired 20-year easements.

This argument “rel[ies] on a strained and unpersuasive reading of the 1992 Agreement,” Conley wrote Thursday, which “ … would be to ‘read language into a contract which is not there.’”

“Enbridge accepted the risk and paid $800,000 for a 50-year easement over the Band-owned parcels, while paying less for 20-year easements on the other parcels. Although Enbridge’s gamble did not pay off, it is not absurd for the court to enforce the contract provisions to which the parties plainly agreed,” he continued.

Conley also emphasized the tribe’s autonomous power, writing that the court must construe all contracts to avoid “foreclosing the exercise of sovereign authority.”

Originally published Sept. 9 by Michigan Advance. It is republished with permission.