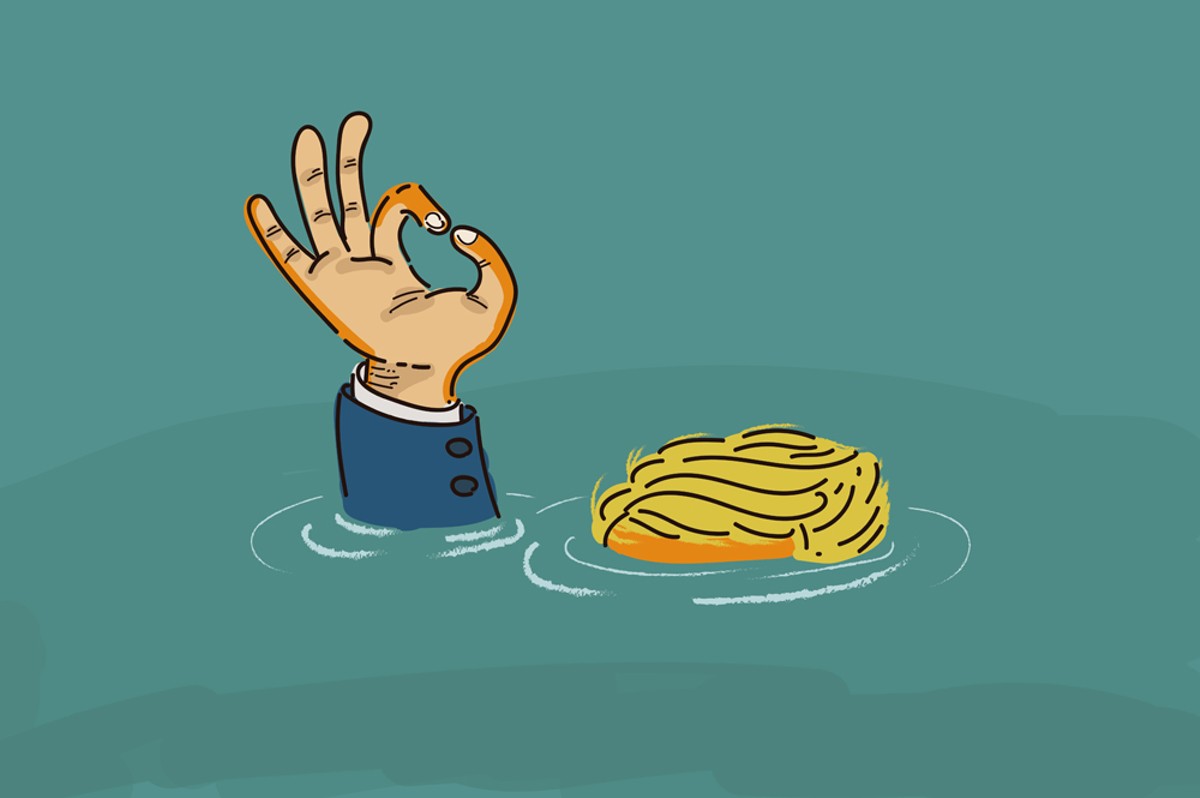 Last week, Quinnipiac University dropped a poll showing the top five Democrats besting Donald Trump by somewhere between nine and 16 points among registered voters. More important, no matter the matchup — whether Biden or Buttigieg —Trump can't get above 40; his approval rating is stuck at 38%.

Grain of salt: Quinnipiac, though a top-rated pollster, tends to be one of Trump's poorer-performing polls. As of Friday, FiveThirtyEight pegs the president's approval rating at 42.2% among registered or likely voters, and 40.2% among all adults.

Presidents don't win re-election with those kinds of numbers.

If you're working Trump's campaign, the silver lining is that he becomes a better politician when he has a clear enemy. The 2020 campaign will be defined by Trump's efforts to make the Democratic nominee as despised — or at least feared — as he is. But what should keep his pollsters up at night is how static those numbers are; they've barely budged since January 2018, even amid a growing economy.

Trump, pathologically craving the applause of die-hards in crowds and on cable television, has always managed to trample on his own good news, whether through draconian immigration policies or crazy-making, headline-grabbing tweets. He's dominated each and every news cycle of his 136 weeks in office — increasingly, it seems, to his own detriment.

And all of a sudden, the economy no longer looks so rosy. The trade war with China, something he famously promised would be easy to win, looks like a massive own-goal. The Department of Labor sharply rolled back its job-creation estimates. Economists are increasingly worried about a recession. And while Trump's presidency has always been grueling, this past week was especially frenetic, especially frantic, especially cruel, carrying more than a whiff of resentment and cold-heartedness and desperation.

Almost as if Trump has figured out how fucked he really is.

I tried to pin down one story that summed this up. But I think it's more useful to focus on the forest than the trees.

We could start with the not-so-unusual batch of insanity: the report about Trump wanting to nuke a hurricane, for instance; or the news that Trump had invented from whole cloth a story about "high-level" Chinese officials asking to restart trade talks in an effort to juice the flagging stock market.

From there, we could jump into the par-for-the-course hypocrisy: his campaign's fundraising email suggesting that Rep. Alexandria Ocasio-Cortez's call to abolish the Electoral College favored "Coastal Elites and Liberal Mega Donors" — with the special racist touch, "This is our country, not theirs" — though Trump himself had once called the Electoral College a "disaster for our democracy"; or Trump's denigration of possible primary challenger and Appalachian Trail hiker Mark Sanford, though he'd reportedly raw-dogged a porn star shortly after his third wife gave birth to their son; or Trump saying that "never in the history of our Country has someone been more thoroughly disgraced or excoriated than James Comey," as if his Department of Justice wasn't targeting his enemies, as if Trump himself wasn't excoriated in the Mueller report.

But let's skip all that in favor of the pointless damage Trump will inflict on the world in service to his ego. Last week, the administration announced that it would seek to roll back rules limiting the emission of methane, even though fossil fuel companies themselves support those rules. To Trump's EPA, methane should never have been regulated in the first place. But the rules were enacted under Barack Obama; Trump is eliminating them out of spite. He did the same with car emissions standards, then lashed out at automobile companies that agreed to abide by them anyway.

There's also the pointless cruelty he's fostered. Take Ismail B. Ajjawi, a Palestinian who was supposed to start at Harvard this fall but had his visa arbitrarily canceled at the Boston airport because a Border Patrol agent didn't approve of his friends' social media posts. Or Ixcell Perez, a 14-year-old who was born in the U.S. but was initially denied re-entry from Mexico to seek treatment for leukemia at Duke Hospital in North Carolina. Her mother wasn't allowed to visit her until a newspaper reported on the situation last week.

Lest you think these stories are outliers or bureaucratic screw-ups, consider this: On Aug. 26, the administration eliminated a protection that allows immigrants to avoid deportation while they or their relatives seek life-saving medical treatment. This is a policy change that will, quite literally, kill people. On Aug. 29, the U.S. Citizenship and Immigration Services issued a separate policy change that will prevent the children of some naturalized citizens who are serving in the military or diplomatic corps and are born in U.S. facilities abroad from automatically becoming citizens — an escalation of Trump's campaign against birthright citizenship.

None of this, of course, will make Americans safer. That's not the point. The point is to position Trump as a strongman for his supporters to rally around. That was made clear in an Aug. 27 story in the Washington Post, in which officials involved with Trump's border wall said the president "directed aides to fast-track billions of dollars' worth of construction contracts, aggressively seize private land and disregard environmental rules" to build hundreds of miles of the wall before the election.

If they need to break the law to do it, Trump reportedly promised to pardon his subordinates, even though "Trump conceded last year in an immigration meeting with lawmakers that a wall or barrier is not the most effective mechanism to curb illegal immigration. ... Trump talked about the loud cheers the wall brought at rallies."

It's no big leap from cruelty toward, well, whatever you call Trump's reaction to a tropical storm nearing Puerto Rico, which is still recovering after thousands died following his administration's half-assed hurricane-recovery efforts in 2017: "Puerto Rico is one of the most corrupt places on earth. ... And by the way, I'm the best thing that's ever happened to Puerto Rico!"

There are 60 more weeks until the 2020 election. Deep breaths, everyone.