Is it transphobic to have a preference for or against penises? 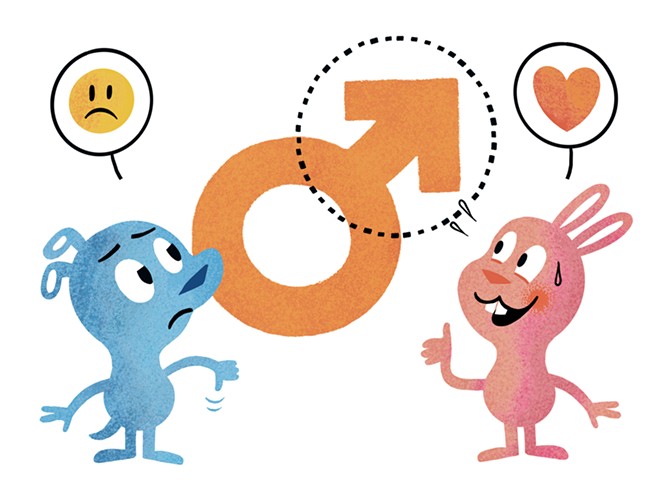 I’m a cis woman in her 30s who lives on the East Coast. I’ve been in an LTR with the same cis man for 12 years. No issues there at all! But we are considering opening up our relationship and I have a question about my sexuality. Basically, I’m attracted to people with penises. PIV is only sex that really arouses me — the only kind of sex I like to have or fantasize about — although I do enjoy everything that leads up to it. I’m that rare woman who comes easily during PIV and honestly prefer it over all things. So, although I am attracted to people regardless of what they look like, if I were to hook up with someone who didn’t have a penis, I would be disappointed.

I hooked up with two women during group sex and I liked their breasts and kissing them, but I quickly realized I do not find vaginas sexy at all.

So, what am I since not all people with penises are men? I ask because I don’t want to use a label on hook-up apps that’s transphobic in any way. I’m mostly attracted to people with penises, but I want non-binary people with dicks to slide into my DMs too. So, I am attracted to all men and non-binary people with penises (no matter how they present themselves). Is this messed up? I don’t know. I have searched for a term that describes this fixation on specific genitalia, but I have yet to find any. So, am I just straight? It seems some people think attraction and sexuality are separate from genitalia and anything else is transphobic, but for me, it’s the opposite. Dick or bust.

I’ve also never been on a dating app, so I am not sure if classifying myself as straight would still leave me visible to non-binary folx looking for women. Maybe that’s true, and finding a nuanced label doesn’t really matter.

You could make this complicated. You could describe yourself as an AFAB (assigned female at birth), cis-gender (not trans), femme-presenting (just what it sounds like) allosexual (opposite of asexual) phallophile (dick lover) in an ENM (ethically non-monogamous) LTR (long-term relationship) seeking masc-presenting and/or non-binary allosexual AMAB (assigned male at birth) phallus-havers-and-wanna-users for PIV. (And by the way, “phallophile” was the term you were searching for.)

Or you could keep it simple, LABELS, and just say you’re straight. Which is what you are. You’re a heterosexual woman — you’re a cis woman who’s attracted to members of the opposite sex — and while you require dick and dicking, you’re open to sex partners who don’t identify as men so long as they 1. have dicks and 2. want to use them. And who knows? In addition to getting dicked down by cis men and non-binary AMAB peeps, you might enjoy getting pegged down by cis women or AFAB non-binary peeps who 1. have a strap-on, 2. know how to use it, and 3. won’t ask you eat or touch their vaginas/front holes. All of the above could be included in your bio on whatever hook-up app you’re using.

Anyway, LABELS, there’s nothing transphobic or gynophobic about clearly and respectfully stating who and what you’re looking for. Use a positive framing (what you want), not a negative one (what you don’t). Indeed, letting people who don’t have penises know not to waste their time on you — cis women, non-binary AFAB peeps, trans men who didn’t opt for bottom surgery, trans women who did — is a courtesy, not an insult. You might hear from some people who aren’t what you’re looking for, LABELS, but you aren’t obligated to respond.

I had an “argument” with my wife recently. I’m a 48-year-old straight cis man. I’m also poly and kinky. My wife is a 42-year-old cis bi/pan woman. We’ve been married for 12 years. We are active in our local BDSM scene. Two weeks ago, a mutual friend approached me for a scene at a kink club. She’s a trans woman. She wanted me to flog her. It was a great scene and we both (I hope) enjoyed ourselves. Let me state that it was purely an impact scene and there was nothing sexual about the scene on my end, but I did provide some basic aftercare in the form of snuggling afterwards.

The day after the scene, this friend texted me, thanked me for the scene, and then asked me to dinner. I said I would need to check with my wife, assuming the invitation was for both of us. She then made it clear she was asking me out on a date. My problem is I am not attracted to her. The primary reason, to be honest, is because she is trans — or more specifically, because she has a penis. I think she’s a great person and I’m totally down to get to know her better as a friend, but there’s no attraction on my side. If she was post-op, I’d be more open to it, but knowing she has a penis is a dealbreaker for me. I declined politely, saying I would be open to hanging out as friends, but I wasn’t interested in dating. She asked if it was because she was trans and I told her the truth. She said she was disappointed, of course, but she understood and appreciated my honesty.

When I told my wife about this, she said I was transphobic because I’m not interested in our friend romantically or sexually. I was insulted. I’ve never held any prejudice against people who are transgender! A cousin who was trans committed suicide in the late 1990s and that really opened my eyes and I’ve had a girlfriend for more than a decade now whose daughter is trans and I love that girl. Maybe that sounds like, “I can’t be racist! I have Black friends!,” but these are facts! (And I’m black!)

My wife, however, thinks that it’s discriminatory and transphobic for me to reject our friend simply because she has a penis. She insists the presence of a penis should be a non-issue for me. I think this is unfair and, in all honesty, it’s really pissing me off. I like our mutual friend as a person, Dan, and I literally just played with her at a public event! I’m just not interested in dating her! Who’s in the wrong here?!?

—Extremely Not Into Dick

The full version of Savage Love is now exclusively available on Dan’s website Savage.Love! To continue reading this week’s column, go to savage.love/savagelove!