Is anyone really surprised Betsy DeVos' first year as education secretary was a total fail? 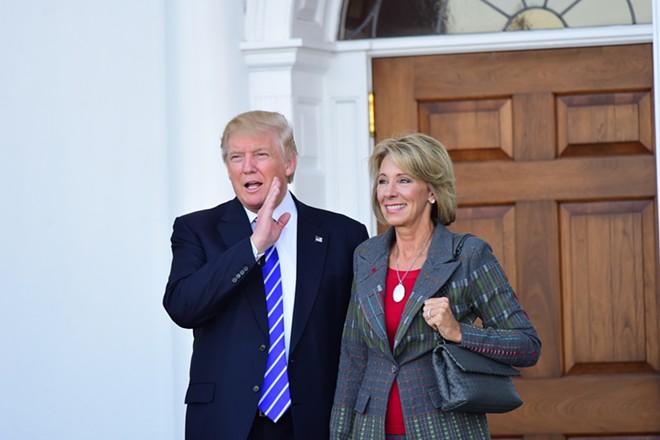 U.S. education secretary Betsy DeVos, a woman with zero qualifications to run the country's education department, recently completed her first year helming the office. Unsurprisingly, teachers around the country think she did a pretty shitty job.

The woman — or more likely someone on her very competent staff — did famously misspell the name of her own fucking department, after all.

According to a report in the Detroit Free Press, several teachers groups delivered report cards (very clever, you guys) to DeVos' place of work and they all gave her the F's she deserves.

Because while did she not only openly admit that she's not very familiar with mathematics, she also disgraced the name of Ms. Frizzle, and repeatedly tweeted really stupid tweets. Just when we start to feel sort of bad for this buffoon of a woman, we remember that her brother, Erik Prince, reportedly coordinated a meeting between Trump and the Kremlin before the 2017 inauguration.

Could Betsy DeVos be on her way out of the Trump administration?

And all that is just ancillary bullshit DeVos pulled during her first year. Her real work was overseeing the rolling back of federal education regulations and guidance on issues like sexual assault, bathroom use for transgender students, for-profit colleges, and college students who borrow for school expenses. She also managed to develop a crappy record for ensuring educational equity and providing funding for students of color and low-income students.

All the best moments from Betsy DeVos' senate hearing

Additionally, she offered voluntary buyouts to 207 employees, the majority of whom worked in the Office of Civil Rights.

Of course, DeVos is quite proud of all this work. She told Education Week, "Some of the most important work we've done in this first year has been around the area of overreach and rolling back the extended footprint of this department to a significant extent."