We all should stand with Iranians protesting against the regime for their dignity and freedom, but nothing could hurt their cause more than Western interference 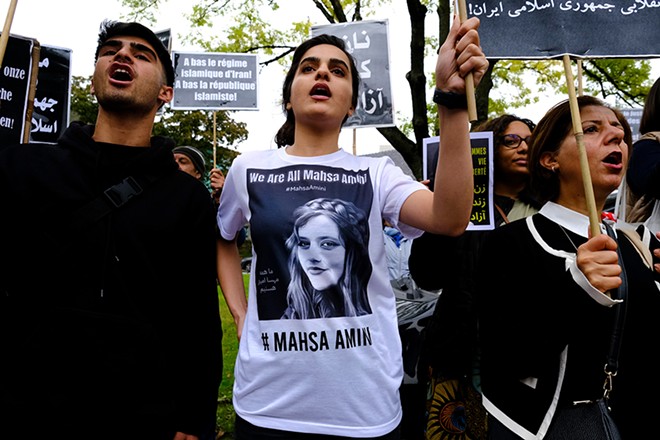 Shutterstock
Organic uprisings following the murder of Mahsa Amini in police custody threaten the regime. But foreign interference won’t help their movement — instead, it could throttle it.

The Iranian government is one of the world’s most repressive autocracies. It uses religion as a cudgel to repress freedom of speech, thought, dress, and opportunity. And one of its tricks is framing any dissent as an attack from anti-Muslim elements abroad, rather than the organic movements for freedom they truly represent.

On Sept. 16, Mahsa Amini, a 22-year-old woman, was murdered at the hands of the government’s morality police in Tehran for allegedly wearing her hijab — required in public by Iranian law — too loosely. The notion that a government should be able to dictate religious dress violates both the most nominal standards of human rights — and the very faith it claims to uphold. Indeed, the Quran itself precludes compulsion in matters of faith: it identifies the self-defeating contradiction at its heart. What is faith, after all, without the freedom to choose it?

But Tehran’s morality police were never really about faith. They are about control in the name of the state. Which is why Amini’s murder ignited the largest protests Iran has seen in years. Women are burning their hijabs in an act of defiance against the regime, supported by men who recognize that violating women in the name of faith is a tool of division — designed to keep them from uniting against a regime that has denied Iranians even the most basic rights. We all should stand with Iranians protesting against the regime for their dignity and freedom.

The crackdown has been fast and brutal. The regime has blacked out internet access to keep the world from seeing their fury, which has claimed 76 lives already. Iranians in exile have watched helplessly as their sisters and brothers are killed for standing against the regime. This has led many to call for international action from Western governments. But nothing could hurt their cause more than Western interference.

First, I understand the instinct in times like these to call upon Western governments to stand for their stated beliefs in freedom, democracy, and human rights abroad. When Egyptians rose up against the Mubarak regime in Egypt in 2011, I called for President Obama to raise his voice in solidarity with the protestors. As an Egyptian American, I wanted desperately for the Egyptian people to taste the same freedoms, the same right to self-determination that I had taken for granted as an American. Yet nearly 11 years on, I cannot say that Egypt is in a better place than it was. While Egyptians had a taste of democracy for a few short years, it was just that: a taste. Today, the U.S. all but openly backs an even more brutal form of military dictatorship than the one Egyptian people overthrew during the Arab Spring. U.S. taxpayers backstop the Sisi regime to the tune of $1.3 billion every year.

Not that it would have made a difference, but I wish I would have called for American nonengagement in the national affairs of the country — for the U.S. simply to stop tipping the scales in Egypt in one direction or another. Rather than ride in on a white horse during visible uprisings, the U.S. commitment to freedom, democracy, and human rights is most critical when the world is not watching. It means doing things like pulling military aid from countries like Saudi Arabia, Egypt, and Israel that routinely violate human rights and skirt international law.

Iran’s relationship to the West is even more fraught. Egypt’s relationship with the U.S. rests on their long history of clientelism. But the U.S. involvement in Iran has been far more hostile. From the CIA’s overthrow of Iran’s elected prime minister in 1953 to the U.S.’s unilateral pullout of the Iran nuclear deal and assassination of General Qassim Soleimani under Trump, our country has engaged in a pattern of frank sabotage and hostility.

Their regime leverages that history to wield the threat of Western force as a domestic tool of power. Understanding the implications of this requires us to be far more nuanced about the various factions in Iranian political life. There are, of course, those rising up against the regime’s tyranny. On the other side, there are those who benefit from, and therefore support, the regime. But there’s also the critical middle — those who understand the regime for the tyrannous autocracy that it is, but are rightly dubious of threats from abroad. Should the West intervene, the regime would immediately paint these organic uprisings as a tool of Western interference, placing the regime in this narrative as protectors of Iranian independence from that influence. Rather than tipping the scales toward those rising up for freedom and democracy in Iran, Western interference would undercut their legitimacy in the eyes of that critical middle.

Here, I probably don’t have to remind you of our country’s disastrous history of foreign intervention for “democracy” in Afghanistan and Iraq. While there’s a lot of space between weighing in on the side of the protestors and all-out war, tensions have a way of escalating quickly when regimes are existentially threatened. Iran’s autocrats understand that there would be no more effective a way to unify a divided public than through war. Better not to give them any pretext.

The irony, of course, is that the loudest American voices for U.S. intervention are the same ones calling for our government to violate women’s bodies, too. Take Sen. Lindsey Graham. One week, he was proposing a nationwide abortion ban. The next week, he’s taunting the Biden administration for doing too little on behalf of the women of Iran.

Mind you, this is the same Lindsey Graham who thinks that the best we can do are “thoughts and prayers” when people are killed by gun violence in America.

Perhaps rather than demanding action that could undermine the righteous protests of Iranians in Iran, our politicians could demonstrate how effective democracy is here at home by protecting the rights of American women rather than American guns here in America.

Originally published Sept. 28 in The Incision. Get more at abdulelsayed.substack.com.