Inherit the wind: Climate change, DTE, and 1 million without power

Photo courtesy Gregg Newsom
Photo taken this morning at Charlevoix and Seyburn.
DTE Energy called it the “largest weather event in its history.”

Making matters worse, when the destructive winds were at their height yesterday, DTE’s online power outage map crashed, and some speculated that cause was thousands of customers using the site to check their status.

Photo courtesy Steven Cherry
A fallen tree pulled down power lines at Gallagher and Carpenter yesterday, causing a fire.
With thousands of power lines downed, it could be a week or more before power is restored for many area residents. With a cold snap coming, that could mean burst water pipes, among other problems, including spoiled food. One shop down the road from our offices, Heights Food Center, is storing food from their neighbors across the street in Pleasant Ridge. The store’s Loni Barash tells us they’ve set aside space in their freezers and refrigerators for people who don’t want their food to go bad.

The power outages have given local lodging some brisk business. For many, the weather was already too cold to tough it out indoors, and they resorted to finding hotel rooms. One colleague tells us they got the last room at a motel that accepts dogs. We heard of another homeowner whose wife is on oxygen, and they had to decamp to a hotel as soon as they lost power.

Reader photo
Image from last night shows a downed tree at Ashland and Korte on the east side.
We heard reports of increased traffic accidents as traffic lights were out. We can guess why there are accidents: Some people we saw seem to have forgotten that an out-of-commission traffic light is to be treated like a stop sign. We saw one motorist barrel through a dark light who almost ran into us. It’s worth repeating: Treat out-of-order traffic lights as STOP SIGNS.

There was evidence all over the region this morning of the wind’s work, but we were especially concerned about any fires. High winds can make firefighting very difficult. Readers may recall the scores of fires that swept through Detroit seven years ago during a period when winds also gusted to 50 miles per hour. (Speaking of which, the Hartford Home Fire Index just named Detroit the U.S. big city with the highest home fire risk! Yikes!)

Photo by Michael Jackman
Scorched fields where a grass fire raged yesterday, north of Forest between St. Aubin and Dubois.
So when we saw a fire last night we saw at Forest and St. Aubin in Detroit, we wanted a closer look. We didn’t see the thick black smoke pouring from one source, and didn’t smell the burning plastic we usually associate with a house fire. It smelled sort of like a guttering campfire. Sure enough, it turned out to be a field on fire, with wind feeding the fire and blowing it toward Dubois.

See more photos of the damage done by the wind storm

That also concerned us, because we remembered it was so near Recovery Park, the effort to use city land to grow food and train people with barriers to employment. We dropped by this morning and saw that the farming effort was spared any fire damage. However, fabric used to protect the grass seeding appeared to have blown off the mounds of earth created as part of their water retention project.

Photo by Michael Jackman
Luckily, Recovery Park's plastic greenhouses could stand the wind.
Luckily, however, their plastic greenhouses stood up to those strong winds, which is fortunate indeed. Not all outposts of urban agriculture were so lucky. This morning, we heard of damage to Tilian, HandSown Farm, Green Things, Flint Ingredient Co. & the WIA farm in Flint.

Normally, a strong storm is considered news only insofar as it was an “act of god” that couldn’t be helped. Perhaps the exception is when one of those holy rollers claims a storm is God’s way of punishing sinners. (Ever notice how those god bullies never utter a peep when a twister rampages through a trailer court of 100 percent God-fearing Americans?) 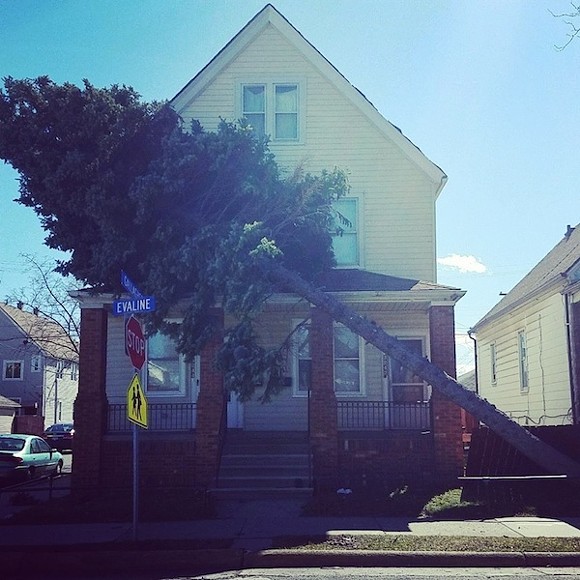 Photo courtesy August Gistchlag
Toppled tree at Evaline and Gallagher, Hamtramck.
But that’s starting to change, thanks to widespread acceptance of climate change theory and the internet. Yesterday, on social networking, we saw several people eager to ascribe the windstorm to the “climate chaos” effect of global warming.

And the politics of high winds doesn’t stop there: We even saw a few people taking shots at DTE for never taking the trouble to bury power lines so those profits stay sky-high. (Maybe a fair point there, or half of one.)

Photo by Michael Jackman
Wind caused gutter damage to this Hamtramck home, as well as taking out a few sections of fence.
When the news came in that Detroit’s emergency operators were asking citizens not to dial 911 to report high wind, though, perhaps that provided just enough of a break in the tension to be the opening for a joke, which came from Aaron Foley, editor of BLAC Magazine: Who was going to start a petition to turn the wind down? We suggested starting “The Wind Is Too Damn Strong Party,” and one wag said he was planning to picket the wind but his sign blew away.

But one of the most startling things about yesterday’s wind was the way it turned Hamtramck into a “trashnado.” Driving through the alley last night, we saw a whirlwind of rubbish where two strong crosswinds met behind a building, creating a miniature cyclone of chip bags, scraps of paper, plastic soda lids, polystyrene cups. Moments like that can be a wake-up call. There’s just too much trash in Hamtramck.

By way of confirmation, a pal sent us a video of a trashnado on Joseph Campau yesterday afternoon. It's enough to make us want to start our own "There's Too Much Damn Trash" party.

Humor is all in the timing: This morning we got a press release from Navigant Consulting with the subject heading, "Wind industry could drive a quarter million American jobs by 2020." Well, given yesterday's big blow, you could argue we have a great place for a growth industry right now. 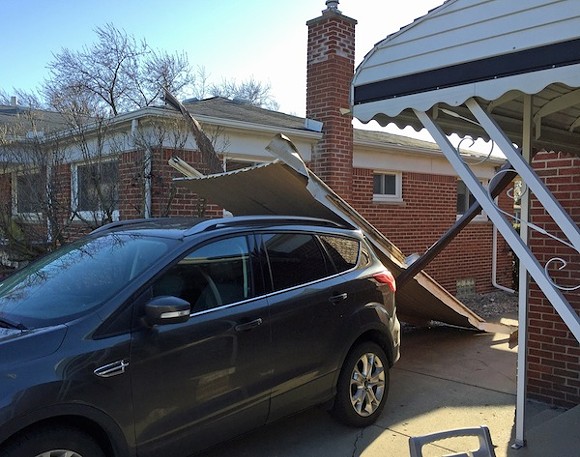 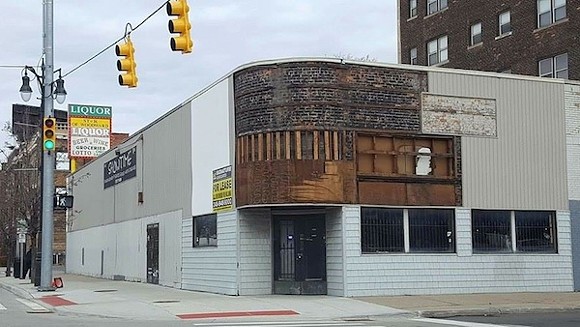 Photo by Gregg Newsom
Taken this morning at Cadillac Boulevard between Kercheval and Charlevoix.
click to enlarge

Photo courtesy Bill Schwab
This tree in Dearborn was toppled by winds, doing limited damage to this home.