In metro Detroit, suburbs have higher carbon emissions than the city, according to climate impact map

Suburban residents are more likely to have longer commutes, bigger energy bills, and spend more on items that harm the environment 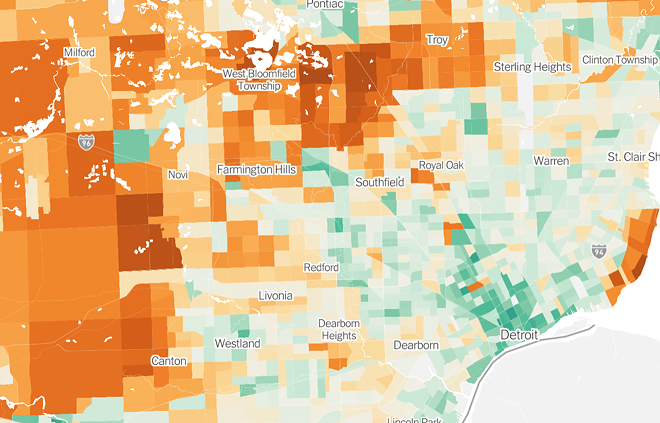 The New York Times/screenshot
Green represents emissions lower than the national average while orange areas have higher than average levels.

Carbon emissions for Detroit households are below the national average, according to a climate impact map released by The New York Times.

We can’t say the same for metro Detroit suburbs, however.

On the map, which uses data collected from CoolClimate Network, Detroit is surrounded by a sea of orange with areas like Royal Oak, Grosse Pointe Farms, and Troy showing higher-than-average emission rates.

“Households in denser neighborhoods close to city centers tend to be responsible for fewer planet-warming greenhouse gases, on average, than households in the rest of the country,” The New York Times reports.

That’s because residents in cities with higher population density (like Detroit) are more likely to live in smaller homes or apartments, which require less energy to heat and cool. According to the report, people who live in the city typically drive less since their jobs and stores are more likely to be nearby and easier to reach by bike, public transit, or on foot.

We’re not sure how accurate of a description that is for Detroiters living outside of walkable areas like Midtown, but the percentage still appears to be lower than suburban households.

As you move further away from city centers, the average emissions per household tend to increase as commutes get longer, houses are bigger, and people make more money, leading to higher spending on appliances, electronics, and travel.

This isn’t unique to Detroit, either.

The New York Times mapped out greenhouse gas emissions in cities across the country, and most metropolitan areas including Cleveland, New York, and Chicago show a similar phenomenon.

The further away from the city center you get, the higher the level of greenhouse gas emissions. In Michigan, areas like Flint and Grand Rapids also have lower-than-average emissions, with higher rates in surrounding suburbs.

It doesn’t help that Detroit, like many other cities, has experienced an exodus for decades, losing nearly 75,000 residents between 2010 and 2020 on top of being one of the worst cities for affordable housing.