“This is about people’s housing and pensions, about people’s marriages not disappearing overnight,” Upton, who voted in favor of the Respect for Marriage Act, told the Advance just before heading to President Joe Biden’s signing ceremony for the marriage equality bill on Tuesday afternoon.

The longest-serving member of Michigan’s congressional delegation — who is spending the final days of his 36 years in Congress situated inside Dingell’s office because Rep. Mike Turner (R-Ohio) moved into Upton’s former space — has plenty of criticism for the Republican colleagues he has been increasingly at odds with as the party delves into political violence and conspiracy theories and remains mired in former President Donald Trump’s lie that he won the 2020 election.

A Republican whose brand has long been one of centrism and bipartisanship — he calls Democratic colleagues like Dingell and U.S. Rep. Elissa Slotkin (D-Lansing) “good friends” and at several points during the interview and emphasized he’s a member of the Problem Solvers Caucus, a group of House members who aim to foster bipartisan cooperation among lawmakers – Upton said he leaves office in a political environment more toxic than any other point during his decades in Congress.

The legislator, whose 6th District includes a large swath of Southwest Michigan, announced in April he would retire instead of running for reelection in a newly drawn district that would pit him in a primary against U.S. Rep. Bill Huizenga (R-Zeeland). Huizenga, a vocal supporter of Trump, defeated Democrat Joseph Alfonso in November’s election and will represent the newly drawn 4th Congressional District. 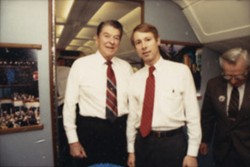 It’s not solely the marriage equality bill upon which Upton has disagreed with the majority of his Republican colleagues. The 69-year-old lawmaker, who first took office during the Ronald Reagan administration, faced intense backlash from members of his party after voting to impeach Trump for inciting the Jan. 6, 2021, insurrection in the U.S. Capitol in an attempt to overturn the 2020 election that the former Republican president lost.

“Jan. 6 was real, despite what some have said, and it was scary,” said Upton, who watched the rioters attack the Capitol on television because he had sequestered himself in his office that day due to concerns over COVID-19. “I’m convinced that by only a couple minutes we saved a massacre from happening on the floor of the House.”

While Republican lawmakers were witness to this fatal attack and the House committee investigating Jan. 6, 2021, has thoroughly documented the armed rioters attempting to overthrow a democratically elected government, as well as and Trump’s leading role, Upton acknowledged there remain members of his party who will not abandon the lie that Trump won the election.

“We still have a lot of deniers,” Upton said. “A lot of them are scared of the [GOP] primary. They have a base they don’t want to upset.”

“Jan. 6 was real, despite what some have said, and it was scary. I’m convinced that by only a couple minutes we saved a massacre from happening on the floor of the House.”

An Advance analysis found that despite a wave of “pro-democracy” candidates winning the Nov. 8 election, half of incoming GOP state lawmakers are election deniers.

This allegiance to Trump’s election lies after an attempted coup comes despite the state Bureau of Elections’ report on 250 post-2020 election audits in Michigan found “no examples of fraud or intentional misconduct by election officials” and a GOP-led state Senate Oversight Committee report in June 2021 that cited “no evidence of widespread or systemic fraud” in the 2020 election, among numerous other election audits nationwide that found the same.

“The top of our ticket in Michigan was three adamant [election] deniers,” Upton said of GOP gubernatorial candidate Tudor Dixon, attorney general candidate Matt DePerno and secretary of state candidate Kristina Karamo. “We lost the state House and Senate for the first time in 40 years. We got wiped clean at the top of the ticket. We have the lowest number of Republican members of Congress from Michigan ever — six. I think there’s a message there.

“You can win a state convention, but you can’t win November’s general election if you just appeal to your base,” Upton continued. “Republicans have to appeal to independents. They have to talk about energy prices; they’ve got to talk about the environment. Climate change is real.”

Upton has long remained in the minority of Republicans when it comes to fighting Trump’s lie about the 2020 election — and his impeachment vote and commitment to telling the truth about the election has resulted in Trump repeatedly attacking Upton on social media.

When the Michigan legislator announced he was retiring, the former president gleefully said in a statement, “UPTON QUITS! 4 down and 6 to go. Others losing badly, who’s next?” Trump’s statement was a reference to the Republicans who voted for the former president’s impeachment. Of the 10 House Republicans who voted to impeach Trump, only two will return to Congress in January: Reps. David Valadao of California and Dan Newhouse of Washington.

In addition to earning Trump’s ire, Upton faced violent rhetoric from members of his party following his impeachment vote.

Michigan Republican Party Chair Ron Weiser, for example, casually referenced assassinating Upton and Rep. Peter Meijer (R-Grand Rapids), who also voted to impeach Trump. During a North Oakland Republican Club meeting in March 2021, an audience member asked Weiser what should be “done” about Upton and Meijer after the impeachment vote.

“Ma’am, other than assassination, I have no other way … other than voting [them] out,” Weiser said.

Meijer lost his August GOP primary to election denier John Gibbs, who went on to be defeated in the general election by Democrat Hillary Scholten.

Death threats also followed Upton backing the bipartisan Infrastructure Investment and Jobs Act, a $1.2 trillion piece of legislation that Biden signed into law in November 2021 and sent billions of dollars to Michigan to repair roads, expand internet access, invest in ports, clean up the Great Lakes, and replace aging lead pipes that tainted water in communities like Benton Harbor, which Upton represents.

Immediately after the infrastructure vote, far-right U.S. Rep. Marjorie Taylor Greene (R-Ga.), called Upton and the other 12 Republican House members who voted for the bill “traitors” in a tweet. In another tweet, Greene posted the phone numbers of those 13 Republicans.

After that, a flood of phone calls rushed into Upton’s office — more than 1,000 in a matter of days, the Michigan congressman said in a weekly email he has sent to constituents throughout much of his tenure.

In one voicemail left for Upton following the vote, an individual said, “I hope you die. I hope everybody in your f–king family dies.”

“It’s a difficult world,” Upton said Tuesday. “I’m still subject to death threats – me and my family. I lost a staff member because of the severity of the messages.”

The congressman said “most of the threats I had, and they were pretty nasty, were from folks out of state — Pennsylvania, South Carolina.”

In the wake of soaring political violence, Upton has had to change the way he thinks about safety for himself and his family.

“I’ve got cameras on my house,” he said. “I don’t release my public schedule.”

“The top of our ticket in Michigan was three adamant (election) deniers. We lost the state House and Senate for the first time in 40 years. We got wiped clean at the top of the ticket. We have the lowest number of Republican members of Congress from Michigan ever – six. I think there’s a message there.”

Political violence has surged in the wake of the Trump presidency and the 2020 election. In the five years after Trump was elected in 2016, the number of recorded threats against members of Congress soared more than tenfold to 9,625 in 2021, the New York Times reported.

Across the state and country, public officials, from congressional members to school board representatives and public health leaders, are facing increasing public hostility that academics previously told the Advance is rooted in the often aggressive and violent rhetoric that emanated from Trump and his former administration and has now bled into Republican politics at the state and local levels.

A February 2021 study from the American Enterprise Institute (AEI), a right-leaning Washington, D.C.-based think tank, found that a majority, 56%, of Republicans “support the use of force as a way to arrest the decline of the traditional American way of life.” Meanwhile, 35% of independents and 22% of Democrats said the use of force is necessary to “stop the disappearance of traditional American values and way of life,” AEI wrote.

Upton pointed to comments Greene made over the weekend as an example of politically violent rhetoric.

During a Saturday night dinner hosted by the New York Young Republicans Club, Greene said that had she and former Trump aide Stephen Bannon organized the Jan. 6, 2021 attack, they would have been armed and “successful.”

“Sadly, we have folks who really do believe that,” Upton said.

Instead of focusing on attacking Democrats, Upton said he hopes Republicans begin to mirror one of his political idols, Reagan, and foster a world of bipartisanship.

“He got things done and worked with a Democratic Congress,” Upton said of Reagan. “He won 49 states when he ran for reelection — he won all states but [Democratic candidate Walter] Mondale’s Minnesota.”

Dingell said Upton has a similar quality and has been able to connect with lawmakers and constituents from a variety of political backgrounds.

“Fred is one of my best friends, and I will miss him in Congress very much,” Dingell told the Advance. “He knew that serving the American people requires coming together and listening to all perspectives. Because of that, he was able to get so much done in Congress, and I am especially proud of all that we accomplished together. He is one of the greatest Michiganders to serve our country, and his retirement is a great loss for our state.” 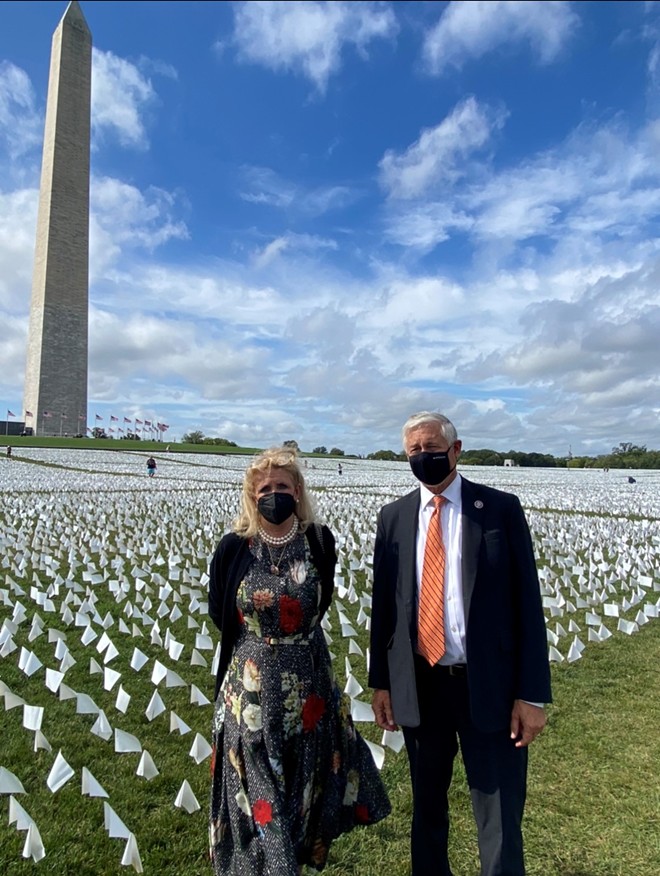 One Republican leader Upton does not see appealing to a wide variety of people is Trump. While the former president has announced his bid for the 2024 presidential election, Upton said he no longer appeals to independent voters.

“He’s a very viable candidate and his core base is as committed as ever,” Upton said of Trump. “He’s not going away, but he’s lost his support among independent voters for sure. They’ve had it. They wish he dropped his cell phone and tweets in a bucket of water in year one.”

According to a Quinnipiac University poll published Wednesday, Trump’s approval ratings are at the lowest they’ve been in seven years. Republicans continue to largely back Trump, with 70% of GOP voters having a favorable opinion of him, the poll reported. That number is far lower among independent voters, 25% of whom reported having a favorable opinion of the former president.

Now, Republicans need to focus on issues like “making sure families can afford to send their sons and daughters to higher education,” Upton said.

“We can’t just say no,” he said “We have to be part of the solution; that’s where the Republican party has to be. We’re going to have to appeal to suburban voters – soccer moms as they say.”

As for Upton, he’ll be watching the lead-up to the 2024 election “from the sidelines.”

“I’m prohibited from lobbying, but I’ll be involved with the Problem Solvers Caucus and other bipartisan groups trying to make a better quality of life for all Americans,” he said.