How will the Flint crisis end for Snyder? 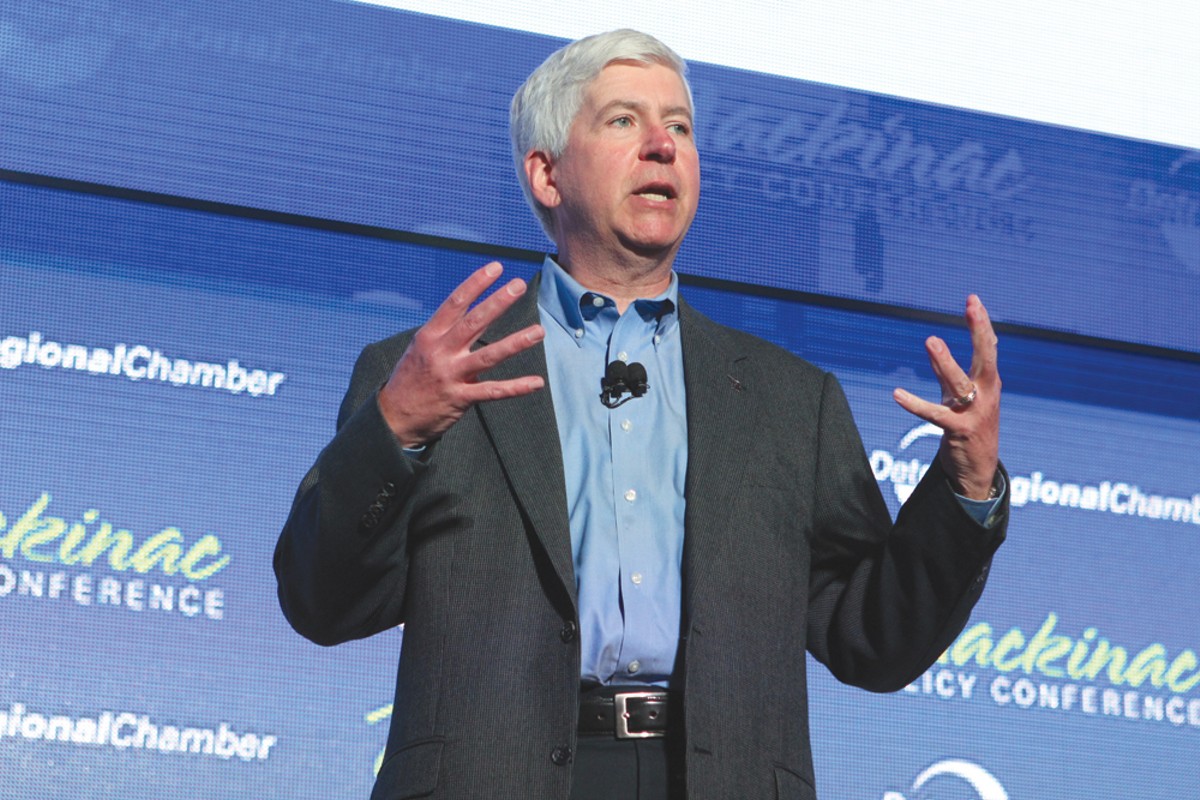 Michigan Gov. Rick Snyder, it seemed to many, recently gloated over surviving the Flint water crisis.

“The reports of my demise are overblown,” he told the audience June 1 at the Mackinac Policy Conference, before calling “negative” members of the press a bunch of “Eeyores.”

He’s partly right. In April, the Michigan attorney general’s office announced the initial charges resulting from its investigation of the incompetence, cover-ups, deceit, and seemingly criminal stupidity that resulted in the Flint water crisis.

Snyder wasn't among the first to be rounded up.

Still, it's widely agreed that he is the villain, and the basic order of events is clear: Michigan, led by an unelected, Snyder-appointed emergency financial manager, took over Flint. The state switched the city's drinking water source for still unclear reasons. That decision poisoned children, ruined lives, and the suffering will likely linger for lifetimes. Although there's government failure at all levels, as Snyder likes to stress in his spread-the-blame PR effort, his austerity campaign and governing philosophy are at the issue's root.

While the governor has not been charged, the state, the Justice Department, and FBI are continuing to investigate. Beyond that, several recall efforts are underway; the calls for resignation persist; at least 15 lawsuits were filed, including seven class-action suits; and Congress conducted its own investigation.

So why wasn't Snyder charged, and how could he still be brought to justice?

'Why isn't there a law against this?'

Successfully pursuing criminal charges would be challenging because the Flint situation is so inconceivable, there aren't any federal environmental laws that directly address it, says Peter Henning, a professor at Wayne State University Law School and former federal prosecutor.

What's needed for a conviction is an email or other clear evidence that could be considered a "smoking gun" proving Snyder knew of the issue, chose not to act, or orchestrated a cover-up.

"This is a unique situation. You just don't see this kind of thing," Henning tells MT. "It's one of those cases where you say, 'Why isn't there a law against this?' Well, no one ever thought we would need a law, because why would anyone do anything this stupid?"

One low-level official was charged with a misdemeanor under the state's Safe Drinking Water Act, but that only comes into play if one's decisions directly impacted the water, and senior officials and Snyder are too far removed from those day-to-day decisions, Henning says.

With few criminal options under the state or federal Safe Drinking Water Act, the Justice Department could look at whether "willful misstatements" were made by Snyder or state officials to deceive the Environmental Protection Agency — something Henning wrote is the "old Watergate approach to punishing the cover-up" — though prosecution must prove officials lied and didn't simply omit part of a statement.

But the clearer path to a criminal conviction may lie in the state's broad "misconduct in office" law that allows for the prosecution of public officials for the type of malfeasance on display in Flint. Those are among the felony charges brought against Michigan Department of Environmental Quality officials in April. Again, however, that requires prosecution to demonstrate officials' misconduct in Flint was intentional, Henning says, and that may be difficult, especially with so many fingers pointing up and down.

Although the state says there are more charges on the way, and at least one official is cooperating with investigators, there still isn't the hard evidence a conviction requires.

Though it's certainly not impossible, a conviction is more challenging than it appears. "From the journalistic view, 'Oh, he knew about this and didn't act' is different than 'Did he have the requisite knowledge to commit a crime?' It's hard to make out," Henning says. "People have the idea of 'charge him with a crime and convict him,' but it's not that easy.

The role of Congress

If there was evidence Snyder knew of the danger and acted criminally in his handling of the situation, the U.S. House Committee on Oversight and Government Reform hearings are a venue in which it could have surfaced.

The committee can persuade Congress to enact or change laws, and suggest remedies, like a fund similar to the one created for the victims of the BP Deepwater Horizon oil spill.

But Rep. Elijah Cummings, the committee's ranking Democrat from Maryland, says Snyder withheld documents and emails from the committee, and he questions how truthful Snyder was in his testimony at the March hearings.

"Now he has reversed his sworn testimony before the committee and admitted that he did in fact delete some of his emails, and we may never know what they said," Cummings wrote in a statement on his website after the hearings. "Although he claims he was aware of problems with Flint's water, he repeatedly claims that he can't recall basic information from that period, and he continues to withhold documents and witnesses from Congress."

Snyder spokeswoman Anna Heaton called Cummings' allegations a "misunderstanding." The representative wasn't aware that Snyder wasn't required to keep emails from beyond last November, she said, and any emails Snyder deleted "would have been done in the normal course of business."

Though it appears unlikely the Republican-led committee will push for any new legislation, the hearings fixed a light on the situation.

"If the state wants all the power, then the state should accept the consequences when they fail to do what they're supposed to do," Cummings says. "We can put on trial this idea, this theory, that when you shrink government and concentrate on austerity, as opposed to providing appropriate services to the public, and when you concentrate on taking power away from duly elected local officials, and when you fail to address infrastructure problems, this is what it leads to."

A forced resignation or recall

Several recall campaigns appeared to be in the works, and the state even approved recall ballot language back in February. But the window to harness the anger and push that effort forward appears to have shut.

Metro Times columnist Jack Lessenberry, who is Michigan Public Radio's senior political analyst and a 40-year veteran of state politics, says any shot at success on that front hinged on someone with deep pockets, like Michael Moore, bankrolling and organizing the campaign.

That never happened, and a successful recall is now impossible, he says.

A forced resignation is also doubtful partly because Michigan is gerrymandered and controlled by a large Republican majority, but there also really isn't much in the way of drive from either party to dislodge Snyder, Lessenberry says. Republicans don't want to see Lt. Gov. Calley in charge, and Snyder remaining in office has its benefits for Dems, Lessenberry says. "Politically, Snyder is far more useful to the Democrats if he's out there twisting in the wind for as long as possible."

Snyder spokeswoman Heaton said the state has approved $234 million in the last nine months to address issues in Flint.

"He hasn't resigned because he's committed to fixing problem, and walking away wouldn't do anything to fix it," Heaton said.

At least 15 private lawsuits were filed in state, local, and federal court. Some seek monetary damages. Some seek to hold Snyder and other state officials personally responsible. Other complaints ask the courts to order the city to replace the pipes, test the water, and monitor residents' long-term health. Already there's discussion of a fund similar to that created by BP to pay the victims of the Deepwater Horizon spill.

John Fiske, a managing attorney at the California EcoLawyers Practice at Gomez Trial Attorneys, is not involved with the cases, but reviewed some of the complaints.

He says they allege the state contaminating the drinking water violates plaintiffs' life, liberty, or property without due process of law. In other words, the plaintiffs were injured under the authority of the government providing safe drinking water. The suits also claim inverse condemnation, which essentially states that one can be compensated if one suffers a property loss due to government action.

Fiske calls the approaches "very interesting and creative" routes around sovereign immunity, which shields the government from such lawsuits. And that could force the state to settle.

"If I were the state of Michigan, I would step up and take responsibility, and if that means paying monetary damages, medical monitoring, reimbursing water bills, whatever is to make it right, do it," Fiske says. "Fighting it could make it worse for the people and worse for the state."

With all the possibilities, it's hard to imagine some degree of justice isn't served, though the outcomes hinge on what's uncovered in the ongoing investigation. As of now, Lessenberry says it doesn't look like the crisis will knock Snyder from office.

"This looks more like the Iran-Contra scandal than Watergate. In that one, Reagan survived. It was more a case of a president who didn't keep an eye on the store," he says, adding that Reagan fired Oliver North and John Poindexter over the Iran-Contra affair. Snyder did nothing upon learning of the scope of the Flint problem in October.

It's mid-to-high-level DEQ bureaucrats who will be continue to be pilloried and have their careers destroyed rather than Snyder going to jail, Lessenberry says.

"A couple more mid-level, anonymous bureaucrats might be hauled for low-level felonies, maybe serve a little time, and they'll call it a victory, but it's a show trial so they can say they tried somebody," he says.

So are the reports of Snyder's demise overblown?

While he isn't now facing what many consider justice — jail — one unpleasant alternative remains. Lessenberry sees Snyder serving out his term before slinking back to the private sector after 2018. He can probably forget about the VP talk or any sort of Cabinet nomination should a Republican win the presidential election, and he will never clean himself of this stench.

"It's quite conceivable that, were a Republican elected, he would've been appointed to some kind of Cabinet position, but nobody will appoint him to anything for the rest of his life," Lessenberry says.

"He is the man who poisoned Flint, and he will vanish. He is irredeemable and tainted for all of time."