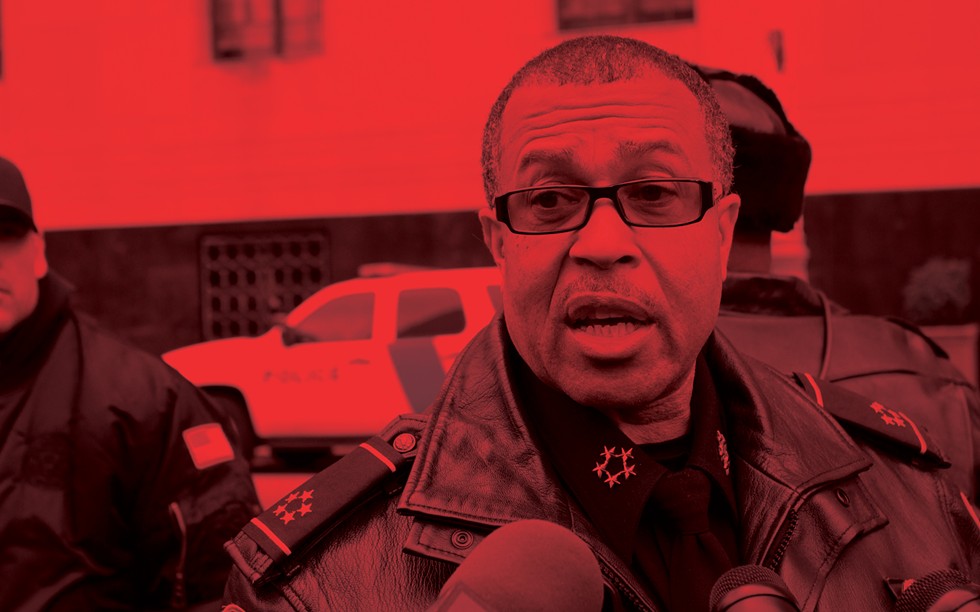 Steve Neavling
During his tenure as Detroit’s police chief, James Craig regularly convinced residents of success where statistics suggested failure, including on crime.

For many minority Angelenos, the incident came as less of a surprise: Frustrated community leaders detailed how the beating represented the culmination of the vicious and terrifying 13-year reign of white Los Angeles Police Chief Daryl Gates, who downplayed it as an aberration.

But the controversy didn’t just highlight the LAPD’s strained relationship with minority communities — it also exposed racial tension simmering within the department. Minority officers alleged they faced frequent death threats from white coworkers who sent their messages with a noose, Ku Klux Klan calling card, and chalk body outline. They endured racial slurs like “monkey” or “burrito man,” and were routinely denied promotions by an almost exclusively white command staff — a claim supported by a state investigation.

For a moment, it seemed that King could jolt the department into confronting its internal friction. However, charges of systemic racism were downplayed by several Black officers, including one who held a key position and the media’s attention: Sgt. James E. Craig, Jr.

“I believe that there are individuals who have racist attitudes, but racism is not widespread throughout the department,” Craig told reporters weeks after the beating. As president of the Oscar Joel Bryant Foundation, which represented 500 Black officers, his comments carried weight.

“The opportunity for a Black to be promoted in this department is as good as it can be,” he said. “We believe that during the last 13 years, the chief has provided strong leadership.”

The controversial statement prompted many Oscar Joel Bryant members to quit the foundation, and a subsequent series of discrimination suits filed against the department and its union branded the LAPD “a bastion of white supremacy.” But backing the controversial chief with comments printed in newspapers across the country appeared to pay dividends for Craig’s career: He quickly rose through the ranks, and within a decade became one of few Black LAPD officers to make captain.

Had he spoken out about racial discrimination like others, then “it probably would have been a lot more difficult to get promoted,” said Jody Stiger, the current head of the Oscar Joel Bryant Foundation. “He’s definitely a politician. He was a politician here, and it’s expanded since he’s been in Detroit.”

A PR master is born

Craig’s handling of the tense 1991 moment marked the debut of a public-relations master who, in one deft stroke, could protect a struggling department’s image and advance his own career.

Over the next 30 years, his finely tuned media instincts and propensity for cultivating grassroots support in minority communities shielded him from controversies that would have felled less politically gifted chiefs — like Gates in L.A., who was forced out after King — and eventually positioned him as a Republican gubernatorial front-runner in Michigan, a state of 10 million people.

During his tenure as Detroit’s police chief, Craig regularly convinced residents of success where statistics suggested failure, including on his main charge: crime.

Detroit remains the nation’s most violent big city, per the FBI, just as it was when Craig arrived in 2013. He leaves his post amid a crushing surge of violence in which multi-casualty shootings make headlines almost weekly. Quality-of-life issues persist, like an unchecked drag-racing problem that has taken lives and hurt livelihoods.

“In the end the citizens didn’t benefit, but it goes to show, ultimately, people don’t care about stats,” said Ricardo Moore, a former Detroit police lieutenant who served on the department’s oversight board from 2013-2017. “If they see you on TV, you’re credible. And now he’s a contender to be governor and it’s like, are we into substance or are we into style? And I think we’re into style.”

Former police officers and observers in Detroit, Cincinnati, and L.A., the three cities where Craig has spent most of his career, say his intensive community outreach operations were partly driven by political ambition. Though these operations yielded mixed results on crime, the media still mostly lionized him with years of favorable profiles and coverage.

By the time he retired, Craig was doing much more than just dictating the narratives around the DPD — he was directing an elaborate and effective PR production centered on his newly developed culture warrior persona, transforming him into a conservative media darling.

Craig declined to be interviewed for this story, but he’s repeatedly explained the rationale for his vigorous PR campaigning: “You must control the message,” he told the Free Press in 2017. “And one thing that we’ve done very well is, we do tell our story. If we don’t tell the story, someone else will tell the story for you.”

By the time he retired as chief in June, Craig was doing much more than just dictating the narratives around the DPD — he was directing an elaborate and effective PR production centered on his newly developed culture warrior persona, transforming him into a conservative media darling.

His post-George Floyd defense of the nation’s cops and right-wing ideology on Fox News showcased his visceral political appeal, and just as his 1991 post-King defense of the LAPD boosted his value to superiors, he drew the attention of former President Donald Trump and other prominent GOP figures.

But with Craig’s record on crime reduction mixed, the question is: On what achievements is the former chief running? For some supporters, statistics don’t tell Craig’s whole story.

“I can’t say if Chief increased or decreased crime, but he never shied away from doing things to address it,” said Detroit police officer Baron Coleman. “The man cared.”

A product of Detroit’s working class, Craig was born in 1956 to a military police-turned Detroit reserve officer and a mother who earned two degrees, one in education, from Wayne State University. The couple raised Craig and his four younger siblings in an 800-square-foot brick bungalow on the city’s west side.

Craig began his 44-year career in law enforcement shortly after graduating from Cass Technical High School with a focus in automotive services, the beneficiary of an affirmative-action program intended to integrate the Detroit Police Department. It was an opportunity that had eluded his father, Craig Sr., who was tasked with responding to the 1967 riots in an auxiliary capacity, but not permitted to join full-time what was then an approximately 95 percent white force. The younger Craig said he experienced racial bias early on the job, when his partner, a white department veteran, told him not to touch anything and “just sit there and be Black.” He stuck it out on the advice of his father, who encouraged him to change the profession from the inside.

Though he’s guarded additional details of his personal life, Craig has been married four times to three different women and has an adult daughter and son, hip-hop artist OVO James Craig, but sources say he’s close with only his daughter. Court records show he filed for personal bankruptcy twice, while a ranking officer in Los Angeles in the 1990s. He now appears to live within the means of what was a $225,000 salary in Detroit, in a McMansion valued at $900,000 and safely tucked in one of the city’s few gated communities.

Before returning home as chief in 2013, Craig held the reins at departments in Portland, Maine, and Cincinnati, but largely cut his teeth in Los Angeles in the 1980s and ’90s, absorbing management strategies that critics and supporters alike say he imported to Detroit, for better or worse.

Described by community leaders at the time as a “paramilitary force” that preyed on minorities, the LAPD disproportionately killed Black people and, during the two-year-long “Operation Hammer,” carried out mass sweeps that rounded up tens of thousands of largely minority men who frequently weren’t convicted of crimes. In an infamous episode several years before King, 80 LAPD cops swarmed a Dalton Avenue apartment building looking for drugs. Officers tore apart civilians' homes, smashing furniture, toilets, appliances, and mirrors, and spray-painting “LAPD rules” on the walls. Elderly Black residents reported that they were assaulted by officers, and the raid left 22 innocent people homeless, netting only a small amount of drugs.

Among those who promoted Craig at the LAPD and served as his mentor was Bill Bratton, a former New York City and Los Angeles chief reviled by many in minority communities in both cities. He crafted policies that largely targeted people of color, though some also viewed him as a reformer.

But post-King, the LAPD sought to repair relationships with minority communities, and officers who served with Craig say he was among its ambassadors. City council and the media recognized his efforts, which included partnerships with community-based gang-intervention groups that officials said reduced violence.

“He was very community-oriented [and] would think outside the box,” said Fred Starkey, a retired officer who served under Craig in Los Angeles.

By 2011, Craig took over in Cincinnati, where he was popular with the public but stirred up more racial controversy. By the end of his two-year stint, the Sentinel Police Officers Association, which represented Black officers, issued a vote of no confidence, alleging that the department’s disciplinary apparatus went easier on white cops, and the number of Black and women officers in the command staff dropped.

Moreover, Craig was too focused on “being loved by the citizens,” the Sentinel wrote in 2013. His community outreach efforts seemed at least partially politically motivated and yielded mixed results on crime, the Sentinel’s then-president, Phill Black, said earlier this year. At the time, Craig privately mulled a run for mayor of Cincinnati, and was so beloved by the business community that it pulled together a pot of money to convince him to stay when he was offered the chief’s job in Detroit.

“When statistics show that those changes you made haven't affected the criminal side, then people need to look at why you made all those changes and you got community support, but the crime hasn’t changed,” Black said.