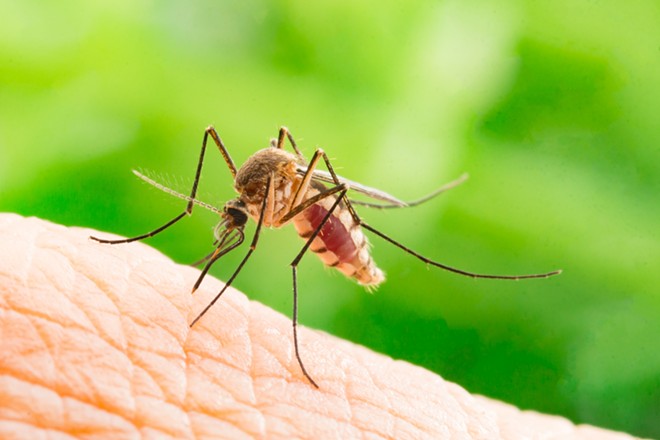 
Health officials are asking residents to be especially vigilant about protection from mosquito bites after seven cases of Eastern Equine Encephalitis have been confirmed in Michigan. EEE is a disease carried by some types of mosquitoes, and it can infect both humans and animals.


For those that do get a neurological infection from EEE, the fatality rate is about 30 percent. Three of the seven cases recently reported in Michigan were fatal. Of the 70 percent who survive neurological infection, EEE often results in personality disorders, seizures, and various other kinds of brain dysfunction. The disease is most dangerous to young children and individuals over age 60.


ClickOnDetroit reported that in Barry, Cass, Genesee, Kalamazoo, and Van Buren counties, five deer were found to be infected with EEE and euthanized. While no cases of EEE have been reported in Oakland County, one blood donor in the county was found to be positive for West Nile Virus, another mosquito-borne illness. As a precautionary measure, West Bloomfield High School is spraying its sports fields today with a mosquito repellant. The most recent human death from EEE in Michigan occurred in Kalamazoo County when Gregg McChesney, 64, passed away on Aug. 19.


Michigan isn’t the only state that has seen a rise in EEE cases. The Washington Post reported that in 2019, Massachusetts, Rhode Island, New Jersey, Connecticut, and North Carolina have also reported human infections. Overall, there have been 21 cases and five deaths from EEE this year — an increase from the annual average of seven cases and three deaths.


While there is no human vaccine or disease-specific treatment for EEE, measures can be taken to reduce the risk of infection. To protect against bug bites, health officials suggest wearing long sleeve shirts and full-length pants, applying Environmental Protection Agency-approved bug spray, and avoiding boggy and swampy areas where mosquitoes breed. Additionally, use screens for windows and doors, avoid outdoor activities between sunset and sunrise when mosquitoes are most active, and empty standing water from tires or buckets to avoid creating breeding areas for mosquitoes.