Harbaugh for Senate? The U-M coach could be just what the Michigan GOP needs

Don’t laugh — political interest seems to be a character trait 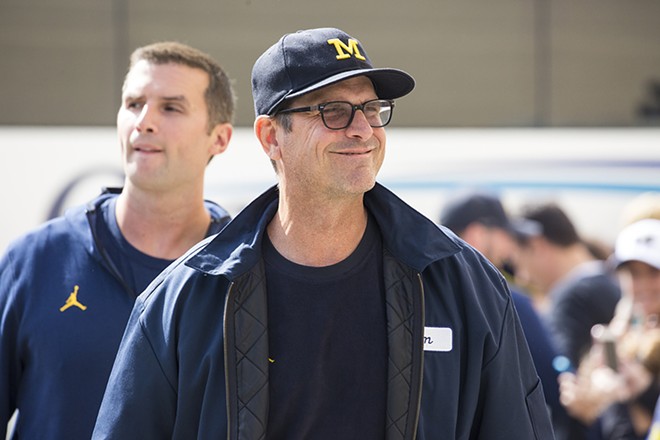 When Texas Christian University upset Michigan in the national college football semi-final on New Year’s Eve in the Fiesta Bowl, the TV camera showed Wolverines fans reacting with disbelief to Coach Jim Harbaugh’s timeout strategy as the seconds ticked away late in the fourth quarter.

As it turned out, those sideline decisions on timeouts weren’t as damaging as several other calls by Harbaugh in a 51-45 upset by the Horned Frogs. But that defeat hasn’t deterred Harbaugh’s annual case of itchy feet. Once again, he’s job-shopping around the National Football League.

Early tickles are coming from Denver and Carolina and there are likely to be more. Last year, Harbaugh got rejected by the Minnesota Vikings, but such things don’t discourage a man whose reach sometimes exceeds his grasp.

So here’s another possibility — perhaps tongue-in-cheek — for Harbaugh’s next job: He should run for the U.S. Senate seat from Michigan to replace the Democrat Debbie Stabenow, who announced Thursday that she will not be a candidate again in 2024.

Of course, some right-wingers would question whether Harbaugh is a true Republican, at least in the MAGA sense. Perhaps Harbaugh would, too. He often comes off as a libertarian whose politics lurch from side to side.

He has supported Black Lives Matter, given a shout-out to Malcolm X, and shown a willingness to be open-minded to both liberal and conservative positions.

When football players protested police violence by genuflecting on field during the national anthem, Trump called the players “sons of bitches” and said owners of teams should fire them.

“No, I don’t agree with the President,” he said in 2017. “Listen, that’s ridiculous. Check the Constitution.”

Political interest seems to be a character trait.

In a profile of Harbaugh that year, Politico magazine wrote that Harbaugh “sat down one-on-one with President Barack Obama, dropped in for meetings with half the Supreme Court and slipped into a rally on campus where Obama was stumping for Hillary Clinton.”

If Republicans were to recruit Harbaugh as a Senate candidate, Granholm would be a logical Democratic opponent. She served two terms as Michigan governor and has stayed visible and viable as Secretary of Energy under President Joe Biden.

The Great Lakes State has turned from red to blue in recent elections, thanks in part to popular constitutional amendments regarding marijuana and abortion rights.

Reaping the benefits have been liberal female Democrats like Governor Gretchen Whitmer, Secretary of State Jocelyn Benson, and Attorney General Dana Nessel. Granholm, at age 63, still has good years ahead of her.

This speculation about Harbaugh is not to endorse him or to suggest that every football celebrity would make a good candidate for U.S. Senator. Consider Walker, who last fall lost a regular election and a runoff to Ralph Warnock, the Democratic incumbent.

Reviewing the Walker campaign, the website Deadspin reported some of the things learned about the former star running back of the Georgia Bulldogs and the Dallas Cowboys.

“He terrorized his ex-wife, alienated the only son he acknowledged existence of — denigrating his looks and intelligence ... and was regarded as a shameless and obvious habitual liar to his own campaign staffers,” Deadspin wrote, adding, “He represented himself to be a born-again Christian, yet hid multiple children born out of wedlock.”

“Since we don’t control the air, our good air decides to float over to China’s bad air,” Walker said. “So, when China gets our good air, the bad air got to move. So it moves over to our good air space. Then, now, we’ve got to clean that back up.”

Despite exposing himself as a Trumpist bumpkin, Walker still won 48.63% of the vote in the runoff against 51.37% for Warnock.

Would Harbaugh as a candidate for a Michigan Senate seat be an improvement over Walker in Georgia? Of course. He’s glib and better at dodging dodgy questions. But he might have to answer for stuff that he has thus far fudged. For instance:

Harbaugh played football for Michigan from 1983 through 1986. His father was an assistant coach for seven years there in the 1970s. In all those years, U-M physician Dr. Robert Anderson molested football players during routine physical examinations.

Players from that era have said Anderson’s misdeeds were common knowledge. But in 2021, Harbaugh seemed to exonerate Dr. Anderson, who was also the family doctor.

Harbaugh in those years was an astute young quarterback and the son of a veteran coach. How could young Harbaugh stay blissfully unaware of a sexual predator in the football program? Come to think of it, maybe father Jack Harbaugh could deal with pointed questions beyond “Jim, what are you doing?”

Joe Lapointe is a Detroit-area freelance writer who is a former reporter for the New York Times and Detroit Free Press. He is working on a sports reporting memoir to be titled either The Fire-Balling Flame-Thrower Threw Bullets to Slam the Door or Local Team Hopes to Win Next Game...
Read More about Joe Lapointe
Scroll to read more Politics & Elections articles