Courtesy Grosse Pointe City
Rendering of the proposed warehouse.
Last week, we published a blog post based on an article in the Grosse Pointe Times that left us speechless. The reason we were rendered mute? The article covered a Grosse Pointe city council meeting where Grosse Pointe City Councilmember John Stempfle complained about the city’s Department of Public Waste site and called it an “embarrassment” and an “eyesore” that attracted rodents. He was even quoted as saying, “We need to get out of there, and we need to get out of there now.” The solution? Moving the city’s DPW operations across Mack Avenue and into Detroit, into a warehouse at 4849 Canyon Rd.

The story told how residents said the DPW site attracted rats, which “have been a constant issue for them,” and carried signs with angry rat faces. One Grosse Pointe woman declared that she had a serious rat problem, and once had a rat die in her home. Getting rid of the dead-rat stench “took months,” she said. The same woman also complained that the DPW site often meant city employees parked in front of her house.

It should come as no surprise that many Detroiters who read the article were aghast at the decision. One commenter on the story wrote, “As a Detroit resident, I’m appalled that Grosse Pointers think sending your rat and garbage problem to Detroit is ‘good for everybody.’ Or do you mean, everybody who ‘counts’?”

Grosse Pointe will fight rat problem around its DPW site... by moving it to Detroit

It took less than 24 hours for residents of such east side neighborhoods as Cornerstone Village, Morningside, and East English Village to get all fired up by the news. The city of Detroit reacted quickly, rescinding Grosse Pointe’s permission to use the site, which Detroit contended was based on an understanding that it would not be used to park garbage trucks or for any other waste-related activity. All of a sudden, Grosse Pointe officials were on the defensive.

Not only do they say that they’re not dumping on Detroit, they say their proposed DPW site on the Detroit side is an investment that will improve the site. They also say that rats will not be a part of the development.

In fact, Grosse Pointe officials says that, despite the testimony about the DPW site’s rat problem from angry residents holding rodent signs at its recent meeting, the DPW site does not attract rats. Councilmember Tomkowiak tells MT that residents were “overstat[ing] the problem,” and adds, “The city of Grosse Pointe’s current public works department is an open-air facility that at one time, yes, did draw rats. That was because garbage was stored there overnight in open pits. That practice was stopped in 2013, and the city now has a regular pest-prevention program. So rats are a thing of the past.”

Councilmember Tomkowiak says Grosse Pointe City, the smallest of the Pointes, just does not have the space for a larger facility. 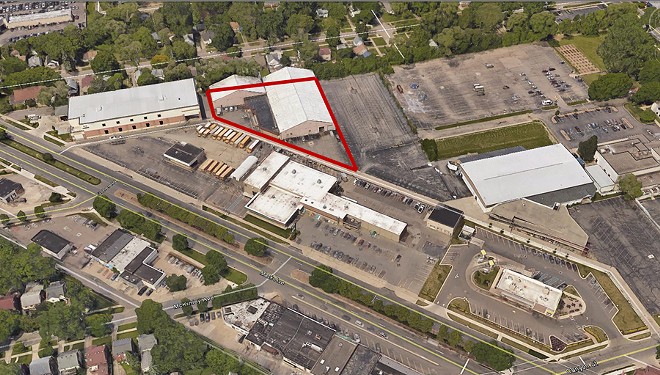 Courtesy Grosse Pointe City
Site of proposed warehouse.
She also says, “Grosse Pointe City’s plan is to spend $4.3 million to improve a run-down warehouse in a commercial district on the border of our two communities. We would be rehabbing the building: The exterior would be renovated, a green buffer zone would be added next to the six houses that adjoin one side of the property, and we would rebuild and maintain the alley that runs behind the buildings on Mack. The warehouse would house vehicles, materials and offices for public works employees. The facility is fully enclosed, and the pest-prevention program would continue. None of our trucks would drive down a Detroit residential street.”

Tomkowiak stands by her statement that the move would be “good for everyone.” She says, “I live right across Mack from that facility and consider it my neighborhood, too. I care about Detroit. And I want Grosse Pointe city to be a good neighbor.”

What’s more, she believes Grosse Pointe’s investment in the facility could cause the area to flourish. She says, “I don’t see what is objectionable to investing more than $4 million in a facility that already exists on property that is largely surrounded by commercial enterprises. Our public works department handles more than just garbage pickup. Yes, we do own four garbage trucks, but only one truck is used per day for pickups. … How is renovating an eyesore and committing to maintain that area a negative? How is having people an activity in a largely unused building bad for the surrounding neighborhoods? Money brings money. When someone invests in a district, other investment generally follows. … Maybe people could take a look at the site and the actual plans before deciding that this is a bad idea.”

If the project is really as appealing as she insists it is, we suggested to Councilmember Tomkowiak that perhaps more groundwork needed to be done reaching out to the neighbors of the proposed DPW site.

On this point, Tomkowiak agrees. “We did not do a good job — or really any job — of getting our story out to Detroit residents,” she says. “I apologize for that. We should have reached out to the community groups to explain our plans and ask for input.”

Grosse Pointe intends to push forward with the project.