Green parking lot in Detroit is brimming with 100+ trees

The ‘PARK(ing)’ lot off Grand River features more than 100 maples, evergreens, and sumacs Nothing breaks up the character of a neighborhood more than big, bland concrete parking lots.

In Detroit’s Core City neighborhood, a developer had a different idea: surround the parking lot with trees and clover field berms.

The green “PARK(ing)” lot sits on a triangle-shaped plot of land on Grand River Avenue near Warren and features more than 100 maples, evergreens, and sumacs. With space for 30 cars, the vehicles are concealed by the trees’ lush green canopies.

The low-impact development — the latest project by Prince Concepts – uses pavers and granite ground cover to reduce the impervious surfaces that contribute to flooding and pollute waterways. It was designed by Philip Kafka and Andrew Schwartz of Prince Concepts and renowned landscape designer Julie Bargmann. The green space is designed to compliment Prince Concepts’ Core City Park, a former parking lot across the street that was transformed into a brick-paved courtyard plaza with trees, plants, sculptures, benches, tables and chairs and a bonfire pit.

Prince Concepts’ other developments in Core City include an Argentinian restaurant, office space, and an eight-unit building with wooden porches, trees, and a winding path.

These projects helped Prince Concepts become recently named the “Best of Practice” developer in the Midwest by The Architect’s Newspaper.

“It’s not the most profitable idea, but if you really believe in the future, you plant trees, because that’s what I really believe — planting trees communicates belief in the future,” Kafka previously told Metro Times. “I can’t wait. Like, imagine this park in 10 years when these trees are growing up. It’s going to be magnificent.”

The city of Detroit has also embraced planting new trees. In October, the city embarked on a five-year project to plant 75,000 trees across Detroit. 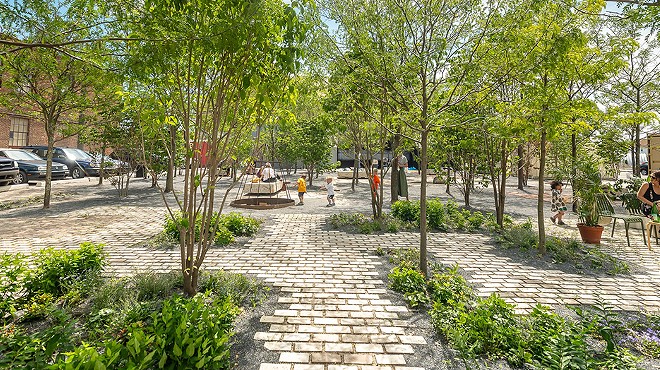