Christopher Schurr was charged with second-degree murder in June 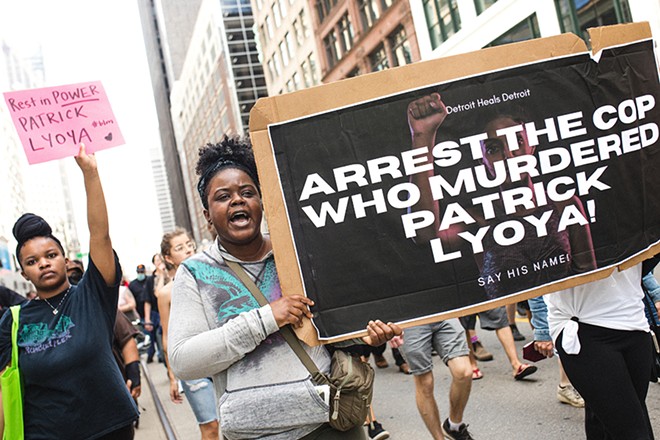 Viola Klocko
Protesters demanded justice for the death of Patrick Lyoya, who was shot in the back of the head by Grand Rapids cop Christopher Schurr.

The Grand Rapids cop charged with second-degree murder for shooting Patrick Lyoya in the back of the head following a traffic stop was ordered Monday to stand trial.

District Court Judge Nicholas Ayoub said there was sufficient evidence to warrant a trial for Christopher Schurr, who was fired by the Grand Rapids Police Department in June, less than a week after he was charged.

“The case will now rightfully move to trial, which is the next step in our pursuit for obtaining full and complete justice for the murder of Patrick Lyoya,” attorneys Ven Johnson and Ben Crump, who are representing the Lyoya family in a civil suit, said in a statement. “Our legal team will continue to fight to ensure former Grand Rapids police officer Christopher Schurr and the City of Grand Rapids are held accountable for his actions.”

The shooting stemmed from a traffic stop on April 4 over a mismatched license plate. Lyoya, who is Black, was behind the wheel when Schurr, who is white, pulled him over. Lyoya got out of his car and refused Schurr’s demands to get back in his vehicle.

“Dude, I’m stopping you,” Schurr said. “Do you have a driver’s license? Do you speak English?”

Schurr tried to grab Lyoya, who fled to a nearby yard, where he was tackled by Schurr. They tussled for a couple of minutes before the cop tried twice to deploy his stun gun.

Grand Rapids Police Department
Video from the officer's body camera caught the moments before the fatal shooting.
After Lyoya appeared to grab the stun gun, Schurr pulled out his department-issued pistol and shot Lyoya in the back of the head.

Many people questioned why Schurr, who had no backup, would chase Lyoya over a traffic violation. By tackling Lyoya, Schurr put himself in a situation where he’d likely have to use violent force over what amounts to a traffic ticket.

Schurr’s attorney argued the shooting was justified because his life was in danger.

No date has been set yet for a trial in Kent County Circuit Court.