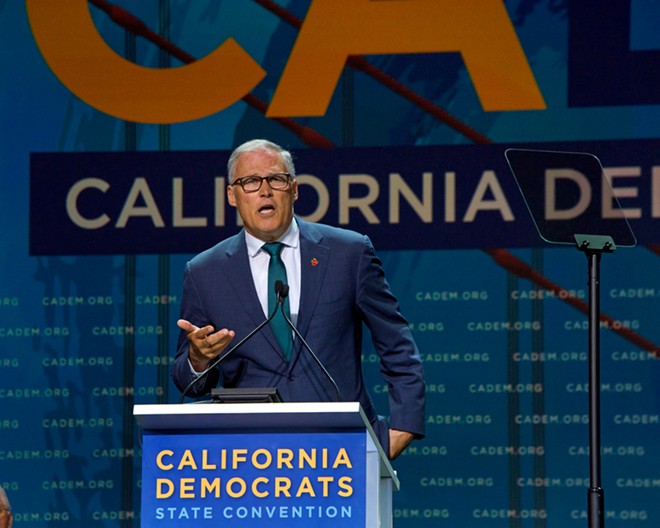 The governor announced the news on Wednesday, calling on his fellow Democratic candidates to join him in opposing the pipeline:

“The Enbridge Line 5 pipeline, and the proposed oil tunnel to replace it, are a clear and present threat to the health of the Great Lakes and to our climate. They threaten the clean drinking water that millions depend upon. And they would lock in decades of climate pollution that we can’t afford. Line 5 is a 66 year old pipeline that was built to last only 50 years, but that still uses Michigan and the Great Lakes as a short cut to deliver Canadian oil to Canadians. This dangerous pipeline must be decommissioned, the proposed oil tunnel must not be built, and clean alternatives must be explored immediately."

“It is imperative that we invest in building an American clean energy future, and defeat climate change with good-paying jobs that grow clean energy industries. But to do this, we must reject the dirty fossil fuel projects of the past. Already the clean energy sector employs three times more American workers than those that work in fossil fuels — and four time as many in the Midwest. My Freedom from Fossil Fuels Plan clearly articulates how America can and must reject projects like the Line 5 pipeline and tunnel, and transition our nation off of fossil fuels. And my Evergreen Economy Plan shows how we will create 8 million good, family-wage and union jobs building a more just, innovative and inclusive clean energy economy."

“I want to thank all of the groups fighting to protect their Great Lakes and our climate from the dangerous Line 5 oil pipeline. When the Democratic debates come to Michigan later this month, the Enbridge Line should be a major topic. I hope that every fellow Democratic candidate for President joins me in opposing this dangerous pipeline."


Inslee joins a growing chorus of concern about the aging pipeline, especially here in Michigan. Last month, Attorney General Dana Nessel filed a lawsuit asking a court to shut the pipeline down. Gov. Gretchen Whitmer's administration has also requested the Michigan Department of Natural Resources issue an opinion on whether the pipeline's owner, Canadian oil giant Enbridge, is in compliance with a 1953 easement that allows it to operate the line.

The announcement comes ahead of the second round of Democratic debates, which will be held on July 30 and 31 at Detroit's Fox Theatre.