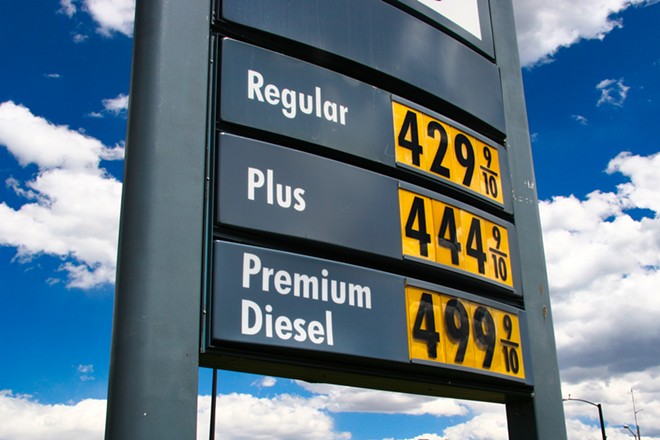 The GOP-led Legislature is also working on a resolution that calls on Gov. Gretchen Whitmer to support “energy independence” and end her opposition to the Enbridge Energy Line 5 pipeline that runs under the Straits of Mackinac.

The average price of gas in Michigan reached $4.24 per gallon on Wednesday, which is a penny below the national average, according to AAA.

Gas prices have surged an average of 64 cents a gallon in recent days following Russia’s invasion of Ukraine.

By suspending the state gas tax, Republicans said drivers would save about $750 million.

But Republicans didn't mention that without that revenue, the state would lose out on funding desperately needed to fix the roads and finance public transit.

Early in her first term as governor, Whitmer, who campaigned on a pledge to “fix the damn roads,” proposed a 45-cent-a-gallon fuel tax increase to finance road improvements. Lawmakers ditched the plan.

On Tuesday, Whitmer joined five other Democratic governors to call on Congress to suspend the 18-cents-a-gallon federal gas tax.

Republicans said their plan would save more money than Whitmer’s.

“Instead of using her pen to write letters to Nancy Pelosi and Chuck Schumer, Gov. Whitmer should use it to sign the bill cutting taxes for every Michigander that’s collecting dust on her desk,” state Senate Majority Leader Mike Shirkey, R-Clarklake, said in a statement. “This is a serious situation that requires more than letter writing and the magnanimous gesture of asking someone else to foot the bill. Six in 10 Michiganders are living paycheck-to-paycheck, struggling to feed their families, heat their homes and put enough gas in their cars to get to work. Republicans in the Legislature will again vote to help residents keep more of what they earn, but we need the governor to lead instead of abdicating her responsibilities to Washington.”

The House plans to vote on the bill suspending the state’s gas tax on Wednesday. The Senate would vote on the legislation next week.

If passed, it's unclear if Whitmer would veto the bill. Metro Times couldn't immediately reach her office for comment.

“Why in the world would we write a letter to Congress asking for lower gas prices somehow someday when we can just step up and fix it ourselves?” state House Speaker Jason Wentworth, R-Farwell, said. “Michigan has billions of dollars in surplus revenue available and one of the nation’s highest state fuel taxes. The solution here isn’t complicated. Republicans are going to take action today and put a real plan on the governor’s desk to actually lower the cost at the pump.”