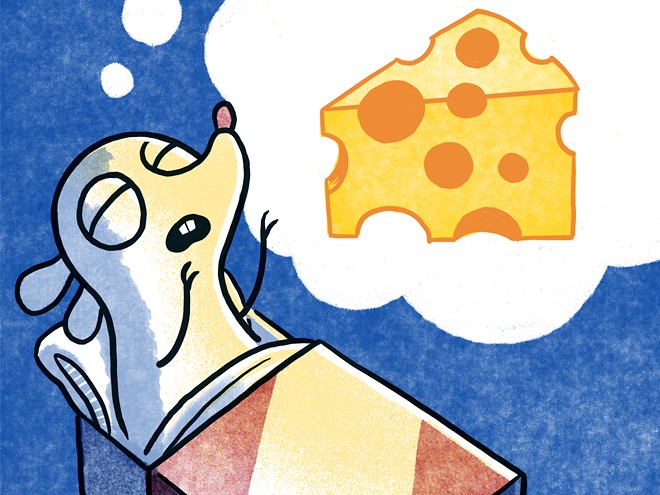 I'm wondering if you can help me with some dream interpretation. If it helps for context, I'm a single 29-year-old gay man. For just about as long as I can remember, I've been having mildly unsatisfying sex dreams in that the dreams never seem to lead to sex itself. My dream partners range from people I work with to people from high school to celebrities I'll never get the chance to meet. I never dream about someone I wouldn't want to sleep with in the waking world, given the opportunity. The scenarios are generally different as well. Sometimes the sexual tension is palpable, but we're in a crowded room. Sometimes we get close enough to get started but the setting is off. Sometimes we start to get hot and heavy but the dream ends just prior to the sex. In each case I wake up frustrated and masturbate to finish the fantasy. I've been pretty sexually starved during the pandemic, Dan, so you can imagine my frustration when I woke up this morning having almost had dream sex with Andrew Rannells. Can you think of why this might be happening? Any advice would be appreciated!

“Well, this is certainly VERY interesting,” says actor, singer, and author Andrew Rannells. “I’m honored I made the list of people DREAMER would actually have sex with in real life, if given the chance.”

Seeing as this two-time Tony Award nominee is taken — Rannells fell in love with Tuc Watkins, one of his co-stars in Boys in the Band on Broadway, and the two men now live together in Los Angeles — there’s not much chance of something happening between an anonymous “Savage Love” reader, DREAMER, and Rannells, one of the stars of The Prom on Netflix. But Rannells was more than happy to do a little amateur dream interpretation for a fan.

“As for the root of this issue,” says Rannells, “I suppose it could have something to do with not having the confidence of actually following through with the full act? Maybe while awake he could experiment with fantasizing about a more complete experience and see if that changes his dream life?”
My two cents: Perhaps these dreams are lingering evidence of some shame about your same-sex desires — which is why your dream universes conspire to prevent you from having gay sex — or perhaps the continued existence of bigots who would prevent gay men from having sex preys on your subconscious mind and manifests in the form of these frustrating/frustration dreams. Or maybe there’s no way of knowing what the hell is going on here and trying to attach meaning to something as random as a dream is a waste of time or a scam or both.

After years of receiving oral sex from girlfriends who were careful to never inflict any sort of pain on my testicles, I met a woman who wasn’t so careful. For our fifth date, she came back to my place and we watched a movie. After the movie we began to kiss and soon she was making love to my stiff penis with her mouth while rather roughly massaging my testicles. However this came to be, I was liking it quite a bit. The more pressure she applied to my testicles, the harder my penis became. This has never happened to me in my 33 years of lovemaking! I actually asked her to squeeze my testicles harder and harder and I can honestly say my penis was harder than it has ever been. Against my better judgment, I asked her to squeeze my testicles as hard as she could. After several seconds of the most intense pressure she could provide, I had the most powerful orgasm I have ever had. All of a sudden, I was dizzy and my vision went black. When I finally came back to reality, there was an extraordinary amount of come all over the place. She has made love to my penis dozens of times since in the same manner. My question: Will there be any physical complications to my newly discovered taste for this kind of play? I look forward to your response!

Ball busting — the kink you stumbled on — is inherently risky, TESTES, in that you could actually rupture, aka “bust,” one or both of your balls. Hence the name. But considering how much pleasure you’re deriving from this and considering how short life is and considering how long you’ve been sexually active and considering how little use you’re gonna get out of your balls once you’re dead, TESTES, I don’t see any reason why you should deprive yourself — at this stage — of this newly discovered sexual pleasure. Well, actually … I can see one reason why you might want to knock this off: When it comes to ball busting, TESTES, there’s no way to eliminate the risk of a physical complication that lands your sack in the emergency room, and E.R. nurses and doctors have enough on their plates right now. So maybe give your balls a break until after the pandemic is over and then go nuts.

I’m writing in response to WHY, the Italian fellow whose partner has a significantly lower libido than he does. I’d like to share my perspective. I have a high libido, and my partner of more than 20 years has a low libido. From the perspective of the person with the lower libido, there’s no problem to address. The person with the lower libido gets to have sex whenever they want. When they don't want sex, it doesn't happen. If WHY wants to engage his partner in a conversation about this, he has to make it clear this is a make-or-break situation. Use very specific language like, "If we can't talk about this, I’m leaving,” or, “If we don't go to counseling, I can't stay in this relationship.” In my case, I did not communicate how important the issue was, and my partner didn’t think we needed to talk about it because it wasn’t a problem for her and she didn’t know — because I didn’t tell her — how much of a problem it was for me. Eventually, I acted out and had a random hookup. We wound up in counseling, which got us talking, but nothing changed the fact that we have very different libidos. More than likely, I’m moving out when our youngest son goes to college. If I had to do it over again, I would’ve let my partner know exactly how important it is to me that we have a healthy, robust sexual relationship. Having a difficult conversation is better than acting out in a way that puts everyone’s health at risk and damages trust. I have no idea if that would’ve changed things between us, but I’d feel a whole lot better about how things went down.

Thank you for sharing, OMO, and here’s hoping you get a chance to “do it over again.” With a new partner, if you wind up leaving your partner, or with the partner you have now, if you stay. There’s nothing you can say to change your partner’s libido, OMO, but if you keep talking you may be able to work out a compromise or an accommodation that takes the pressure off her (to round her libido up) and off you (to round yours down). Good luck.

Questions: [email protected]. Follow Dan on Twitter: @FakeDanSavage. On the Lovecast, learn all about your pelvic floor with Dr. Rachel Gelman: savagelovecast.com.