Flint water crisis investigation leads to charges against Snyder, 8 others 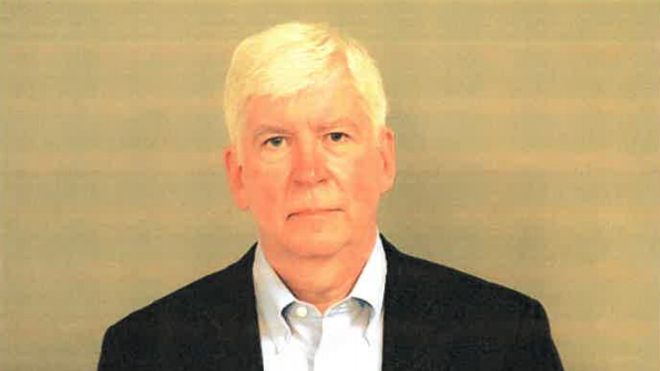 The defendants, including Snyder’s top aide Richard Baird, his two lead health officials, and former Flint emergency managers Gerald Ambrose and Darnell Earley, turned themselves in Thursday morning and were arraigned in court in Genesee County.

“This case has nothing to do with partisanship. It has to do with human decency, resurrecting the complete abandonment of the people of Flint, and finally, finally, holding people accountable for the unspeakable alleged atrocities that harmed this city for years,” Wayne County Prosecutor Kym Worthy said at a news conference. “Pure and simple this case is about justice, truth, accountability, poisoned children, lost lives, shattered families that are still not whole, and simply giving a damn about all of humanity.”

Snyder faces up to one year of jail on two counts of neglect of duty.

“We believe his willful neglect of duty amounted to a crime,” Solicitor General Fadwa Hammoud said.

The other defendants are facing stiffer penalties. Baird, who served as Snyder’s senior advisor, faces up to 20 years in prison on one count of extortion, perjury, official misconduct in office, and obstruction of justice.

Ambrose and Earley were charged with several counts of misconduct in office, which carry a maximum penalty of 15 years in prison.

Nancy Peeler, who still serves as the early childhood health section manager for MDHHS, was charged with two counts of misconduct in office and one count of willful neglect of duty. She faces up to five years in prison.

Snyder’s former director of communications and chief of staff, Jarrod Agen, was charged with one count of perjury, a 15-years felony.

Howard Croft, former director of Flint’s Department of Public Works, was charged with two counts of willful neglect of duty, a misdemeanor that carries a maximum penalty of one year in prison.

"Let me be clear, there are no velvet ropes in our criminal justice system," Hammoud said. "Nobody, no matter how powerful and how well connected, is above accountability when they commit a crime."

The city of Flint, while under state emergency management, switched its drinking water supply to the Flint River to save money in 2014. The decision created one of the nation’s worst public health disasters in decades, contaminating drinking water with dangerous levels of lead.

State officials ignored signs of serious health hazards in the predominantly Black city and failed to implement corrosion-control treatments, causing lead, iron, and rust to leach from aging pipes into the water supply.

At least 12 deaths have been tied to the water crisis.

“This is one of the largest criminal investigations currently under way in the world,” Worthy said.

“Through the course of this investigation, we have reviewed literally millions and millions of documents, and several hundred electronic devices, executed dozens of search warrants, worked countless hours even in the midst of the COVID-19 pandemic.”