Everything is falling apart in Michigan

Today's legislators, and all those in power in recent decades, better hope nobody in the future invents a time machine. The temptation to come back and kill them, slowly and painfully, might be irresistible.

That's because our entire nation is falling apart.

It's largely their fault, and ours for not demanding better of them. And Michigan is falling apart worst of all.

I don't mean morally or spiritually, though that may be very true too. (See Trump, Donald J.) I mean physically. Our infrastructure is collapsing. You know about the roads, of course; we all do.

But it's not just the roads — it's everything.

The current bunch of so-called leaders in Lansing have done nothing, by the way, to make the roads better — except a bullshit plan to provide $1.2 billion in "new money" by 2021 that will take half of that from the general fund, cutting spending for things like foster care, state police, and schools.

But beyond the roads and bridges, everything is decaying and collapsing. Billions of gallons of untreated sewage are flowing into our waterways. Two years ago, a major state study found that the rivers that drain 84 percent of the water in this peninsula tested positive for human sewage, which is a slightly more genteel word than shit.

Power plants in the Upper Peninsula are wearing out, with neither the money nor plans to replace them. Here beneath the Mackinac Bridge, where 97 percent of Michigan's population lives, the bigger threat is indeed being drowned in or poisoned, again, by our own piss and shit. (Sorry to be vulgar, but the reality is more so.)

Few were paying attention, but two weeks ago the Michigan Section of the American Society of Civil Engineers gave our state a D+ on their annual infrastructure report card. That included a D for safe drinking water. "It is estimated that drinking water system owners in Michigan are underfunding system improvements for Safe Drinking Water Act compliance," by maybe half a billion dollars a year, the report said.

That might be great for an ad for the bottled water industry, but otherwise is pretty appalling. Interestingly, besides roads, we scored worst of all in our infrastructure for treating stormwater.

Remember the flash flood in August 2014, that flooded homes and basements in much of the metro area? Many of the pumping stations turned out to be inoperable, because vandals had stripped out the copper wires necessary for their operation.

"Currently, Michigan even lacks a way to inventory, operate, and maintain our stormwater infrastructure," according to the civil engineers' report. This is something we could readily fix.

That is, if we want to. "Michigan is poised to address what's broken and protect our residents' safety by making (the) necessary investments to improve our infrastructure," says Myndi Bacon, who was co-chair of the engineers' Michigan report card team.

"We can rebuild our roads, make our bridges safer, and prevent costly water main breaks — all things that will save us money in the long run," she adds. Of course she's right. There's also no way this state is ever going to attract any major new industry, investment, etc. with an infrastructure that is fast approaching that of Haiti's.

But that would require will, short-term sacrifice on all our parts, and some political leaders with the guts to do what's necessary even if it is unpopular. We don't have any of these things.

Michigan's lawmakers should have been asking us — especially those among us who are better off — to pay more taxes to fix our state and have a future. But you won't find any of that in Lansing.

Instead, the intellectually bankrupt and morally depraved clowns who squat in our legislature have just enacted a tax cut which will give millions in tax breaks to the rich and will mean pocket change to the rest of us. They know very well what they are doing.

But they don't care. They think they will be term-limited out of office long before total disaster hits this state. Some dare not ask us to pay more taxes because they want to run for higher office.

Others, mainly Republicans, fear that if they told the truth and stood up for what is right, they would be defeated in primary elections by morons and maniacs even more ignorant and crazy than they are.

So they do nothing, when anyone familiar with the facts knows that our decaying infrastructure needs are worth at least as much sacrifice as we were willing to make during World War II.

There are two other horrifying things about the civil engineers' report card, and they are directly related. The first has to do with roads and bridges. The engineers reported that 39 percent of all paved roads in Michigan are in poor condition.

They also found that we have a staggering 1,234 structurally deficient bridges, with the number of bridges in poor condition likely to increase by 50 percent between 2016 and 2023.

But the really bad news is that the truth is likely much worse. Those figures are nearly two years old, a spokesman for MDOT, the Michigan Department of Transportation, tells me.

That's because they come from a massive report released in late November 2016, by a special "21st Century Infrastructure Commission" of experts appointed by Gov. Rick Snyder.

Their report, which can easily be found online, documented the effects of decades of neglect. What's even more appalling is that in recent years, Michigan spent a smaller percentage of its budgets on maintaining and improving infrastructure than any other state.

Nationally, the average was an inadequate 10.2 percent. Michigan spent a meager 6.4 percent, not nearly enough to stem the rot. The infrastructure commission's final report, also easily findable online, said we'd need to spend about $4 billion a year for a few years at least just to get things back where they should be.

But that would take a kind of political courage that hasn't been seen since President John F. Kennedy's inaugural address. Snyder did propose establishing a new Michigan infrastructure fund, and asked the legislature to start it off with $165 million. They put in... $5 million.

So I hope you enjoyed Western civilization while it lasted. When the collapse of that bridge kills your kids, or someone you know dies from tainted drinking water, just remember this: We've totally done this to ourselves. 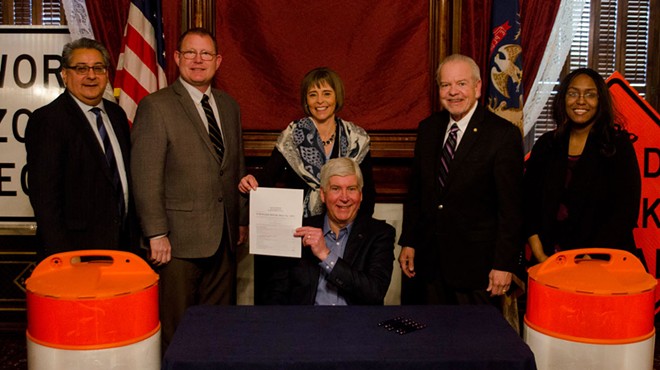 Get cultured: Easter break is coming up, and if you have a long weekend, go to Montreal, where prices are reasonable, the food is mainly spectacular, and where it will be your last chance to see one of the most compelling special presentations I've ever seen.

Most of Montreal's Museum of Contemporary Art is devoted to a multimedia exhibit on the life and work of Leonard Cohen. You probably know him as a singer and songwriter; his influence as a poet and philosopher may be even greater. The exhibition, which closes April 9, is called A Crack in Everything, which is clearly true. What we sometimes forget is, as his immortal song "Anthem" told us, "That's how the light gets in." Cohen, whose music and sardonic wit has helped keep me going for the last half of a century, had the good sense to die the day before the last presidential election.

Fortunately, he left behind an amazing body of work to help us endure, and to maybe inspire us to roll the stone back up the hill.