The 16-year-old faces up to life in prison 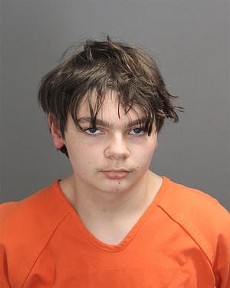 Ethan Crumbley pleaded guilty Monday to murder and terrorism charges in connection with a mass shooting that killed four students and wounded seven others at Oxford High School.

The 16-year-old faces up to life in prison.

Crumbley is due back in court on Feb. 9 for a review hearing. The sentencing date has not yet been scheduled.

Just days before the Nov. 30 massacre, Crumbley’s father bought him a semi-automatic handgun, which he used to open fire on classmates.

Two boys and two girls, between the ages of 14 and 17, were killed, and six other students and a teacher were wounded.

Crumbley was 15 years old at the time of the shooting.

In the aftermath of the shooting, several lawsuits were filed against Crumbley, his parents, and school officials.

“Ethan Crumbley’s guilty plea is one small step forward on a long path towards obtaining full justice for our clients,” attorney Ven Johnson, who is representing some of the families in a civil suit, said in a statement. “We will continue to fight until the truth is revealed about what went wrong leading up to this tragedy, and who, including Crumbley’s parents and multiple Oxford Community Schools employees, could have and should have prevented it.”

In the days before the shooting, school officials failed to intervene despite a pattern of troubling behavior by Crumbley. He told his mother he was seeing demons. A day before the shooting, he was caught at school searching for ammunition online. And on the day of the shooting, a teacher spotted an alarming drawing in which he depicted a person who had been shot and the words, “The thoughts won’t stop. Help me.”

Crumbley’s parents James and Jennifer Crumbley were charged with involuntary manslaughter and are awaiting trial.