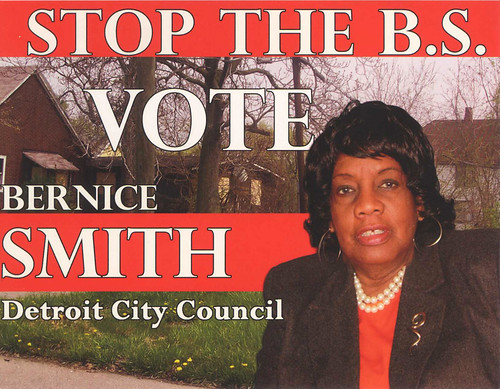 Bernice Smith: Since her initials are B.S., is she saying she must be stopped?

Pawing through a stack of fliers for Detroit candidates in this round of elections, we found some doozies. With Sam Riddle tied up during this election cycle, the current crop of candidates seems to sorely lack the finessing of a skilled adviser’s touch.

Especially notable is the flier that heads this post, trumpeting Bernice Smith for Detroit City Council. We assume that her slogan, “Stop the BS,” means she wants to see an end to the layers of bullshit associated with city government. Unfortunately, she appears to have failed to make the small leap required to understand it could also be construed as a reference to her own initials. That would indeed be a novel approach to electioneering, in essence saying to voters, “Stop me before I run again!” (It’s like the joke where a bank robber cornered by police holds a gun to his own head and warns the cops, “Take a step closer and I shoot.”)

But that’s nothing compared to Michigan Democratic Future’s write-in candidate for the Detroit school board, Khadijah Shabazz. The flier drawn up to promote her candidacy is a fascinating document. Normally, we tweak official statements to reflect the norms of English grammar, but here we must defer to the skills of Shabazz, who wants a hand in directing the city’s schools. To show just how qualified she is to be in the education game, all quotes are presented as they originally appeared.

First off, Shabazz urges us to “Support Change For The Academic Success And Social Development Of Our.” Now, here you may ask, “Of our ‘what?’” But it’s left unsaid. We presume she means “children” — as opposed to, say, gila monsters.

Below this call to action, Shabazz cries, “‘It’s Not Enough To Sit And Complain Or Point Blame.’” The original single quotation marks are hers, presumably for emphasis, but most interesting is the idea of how you “point blame.” Does she mean “place blame?” In any event, we’ve never heard of “point blame.” (We’ve heard of Point Break, if that’s any help.)

It goes on like this: “The cold reality is that our children are not learning competitively compared to their suburban graduating, or attending and completing institutions of higher learning.” Wow. I was with her right up until she began making that comparison. Honestly, I was especially delighted that she didn’t invoke Bush-era grammar and say “our children is not learning.” But, to praise where praise is due, at least there’s this admission of reality that schools can’t run on our faith in them alone.

But that’s sort of weird, because it’s followed up with this thought, “We need leadership that still has faith in our public educational system.”

So, the system isn’t working, and we have to open our eyes to that. But we do need leadership that believes in the system, which just happens not to be working right now. Ummm

Then there’s this strange statement that has nothing to do with Shabazz’s run: “Our children are not generation X they are generation Next- Next in line to run the Next Detroit; they talented musically, very interested in technology and engineering; creating their own wealth as entrepreneurs, cosmetologist, & very interested in the medical field. -”

Phew! Quite a block of text! Kudos to Shabazz for talking up the next generation, but I think many of them would prefer another person to take up the pen in their defense. As this paper’s humble copy editor, yours truly found himself unconsciously reaching for the red pen on this one. Of course, it’s “Generation X” — not “generation X.” And it probably should be “Generation Next” too, followed by a real, live dash (—), not a hyphen (-). Of course, the children are talented musically. Aside from the improper use of a semicolon and the inappropriately informal ampersand, this run-on sentence’s other crimes include the implication that our children want to become a “cosmetologist.” Apparently, the write-in candidacy didn’t have funds for another ‘S’ in its budget.

In summary, when candidates for the school board can’t even write a coherent pitch for why they want to be part of that august body, why should we vote for them? Why should a political group like MDF support them? If they intend to do so, why don’t they at least hire an educated person to proofread their candidate’s fliers? Discuss.