Don't panic: It's not petcoke, it's coke breeze 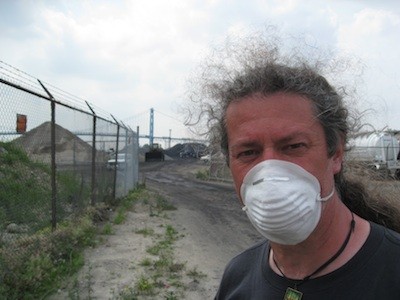 Photo by Curt Guyette
A protester stands in front of the piles of petcoke that graced the riverfront in 2013. The piles have since been removed.

Let's all take a deep breath here. (Although we may want to put on some air filter masks first.)

First, let's catch up on some history: You may remember a few years ago when piles of petcoke began rising on the waterfront, causing residents to complain about the gritty, greasy stuff blowing into their open windows, even when workers were spraying it down to keep it from being carried by the wind.

The neighbors didn't like the piles of petcoke or the swirling dust that contained relatively small amounts of toxic material. What a bunch of crybabies, right?

The city was also upset that the company storing the mammoth piles of petcoke were stored "without proper zoning clearances," "necessary permits" and in violation of "applicable height restrictions." How petty can you get?

Not that it's dangerous when blowing around, of course. It's totally safe. And anybody who says otherwise is just ... a crybaby.

Oh, and they totally stopped storing it there. We're guessing the reason why was because it just didn't make economic sense, not because of neighbors getting hopping mad about it.

So let's bring ourselves back to the current day: A bunch of people are upset that there's another pile of maybe somewhat volatile stuff rising on the riverfront. Let me be the first to tell you, it's OK: It's not petcoke. It's "coke breeze." (New Coke, anybody?) And a lawyer for the company storing it says coke breeze is entirely different than pet coke.

As Fox2 reports, reassuringly, "Unlike pet coke, this material doesn't cause cancer but it poses some health risks many are concerned about." (Wait, petcoke caused cancer? Forget that part.)

You see, this time, things are different. It's totally safe. And anybody who disagrees is a big, fat crybaby.

Sure, there are a few passing similarities to what happened a few years ago. Yes, the city is complaining that the new pile of relatively safe stuff been stored without a permit. And, sure, the main problem is dust that blows off the piles into people's homes. But it's really, totally different.

If you still have any doubts about the safety of the coke breeze that's breezing around in Southwest Detroit, rest easy. The Michigan Department of Environmental Quality is sending inspectors. Yeah, sure, they took a beating in the recent case where they insisted the water in Flint was safe to drink, but that's just an anomaly.

Disagree with that? You're obviously just a crybaby.