Can a judge actually order the city to sell off its Picassos? 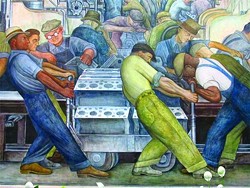 The usually self-assured know-it-alls here at the Hits had a rare moment of self-doubt last week when we saw what turned out to be a bombshell of a statement from Detroit Emergency Manager Kevyn Orr’s office.

“While there is no plan to sell any assets, it is possible that the city’s creditors could demand the city use its assets to settle its debts,” warned EM mouthpiece Bill Nowling. “The emergency manager has alerted certain assets, including the [Detroit Institute of Arts], that they might face exposure to creditors should the city be forced to seek Chapter 9 bankruptcy protection.  This is a precautionary measure.”

What had us perplexed was the belief that one advantage of federal Chapter 9 bankruptcy is that a judge couldn’t order a city to sell off its assets. Surely, we thought, a high-powered Washington lawyer such as Orr couldn’t be wrong about something as fundamental as that.

Just to make sure, though, we put in a call to Prof. John Pottow, a bankruptcy expert at the University of Michigan School of Law. Pottow helpfully directed us toward section 904 of the federal code, where we found this:

“Notwithstanding any power of the court, unless the debtor consents or the plan so provides, the court may not, by any stay, order, or decree, in the case or otherwise, interfere with —

(1) any of the political or governmental powers of the debtor;

(2) any of the property or revenues of the debtor; or

(3) the debtor’s use or enjoyment of any income-producing property.”

So, those references to a debtor’s property:  Does that mean a judge couldn’t actually order the city to sell off its Picassos?

So, what is there to be afraid of? Creditors and their demands? Federal judges? No; at least not directly. It is the emergency manager law pushed through by our nerd-in-chief, Gov. Rick Snyder.

On the day of his appointment, Orr told an audience of reporters that the threat of bankruptcy was a “cudgel” that could be used toward the city’s creditors. Be willing to deal or you’re going to end up in court.

Instead, that big club Orr holds is being waved in the direction of the city, its workers and its retirees. The message is, get ready to sacrifice — a lot — or Detroit’s treasures are going to be placed on the auction block.

Because, you know, there are all these creditors out there, and they have demands. And, according to at least some of the experts we’ve spoken with — as part of the process involved in devising a plan to deal with the city’s debt, those creditors will have a seat at the table.

However, we feel it necessary to remind the EM that said creditors and their demands are but one piece of the puzzle he must consider in his task of drafting a plan that will bring Detroit to the promised land of solvency.

From the outset, the big concern among many has been this: Who will Orr most be looking out for — city residents, workers and retirees, or the Wall Street interests and big banks?

It is a question that goes to the heart of the emergency manager law, itself.

A federal judge may not be able to order an insolvent city to sell off its assets to satisfy creditors, but the emergency manager law, jammed through a lame-duck session of the state Legislature by Gov. Snyder, gives an unelected appointee the power to do just that.

Where were the howls of protest from billionaire art patrons like Al Taubman when that was happening?

Eviscerating the fundamentals of democracy is one thing, but whatever you do, don’t go threatening the sanctity of Rembrandt and Monet. That’s just going too damn far.

There are a few things to keep in mind here.

One is that the real fight isn’t about what happens to the DIA’s treasures, Belle Isle or the city’s water department. It is about the constitutionality of the emergency manager law itself.

Here, at the Hits, we’re starting to lose track of all the federal court cases challenging various aspects of PA 4; the NAACP recently entered the fray with a lawsuit of its own.

So it might well be that the power placed into the hands of Kevyn Orr and the other emergency managers installed elsewhere statewide could end up being a moot point.

For the moment, though, we think the DIA controversy illustrates the dangers inherent in removing checks and balances from the political system. Once power gets unleashed, it becomes like one of those tornadoes that recently ripped through Oklahoma.

No matter how safe you might feel, you can never tell for sure what direction the whirlwind is going to head in, or what exactly might be destroyed.