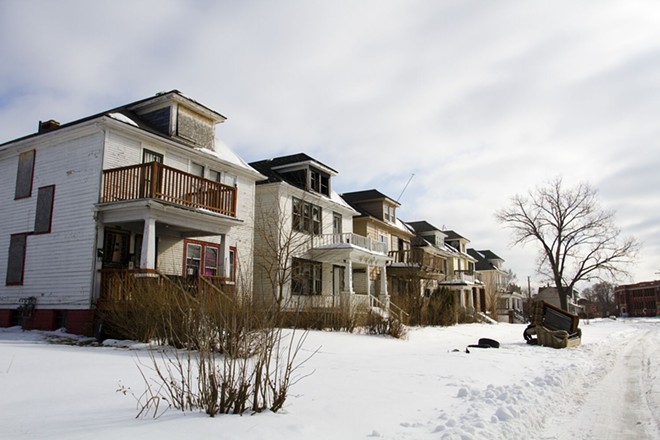 It’s a perpetual cycle that has turned many Detroit neighborhoods into virtual ruins: Suburban, money-grubbing speculators and slumlords buy cheap, run-down houses and fail to make any improvements until the homes ultimately end up abandoned.

On Thursday, the city of Detroit filed several lawsuits against "Detroit’s most notorious speculators and slumlords,” who have purchased more than 1,000 dilapidated homes and amassed thousands of blight tickets. They are Steve and Stephen Hagerman, a father and son from West Bloomfield; Michael Kelly, of Grosse Pointe Woods; and Salameh Jaser, of Dearborn.

Many of the properties feature overgrown yards, crumbling fences, cracked windows, broken doors, peeling and lead-laden paint, and unsafe and unsanitary plumbing, according to one of the lawsuits.

“Our lawsuits mark the beginning of a new effort to address the grave danger of lead in Detroit, among other housing related issues,” Detroit Corporation Counsel Lawrence Garcia said in a news release. “They have demonstrated no respect for the safety of the persons living on their land, and their business model presents an unreasonable danger to the renting public in Detroit. Detroit’s citizens deserve better.”

The landlords are accused of renting dilapidated, lead-laden homes to low-income Detroiters.

“These properties are improperly heated and ventilated — an obvious danger during frigid Michigan winters — and have accumulated solid waste,” the lawsuit states.

When the homes aren’t rented out, they’re neglected and become a fire hazard and a magnet for crime. They drive down property values and turn neighborhoods into eyesores.

“When a child is exposed to lead, irreversible damage is done. Their ability to learn, talk, hear and grow is at risk,” Chief Public Health Officer Denise Fair said in a news release. “At the Detroit Health Department, we are an advocate for reducing lead in homes. It is so important that the City of Detroit continues to hold landlords accountable to ensure that a family’s basic right to safe and secure housing is not violated.”

The declaration states, “The City of Detroit has a crisis — thousands of children living in the City suffer elevated blood lead levels as a result of living in properties with lead hazards. Federal, state and local laws require property owners to take precautions to protect against childhood lead exposure. Many landlords do not comply with these laws, and the failure to abate lead hazards has created this crisis.”