Immortalized in a White Stripes song, the motel could be reborn as apartments or a hotel 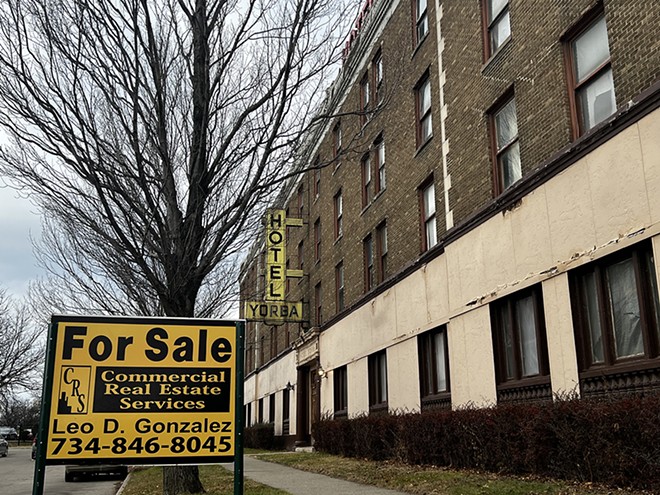 Jerilyn Jordan
“One, two, three, four/ take the elevator at the Hotel Yorba/ I’ll be glad to see you later…”

Southwest Detroit’s Hotel Yorba, the inspiration of the song of the same name by the rock band the White Stripes, is back on the market.

According to a reporter, a for sale sign appeared on the property Wednesday. The real estate listing was reported last week by Crain’s Detroit Business, which notes that the owner reduced the asking price to $2.95 million, down from a $3.2 million deal inked four years ago that never came to be.

The 55,934-square-foot building has a dormitory-style layout with 250 units and common bathrooms on each floor, or what the listing describes as “a low tier Motel.” However, the listing says the “highest and best use for the property to convert to a apartment building or upgrade to a Hotel with new amenities,” envisioning about 70-80 studio, one-bedroom, and two-bedroom apartments.

The listing also touts recent nearby multi billion-dollar developments by Ford Motor Co. and Bedrock Detroit, adding that the city “appeals to the younger generation workforce that desire to live where they work and to be part of live, work and play experience.”

Originally built in 1926, the building had been operating in part as a halfway house for parolees by the time the White Stripes recorded its 2001 single, which adds a different meaning to the love song’s sing-along, country-tinged chorus: “one, two, three, four/ take the elevator at the Hotel Yorba/ I’ll be glad to see you later…”

According to the song’s Wikipedia entry, the band shot much of its music video outside the building, but were denied permission to film inside and are rumored to be “banned for life” from the hotel.

Metro Times could not immediately reach broker Leo Gonzalez by phone or email. A reporter also sent the White Stripes’ former frontman Jack White a DM about the listing. We’ll report back if we hear anything.