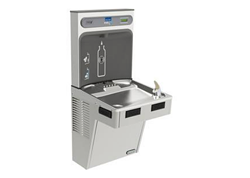 Vitti made the announcement at a board meeting on Tuesday. According to Vitti's proposal, the system would filter contaminants, including copper and lead. Additionally, the district would commit to regular testing and flushing of the system.

The flushing is important because one of the theories is that the elevated levels are due to copper and lead build-up in the pipes. The build-up is suspected to come from lower water usage, which is in turn due to the district's declining student enrollment as the city has lost population.

However, as The Detroit News reports, the cause of the elevated levels in unknown. The district's crumbling infrastructure is an issue; in June, a district report said it would cost $500 million to repair its buildings, and at least $29.86 million to repair or replace plumbing.

Vitti ordered drinking water turned off inside all of Detroit Public Schools Community District's 106 school buildings shortly before the start of the new school year. The district is currently spending $200,000 on bottled water and water coolers for the near future; the water filtration system wouldn't be able to be installed until next year, Vitti said.

Vitti said he has been working with players involved in mitigating the Flint water crisis for advice, including the governor's office, the department's of environmental health, and whistleblower Dr. Mona Hanna-Attisha.

"They have provided lessons on Flint," Vitti said. "They gave the recommendation for me to think about piping in general and a long-term solution."