Detroit property values increase for the first time in 17 years 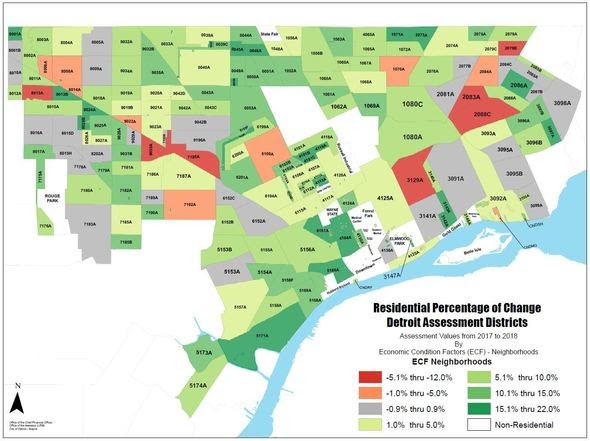 Detroit's narrative as the "Comeback City" just got another boost.

Today, officials announced that for the first time in 17 years, residential property values within city limits have increased by as much as 10 percent.

According to a press release, the assessments are based on actual property sales and reflect an overall increase in the city's cumulative residential property value.

"This is another sign of progress," Mayor Mike Duggan says in the press release. "We still have a long way to go to in rebuilding our property values, but the fact that we have halted such a long, steep decline is a significant milestone. This also corresponds with the significant increase in home sale prices we have seen in neighborhoods across the city."

The increased values could mean properties owners will see an increase in taxes too, but that increase rate is capped at 1.02 percent, according to the press release. When and if the property changes hands, the tax assessment is uncapped and the new owner will be required to pay taxes on the updated assessment.

In 2017, a study conducted by a visiting Wayne State University law professor and an assistant professor of economics at Oakland University found Detroit found 55 to 85 percent of properties to have been assessed in violation of the Michigan constitution every year from 2009 to 2015. The assessments were, at times, far above the legal limit, resulting in higher taxes: The study found that in 2010, assessments were on average more than seven times higher than the legal limit. In 2015, they were more than twice higher.