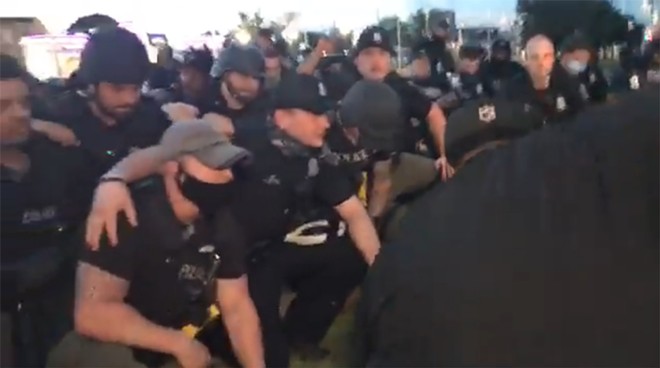 On Tuesday, a well-intentioned Black Lives Matter "social media blackout" campaign was criticized for devolving into "performative nonsense" after it clogged feeds with an endless scroll of black squares, and resulted in the mind-bending phenomenon of the Washington Redskins' account claiming that the team stands against racism. It was also more than a bit strange to see the San Francisco 49ers account get in on the trend considering the team parted ways with quarterback Colin Kaepernick in 2017 after his kneeling during the national anthem in protest of police brutality became controversial. Kaepernick hasn't played in the NFL since.

Kaepernick's symbolic gesture lives on, given new life after a grisly video last month showed a Black man named George Floyd die after Minneapolis cop Derek Chauvin kneeled on his neck for nearly nine minutes. The video ignited Black Lives Matter protests across the country, and as the protests rage on, both demonstrators and police have taken to kneeling as a sign of solidarity with the movement and a way of de-escalating standoffs.

But now it looks like the kneel could also be in danger of devolving into performative nonsense.

That was the case Tuesday evening, when Detroit PD officers kneeled for the media's cameras — just minutes after arresting 100 or so peaceful protesters on the east side. (See the 56:00 mark in this Free Press video.) When Detroit Police Chief James Craig joined the group, they kneeled again, at the behest of members of the community, chanting, "Justice" and "DPD."

The protesters had blocked traffic on Gratiot Avenue, violating the city's 8 p.m. curfew that was issued this week. Police then approached the protesters, forming a line. Suddenly, they swiftly descended on the group, zip-tying about 100 protesters in mere minutes.

None of the protesters had attacked the police officers, as had been the case on previous nights. None of them appeared to be antagonizing the police. And nobody was looting businesses or lighting things on fire, as has been the case in scenes elsewhere in the country for the past few days.

Despite working with the local press to devise a system to keep reporters safe, DPD attempted to arrest the Free Press's Darcie Moran, and Metro Times' Steve Neavling got roughed up by officers in the melée, breaking his glasses.

The protesters and reporters were simply exercising their First Amendment rights during a nationwide protest movement. DPD could have rerouted traffic around the protesters. Instead, they threw them in jail on bond — during the coronavirus pandemic, which has hit Michigan's prisons particularly hard. Several class-action lawsuits have been filed on behalf of Michigan prisoners, alleging that unsafe conditions in correctional facilities amid the pandemic is a violation of their Eighth Amendment right to be free from cruel and unusual punishments.

A similar scene between cops and protesters played out on Sunday night, when Deputy Chief Todd Bettison kneeled with protesters while trying to negotiate with them.

"For tactical purposes, my men cannot kneel," Bettison told the crowd, who demanded they join them in kneeling. "But I will on behalf of them. I will show you that we are with you. I will kneel."

Within minutes, DPD fired tear gas, rubber bullets, and flash bang grenades on the crowd after they said someone threw something at them, arresting dozens.

Like the people who participated in the "blackout" social media campaign, Craig and Bettison appear to have good intentions. Craig attempted to get ahead of the brewing unrest by becoming the first major-city police chief to call for Chauvin's arrest and calling Floyd's killing "a murder." And during a Tuesday press conference, Bettison choked up with emotion recalling how he felt when he kneeled during the standoff.

"Chief came and I didn't even tell him I kneeled," he said. "It wasn't about that. It was about the love I have for the city, and I didn't know how my peers would react to me kneeling. But what I want everybody to know is that I've got nothing but love for white officers, Black officers, everybody, thanking me for kneeling to support George Floyd. Nothing but thanks."

Detroit so far has not seen the looting or destruction that other cities have seen. It seems both DPD and many of the protesters are not interested in escalating the conflict to that point. In many ways, it feels like the city is still reeling from the bloody civil disturbances of 1967, more than 50 years later.

But let's not lose sight about why protesters are kneeling. They kneel because Chauvin created an unmistakable image of police brutality when he kneeled on Floyd's neck.

Police across the country cannot kneel and say that they are in solidarity with the movement if they're just going to create 1,000 more unmistakable images of police brutality.