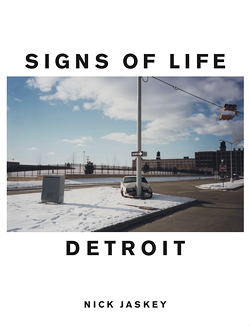 Since the advent of Instagram in 2010, Detroit artist and photographer Nick Jaskey has been generously sharing his images with the world, free of charge.

Drawn to the subtle imprints of humanity in a large city with a dwindling population, Jaskey, 35, has long described his photos as a collection of evidence, or "signs of life." But the images that have graced his highly revered 'gram are actually just scraps from the cutting room floor: Stashed away in Jaskey's house is an amassing stack of boxes, each filled with developed images snapped on jaunts through the streets of Detroit over the past two decades. Now, the best of the best of those images are ready for release, and they make up the 208 pages of his first photo book, Signs of Life.

The photos, shot from 2001 to 2016, depict a city in advance of an economic rebound and all of its sanitizing effects.

"When I first started shooting these photos, it was just stuff that spoke to me," Jaskey says. "It wasn’t until years later that I realized I'm in a very particular environment at very particular time."

The photos range from artful to journalistic: A "Fuck Dave Bing" finger-drawn on the back of a filthy city bus may remind longtime residents of the massive cuts to DDOT funding in 2009. In the same vein, a man watches through a hole in a fence as a wrecking crew begins tearing down Tiger Stadium in 2008. On the other end of the spectrum are photos of greater abstraction, like an attempt to remedy a gashed chainlink fence with a bike lock.

"A big theme in this book is just working with what you’ve got," Jaskey says as we flip through the pages.

The overarching theme, however, appears to be that art exists beyond the confines of gallery and museum walls — it exists all around us.

"Actual fresh art isn't created by artists or people who have a conceptual objective in mind, because otherwise it's just contrived and it's made by people with privilege," says Jaskey. "How could they have anything good to say?"

Below, Jaskey explains three images in his newly released book, Signs of Life. Nick Jaskey
Nick Jaskey: “To me, this is beautiful, this is funny, this is honest, it's slightly desperate, and it's untrained, but at the same time, it's aesthetically incredible and pleasing and it could be in a museum. I’m not interested in the stuff that's tailored or refined, I'm interested in the stuff that, like in this instance, is like, 'Ok, we’ve got some white spray paint, we’ve got some stencil letters, this is what we sell: Chips, two-cent candy, pops, bottled water, and everything’s ice cold.' It’s just a direct message. And then you’ve got the beautiful mauve building. It’s just too good to be true." 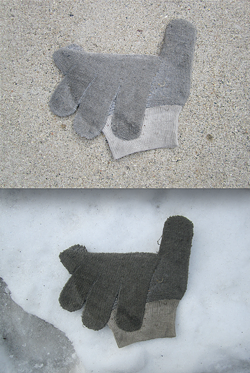 "I tried to include a lot of stuff that I shoot in a series. A lot of these images, I have hundreds of them and I tried to include a little taste of everything. Like these, I’ve been shooting gloves on the ground for over a decade and I just like the shapes that they morph into — these sort of abstract compositions. This particular one, I shot it here in the winter first and I must have shot it in the summer when the snow melted and didn’t realize it was the same glove. This is in the middle of nowhere and so, it's just like, the fact that this worked out like this is a little sad because that means I’ve got way too much time on my hands. But it's funny that it's framed the same way and it's just here with winter and here with summer.” Nick Jaskey
Jaskey: "This is a heavy image to me in the sense of, I know whoever decided to make that mark there didn’t make it in trying to create something conceptual, but it very much is a story of the way things are going for us right now. We’re fucked, nature’s fucked, there’s a big skid mark over all of us.”
Signs of Life is available online and in select stores throughout metro Detroit. More of Jaskey's work can be found on his website.