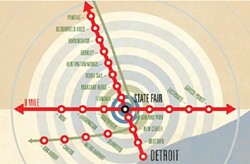 When members of the newly-formed Southeast Michigan Regional Transit Authority (RTA) Board meet for the first time this week, they will be greeted by activists eager to see the board play a role in helping to determine how the Michigan State Fairgrounds property is developed.

Why would that board be interested in the 157-acre parcel located at the intersection of Woodward Avenue and Eight Mile Road?

Members of the State Fairgrounds Development Coalition — a loose-knit collection of area residents, elected officials, businesses, nonprofits and others — contend that the site would be the perfect place for the RTA to establish a multi-modal transportation hub for the area.

Others, including some of the area’s leading transit activists and urban planners, agree. Located on the border of Wayne and Oakland counties, and close to Macomb County, the fairground parcel is uniquely situated to serve as a transit hub. That existing rail already runs along the eastern edge of the property makes it possible to establish a major transit center, which could serve commuter train passengers and traditional bus riders; additionally, riders who would likely use a new rapid bus system the RTA appears likely to pursue could use the facility as a base.

Here’s the hitch: The Michigan Landbank Fast Track Authority, which is now in charge of overseeing redevelopment of the property, is poised to sell the entire parcel to a private developer, Magic Plus LLC. Magic Plus is a partnership between former basketball start Earvin “Magic” Johnson, Lansing-based developer Joel Ferguson and Marvin Beatty, a former deputy commissioner for the Detroit Fire Department and current vice president of the Greektown Casino.

The plan is to build a sprawling shopping mall that features a movie cineplex and major retailers – including so-called “big box” outlets such as Home Depot. Restaurants, upscale townhouses and a senior housing complex are also part of the plan. So is a small train depot.

Ferguson previously told the Metro Times that transportation is key to the project’s success and the partnership wants to maximize the project’s transit potential. Doing so, Ferguson said, only makes sense. He also said that he would look to the state and city of Detroit to take the lead in determining what public transit options are pursued for the site.

Members of the State Fairgrounds Development Coalition, however, contend that establishment of the RTA, which was created after the Landbank Authority first sought bids and plans for the property, is a “complete game changer.”

Instead of having a development that includes mass transit as a component, what makes more sense, they say, is to create a project that has a multi-modal transportation hub as its centerpiece and then to build on the strength of that.

From what we could tell after coalition members met with state Sen. Virgil Smith last week, there seems to be consensus among all that vast improvements could be made to the fairgrounds project as it is currently envisioned.

The disagreement is over what stance to take from this point forward: Do they work with Magic Plus to help bring about at least some of the changes they seek? Or, do they try to build enough public and political pressure to force the Land Bank Authority to start the whole process over again?

That debate could be settled by what the RTA decides to do.

Established during a lame duck session of the state Legislature late last year, the RTA board will be composed of two representatives each from Wayne, Oakland, Washtenaw and Macomb counties. There will also be one represented appointed by the city of Detroit.

In addition to taking their ideas to the RTA, members of the coalition also intend to start making presentations to the political leaders of the counties participating in the RTA, as well as the city councils of towns along the Woodward corridor such as Ferndale and Royal Oak.

Smith, a Democrat whose district includes the fairgrounds parcel, is a key player in the whole issue; he authored the legislation allowing for the transfer of the property from the state to the Land Bank Authority.

Smith said with certainty that Gov. Rick Snyder and his administration would oppose anything that would slow down putting the land in the hands of private developers.

“Once this governor starts moving on something, he doesn’t stop,” observed Smith.

And, in this case, he agrees with Snyder to the extent that he also wants things to keep moving forward, and would oppose having the Landbank Authority scrap the current plans and begin the process all over.

To underscore his point, Smith cited conditions in some neighborhoods around the fairgrounds that are so desperate there’s no time for delay. Abandonment and crime — especially crime related to illegal drug activity — needs to be addressed; this project moving forward is a key to helping do that because of the economic benefits it will bring.

That view was not shared by some of the Magic Plus opponents who attended that meeting with Smith. Critics of the Magic Plus plan worry that it isn’t “sustainable,” and that a more progressive vision for the site should be pursued to ensure it remains viable far into the future.

Trying to incorporate that vision — creating a truly “transit-oriented development” that has mass transit as its cornerstone — into the Magic Plus plan is like “trying to mix apples and oranges,” said Ken Weikal, a landscape architect who worked with the coalition to help create an alternative plan for the fairgrounds.

Politician Smith offered to help broker a meeting with project partner Beatty, in the hope that a compromise could be found. The fear, Smith said, is that the conflict would reach a stalemate — and then “nothing will happen.”

There are a few things we here at the Hits don’t quite get:

One is the urgency expressed by Smith.

We understand that conditions in some of the neighborhoods around the fairgrounds really are desperate, and that the right project could help lift them up. But the crime, abandonment and despair have long existed there. In the long term, would it really make that big a difference if the Landbank Authority reopened the process?

It is hard to see how taking another three to six months to reevaluate the situation — especially in light of the RTA being created — would be worth the long-term consequences of rushing ahead.

Here’s the other thing that we think is bewildering:

The deal currently being pursued by the Landbank Authority is for the entire 157 acres. Magic Plus would own all of it. Meaning that, if the RTA did try to pursue placement of a multi-modal transportation hub at the site — and there’s good reason to believe that federal money would be available to fund such an endeavor, say advocates — then the RTA could well find itself in a position where it will be forced to pay a private developer for property that is currently owned by the public.

We asked Smith at the meeting if, from a public policy point of view, that made much sense.

“I wouldn’t say it’s good public policy,” he replied. Then he returned to the notion that the cost of delay is too great for the people living around the fairgrounds. The current process has to keep moving forward, he insisted.

Coalition member Karen Hammer, a resident of the Green Acres neighborhood who is opposed to the Magic Plus development, said whether the goal is compromise or restarting the process, building a broad base of support for the group’s alternative vision is crucial.

What’s important for the public to realize, she said, is that as long as the property remains in the hands of the Landbank Authority, the opportunity to make changes remains.

“People think this is a fait accompli, and that nothing can be done at this point, but that couldn’t be further from the truth,” she said.