Detroit cops are not particularly altruistic (or most cops, really) 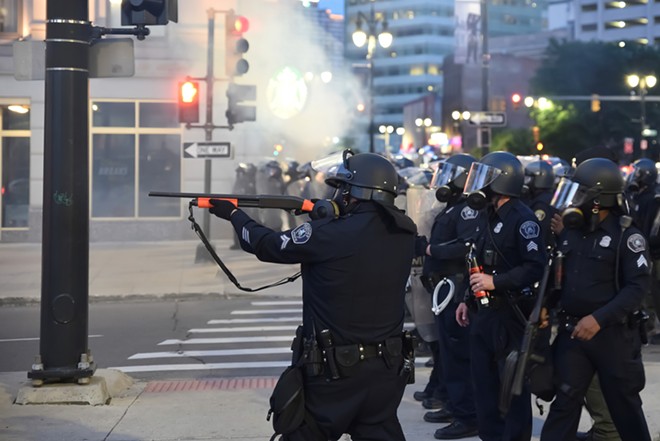 Police officers like to think of themselves as a brave "thin blue line" that keeps society from spiraling into chaos, but most of them can't even bother to get a little "Fauci ouchie" to help stop the spread of the COVID-19 pandemic.

That's our main takeaway from a new report from Bridge Michigan, which found that only 39% of the Detroit Police Department have been vaccinated against the deadly virus that has killed more than 20,000 Michiganders and 600,000 Americans.

It's also despite the fact that DPD officers have been eligible to receive the vaccine since December, well before the rest of the state's population.

"Officers are no different from the rest of us," DPD assistant police chief Todd Bettison told the magazine, who, for his part, got vaccinated early in an attempt to "lead by example."

"So it's the same thing that we typically hear with citizens in general," he added. "They have the same emotions, same fears."

To be fair, the vaccination rate lags in Detroit overall, where just 36% of the eligible population have been vaccinated, according to the city's dashboard. That's compared to 60% of the state overall, according to Michigan's dashboard, a number reflected in Wayne, Oakland, Macomb, and Washtenaw Counties. Many have attributed Detroit's vaccine hesitancy to distrust of government, with the infamous Tuskegee experiment often cited, when the government let hundreds of Black men suffer untreated syphilis for 40 years for research in exchange for what they said was free health care.

But it's not just a Detroit problem. (Plus, more than 75% of DPD's police force resides outside the city limits, anyway.) According to the Washington Post, police departments across the country have seen lower vaccination rates than the general public. There is also a partisan divide: while eight in 10 Democrats have been vaccinated, fewer than half of Republicans have.

Experts say low vaccination rates among law enforcement officers jeopardize the health and safety of both other officers — as well as the general public that they allegedly serve.

"The problem is that (low vaccination rates) will potentially have greater risk for police officers and cause potentially greater risk for the communities that they serve," Debra Furr-Holden, the MSU public health professor, told the magazine. "First responders, health care workers, essential workers, are so vitally important because they’re both members of the community at elevated risk for exposure and an elevated risk for spreading."

When the virus came to Detroit last year, it hit DPD particularly hard, forcing 650 out of 2,500 employees to quarantine, including former DPD Chief James Craig.

We can understand mistrust of government — that's what these anti-police brutality protests are all about. But cops not trusting the government is... well, pretty weird, to say the least.