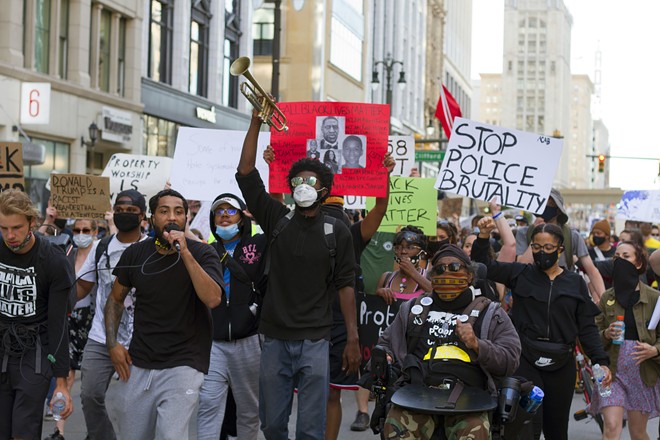 The City of Detroit isn't done with its legal battle against protesters of police brutality and racial injustice.

In a new filing Wednesday, the city is asking a judge to reconsider her decision on March 10 to dismiss its controversial countersuit against Detroit Will Breathe protesters. U.S. District Judge Laurie J. Michelson said the city failed to show that demonstrators conspired to commit acts of violence and vandalism over the summer.

In its motion for reconsideration, the city argues it adequately demonstrated that protesters conspired to assault police officers. The city points to videos of protesters “hurling dangerous projectiles at police officers, blocking busy streets and school buses, encouraging violent behavior, screaming loudly in the faces of DPD officers, refusing to follow clear and lawful DPD directives and destroying and defacing public property.” In addition, the city says that “videos show speakers encouraging violence or endorsing violence against police officers, promoting the destruction and defacing of property, and disrupting the lives of Detroit residents.”

Metro Times attended more than a dozen of the demonstrations. On the few occasions that violence did break out, the city blamed the violence on suburban and out-of-state “outside agitators.”

The city filed the countersuit in response to Detroit Will Breathe’s lawsuit in August that alleged police used unnecessary, excessive force to break up peaceful demonstrations against police brutality.

Jack Schulz, an attorney for the National Lawyers Guild, which filed the lawsuit, said the city presented no new evidence in its latest motion.

“Motions for reconsideration are reserved for when the Court has made a concrete defect in its decision and not to simply present the same argument again. Here, the City is doing the latter,” Schulz told Metro Times in a statement. “It is still unclear what the alleged conspiracy was, who was involved in it, and who was allegedly hurt by it.”