‘Every day the Packard Plant sits here in this state is a day this neighborhood cannot move forward,’ Mayor Duggan said 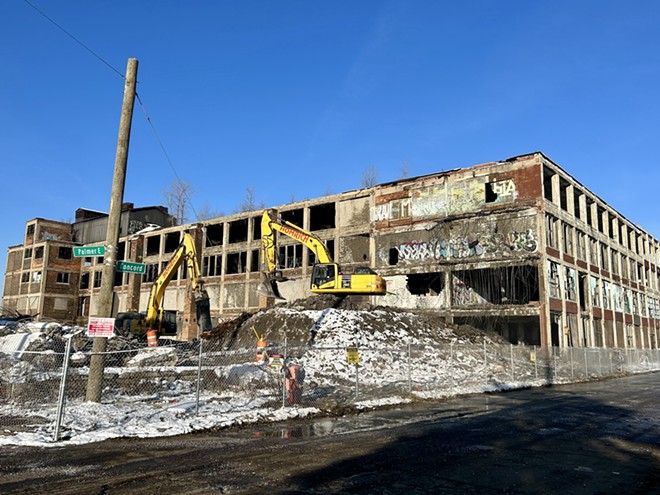 Crews on Tuesday began demolishing another large section of the hulking, abandoned Packard Plant on Detroit’s east side after the negligent owner failed to do it himself.

This is the second block-long building that will come down since crews began an emergency demolition of a section of the former auto plant next to an operating business, Display Group, north of Grand Boulevard, in September.

Under the latest demolition project, which has an estimated cost of $1.2 million, crews will raze a section of the plant on Concord Avenue between Palmer and East Grand Boulevard. It’s expected to be complete by March, though the city will salvage a small portion of the building with hopes of finding a developer to reuse it.

“We are truly trying to go from blight to beauty as an administration and a city,” Joshua Roberson, District 5 manager for the Department of Neighborhoods, told reporters Tuesday morning.

The building is the last portion owned by the city, which acquired the property in a tax foreclosure.

The rest of the blocks-long, 3.5 million-square-foot plant is owned by Peru-based developer Fernando Palazuelo, who bought the concrete ruins for $405,000 in December 2013 and pledged to turn the plant into a mixed-use space with lofts, offices, restaurants, and retailers. The estimated price of the project was $350 million.

But since the purchase, Palazuelo has failed to find future tenants for the building and has accumulated nearly $785,000 in unpaid taxes and water fees. He could soon lose ownership rights to more than 30 parcels and buildings at the Packard.

He was ordered to demolish the structure in March 2022 after the city declared the 35-acre plant a public nuisance.

“Every day the Packard Plant sits here in this state is a day this neighborhood cannot move forward,” Mayor Mike Duggan said. “We are deeply appreciative to Gov. Whitmer for the $12 million the state allocated to us late last year that we plan to use do demolish as much of the plant as we can.”

The Packard Plant is the largest abandoned auto plant in the city. 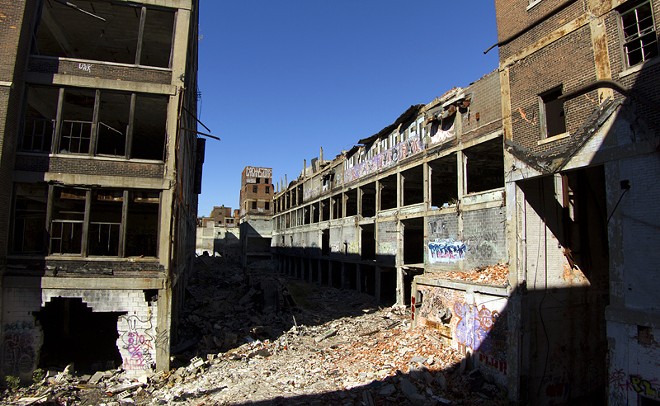 In the early 1900s, the plant, designed by famed architect Albert Kahn, became a proud symbol of Detroit’s industrial rise as it churned out luxury automobiles and decent wages to thousand of workers. It is now one of the largest abandoned auto plants in the world, and has become a lawless wasteland.

The demolition is part of an “aggressive demolition program” to raze abandoned commercial buildings scattered across the city, said LaJuan Counts, director of Detroit’s Demolition Department.

“Although this portion is significant for us, we have a huge commercial endeavor we are undertaking to remove a lot of commercial blight across the city,” Counts said.

“It shows our commitment to eliminating blight across the city,” Counts said.

Crews on Tuesday began demolishing another large section of the hulking, abandoned Packard Plant on Detroit’s east side.