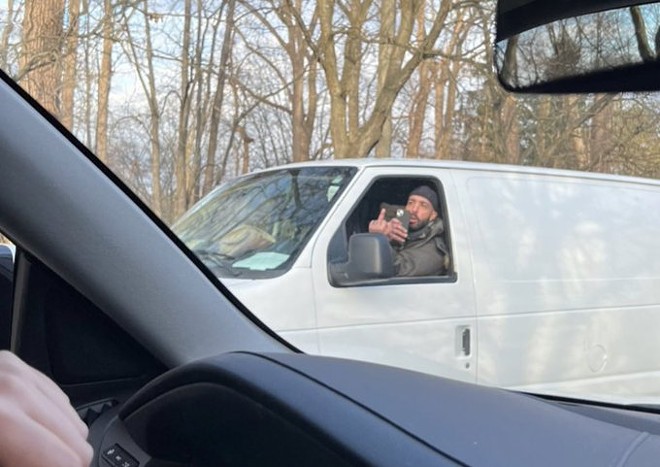 Twitter/StopAntisemitism
Hassan Yehia Chokr is accused of hurling derogatory remarks at Jewish people outside Temple Beth El in Bloomfield Township.
A Dearborn man was charged with two counts of ethnic intimidation after police say he harassed and threatened Jewish families outside of a Bloomfield Township synagogue and preschool on Friday.

Hassan Yehia Chokr, 35, was arrested a day after his tirade outside Temple Beth El, where parents were dropping off their children for day care.

“Anti-semitic and racist threats, or ethnic intimidation of any kind, will not be tolerated in our community, and every such incident will be investigated and prosecuted to the fullest extent of the law,” Oakland County Prosecutor Karen McDonald said Sunday in a statement.

Bloomfield Township police officers pulled over Chokr immediately after the incident, and he streamed the encounter live on Instagram.

“I was just asking people if they supported the state of Israel, and they were telling me, ‘Yeah.’ I was telling them, ‘How dare you?’” Chokr said.

He insisted he was there to “express my freedom of religion.”

“I proved my point and left,” he told an officer. “I didn’t start any problems.”

He then called two security officers at the synagogue “[n-word] bitches,” which he described as “slaves to the wrong master.”

Chokr declined to provide identification, saying he did nothing wrong.

He also told the officer that he planned to go to another synagogue, but would not return to Temple Beth El.

The officer didn’t press him, and even gave Chokr a fist-bump before allowing him to go.

According to the group StopAntisemitism, Chokr hurled expletives and derogatory remarks at Jewish people.

“Those who espouse hate and are motivated to commit crimes against specific populations or communities because of that bias threaten the values we hold scared as Americans,” Nessel said. “As Attorney General, I created a dedicated unit to investigate and prosecute bias-motived crimes. My Hate Crimes and Domestic Terrorism Unit works with federal and local law enforcement partners to ensure crimes of this nature are thoroughly investigated and prosecuted to the fullest extent of the law. No one should fear for their safety because of who they are, where they worship, who they love — or any other unique attribute that contributes to the diversity of our state.”